The big event in sport over the weekend was the final of the Cricket World Cup, but first, sadly, the topic is racism and Tony Abbott’s extraordinarily offensive “lifestyle choices” remark.

In brief, Tony Abbott indicated that Indigenous people could no longer be "supported" by the Australian taxpayer, to live on remote lands they’d called home for forty thousand years. Natalie Cromb and Laurence Keim and others have dealt with the topic, and I encourage you to read what they have to say.

However, this morning, as I was laying out the sport column in my mind, I came across the comments of an Indigenous Aussie rules player, Mathew Stokes and so would like to report on that.

Stokes plays with the Geelong footy club and has written an open letter to the prime minister, which can be found on the club’s website.

In it, Stokes declares that he is not really into politics, but in the weeks after the remarks from Tony Abbott, that this was a topic of conversation among Mathew and his mates.

The comments from my circle of mates ranged from ignorance, misinformed and that old Australian way of using humour to get away with some pretty offensive statements.

I thought to myself at the time, if that is coming from the mouths of my mates – many who are educated and have some understanding of Aboriginal and Torres Strait Islander issues – imagine the conversations going on at smoko all over the country!

So my open letter today is not about politics, or a commentary on what we as a country do right or wrong. It’s not about past decisions made, dollars spent or programs funded. It’s about the damage caused by one single statement.

It’s about the disharmony that can come from one man’s words.

These are my thoughts, right or wrong, this is my opinion. I am willing to cop the criticisms this letter may bring but it’s all worth it because I’m passionate about issues facing Aboriginal and Torres Strait Islander Australians.

One good thing to come from this is to see many Australians – of all backgrounds – come out to support the Close the Gap, Not Communities message. I encourage people to continue to listen, show respect and care for each other.

So well said Mathew, I’m guessing that when he made the "willing to cop the criticisms" remark that he was aware that Adam Goodes copped, bizarrely in my opinion, criticism from that perennial fool, Miranda Devine, for bringing racist remarks made against him to the attention of match officials during a game against Collingwood.

Anyway this is a great example of a sports person using their celebrity to make a clear and present statement that needed to be made, for, in this case, the advancement of the rights of Indigenous people in Australia.

And so to a more regulation sporting topic, the cricket. The World Cup wrapped up on Sunday just past, with Australia taking on New Zealand in Melbourne.

I have to give credit to our editor, Dave Donovan, at this point. A couple of weeks ago, I tipped India to play New Zealand in the final; Dave said Australia would play New Zealand with Australia to win comfortably — and so was he fully right? 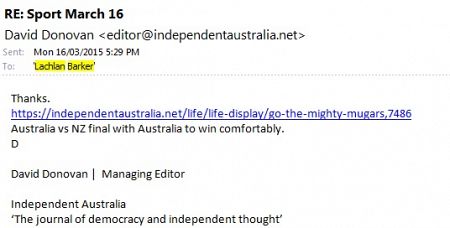 Well New Zealand won the toss and elected to bat, their openers strode to the wicket and immediately the fireworks started. New Zealand captain Brendon McCullum obviously had a plan and that plan seemed to be: don’t think, just attack.

For the first ball of the innings from Australian fast bowler Mitchell Starc, saw McCullum swing wildly and miss. Facing the second ball, he charged down the wicket wildly and missed. Then the third ball he just missed, and was bowled, a brilliant yorker from Starc, New Zealand 1-0 in the first over.

In many ways the game was over there as McCullum has been a cornerstone of New Zealand’s batting in this tournament, and his loss – in such wild fashion - seemed to rattle his team.

McCullum’s opening partner, Martin Guptill scratched around and was dismissed in the 12th over for 15, then Kane Williamson went in the next over for 12.

Then Grant Elliott (83) and Ross Taylor (40) righted the ship for New Zealand, but even then supremely tight, concentrated bowling from the Australians made it had for the Kiwis to score freely, Taylor for instance took 104 deliveries to score his 40, and this put New Zealand further behind the 8-ball.

When Taylor went in the 36th over, with the score on 150, it signalled a collapse and the men in black then lost their remaining six wickets for 33, to end the day on 183.

Starc (2-20 from 8), Mitchell Johnson (3-30 from 9) and James Faulkner (3-36 from 9) – Faulkner dismissed both Taylor and Elliott to end the New Zealand recovery – were the picks of the bowling for Australia.

Australia then went to the wicket and finished things off in a professional, somewhat anti-climactic, fashion.

LISTEN to the reaction of #AUS fans after Australia won the World Cup at the @MCG! https://t.co/Pb6afANf1i

This was Clarke’s final one day international match and so it was great to see him contribute to the victory, the only slight downer on the full Cinderella story was that he wasn’t there at the end, dismissed by Matt Henry eight runs short of the target. But no matter, the Australians won the day, and Clarke can be happy that his retirement from one day cricket came on a high point and at a time of his choosing. Steve Smith will almost certainly take over as captain of the one day team.

So our editor got it completely right, while I, in a step up for me, was at least halfway there.

With cricket over for the first part of the year, our attention turns to the football field and the netball court, but I for one will be mostly following the reaction to Mathew Stokes’ powerful open letter.

Let’s hope that his comments are part of the process that leads to more and better work on Closing the Gap and improving life for Australia’s Indigenous peoples.