With the announcement that UK Home Secretary Priti Patel has green-lit Julian Assange's extradition to the U.S., there is widespread concern for his health and rights.

This article and video from 2019 detail the event Independent Australia and QCCL held to raise awareness for the plight of WikiLeaks founder Julian Assange, featuring his father John Shipton.

DESPITE THE oppressive humidity in a Brisbane hall packed to twice its capacity, the attention of the crowd did not falter. All eyes were on John Shipton as he spoke quietly and eloquently, detailing his son’s torture and labelling his incarceration in the UK "judicial kidnapping". John’s son is Julian Assange, currently rotting in Belmarsh Prison in the UK, awaiting potential extradition to the U.S. and facing 175 years in prison.

The conditions under which Assange is being held are worse than those of mass murderers and child sex offenders. Essentially in solitary confinement, he is not permitted internet usage. His visiting rights are limited to two half-hour visits per week. He cannot contact family or friends and his ability to prepare his own defence has been severely thwarted.

This, according to UN Special Rapporteur on Torture Nils Melzer, is:

"prolonged exposure to psychological torture … and abuse [which] may soon end up costing his life.”

The event, co-hosted by Independent Australia and the Council of Civil Liberties (QCCL) was intended to mobilise support for the journalist and WikiLeaks founder. Managing editor David Donovan and executive editor Michelle Pini interviewed Mr Shipton, along with anti-war activist Ciaron O’Reilly.

John Shipton spoke of his son's commitment to truth-telling and said of his son:

"Not once has Julian complained. Not once did he complain or moan about his situation. I don’t know if he thinks it’s worth it, but as far as I can see from the outside, his resolve is undiminished… I’ve never found any bitterness in Julian..."

Where Julian is popular Is at the extremities of empire – he’s really big in Bangladesh... and the Congo – where he’s not popular is at the centre of empire. There's a lot of hostility in the UK and there was quite a lot of general sympathy with the liberal Left in the U.S. until Clinton blamed her election loss on WikiLeaks. There's a lot of scepticism in Australia.

Mr Shipton said the allegations against his son amounted to a distraction tactic to divert the limelight from the war crimes WikiLeaks exposed, and that this was the reason Assange is not receiving diplomatic assistance:

This is deliberate persecution of an Australian citizen...

Julian has had 100 consular "assistances" in one form or another, which is a testament to failure because he’s there [in Belmarsh prison] still...

You, and us together, hold Julian up. Not the politicians or the big wigs. It’s us — we hold him up.

Journalists can add their name to the International Journalist Statement in Defence of Julian Assange HERE. 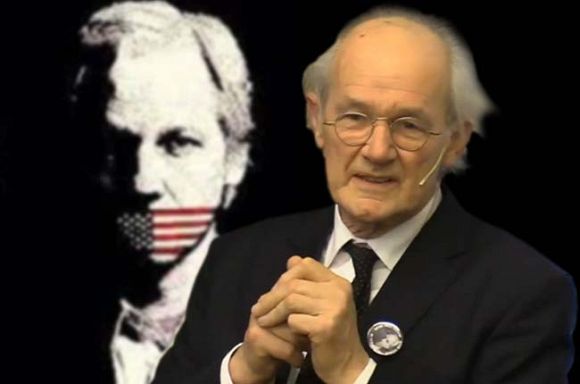 The father of WikiLeaks publisher, Julian Assange, spoke at two conferences in Italy.

27 January 2023, 3:00pm Self-professed property maven Dominique Grubisa is back into selling her predatory ...

16 December 2022, 1:00pm Unlike many of our competitors,  we are not run by billionaire media barons.