EDITORIAL EXCERPT: The two major parties are not the same — Wayne Swan

Many Australians are rightly concerned that the Federal Opposition – newly empowered by facing an unpopular minority Government – has, by passing the Assistance and Access Bill — endangered the civil rights of ordinary Australians.

Opposition Leader Bill Shorten and the Labor Party have received a significant amount of criticism for passing, unamended, this digital encryption bill last week — the last sitting week of Parliament for the year.

Many say they did so to nullify criticism by the Government about Labor being soft on security issues, which will result in Australia having the most far-reaching legislation in the world, undermining the security for everyone.

After providing excellent coverage of the issue on Monday (10 December 2018), IA columnist Dr Jennifer Wilson concluded that the

… only way Federal Labor knows how to deal with the LNP is to capitulate to its demands, and this has been the case, over and over again for decades. The message Labor sends to Australians by its behaviour is that the bullies win .… The Labor Party is beginning to resemble the eternal victim in an abusive relationship, so battered they lack all will to take a stand against their abuser.

Whilst there is some truth in this view, perhaps suggesting that the ‘only way Federal Labor knows how to deal with the LNP is to capitulate to its demands’ is going too far. Whilst Labor does all too often submit to the will of the Coalition on matters relating to refugee detention and national security − about which this publication has been stronglly critical of them on innumerable occasions − in a great many other areas, the distinctions between the two major parties are definitive.

Some of these stark differences between the Government and the Opposition were elucidated by former Treasurer and Deputy Prime Minister Wayne Swan in his Parliament House office last Thursday.

Had a great time in Canberra this week. With @vmp9 and @JohnPassant, how could it be anything else? pic.twitter.com/syP31it6Mv

“In the last 25 years, there has been a massive increase in the wealth of Australians,” said Wayne Swan. “However almost all of it has gone to very few people. It’s very clear that we need a policy framework that rewards the people that do all the work.”

“We’ve got to have a strong economy, and a system of progressive taxation that rewards initiative, effort and investment. We need an economy driven by good fiscal and economic policy. Quality universal health care and education, and a decent retirement system.”

The Liberal Party’s agenda, on the other hand, said Wayne Swan, was all about trickledown economics:

… the Coalition’s answer to everything is to cut taxes and give the tax cuts to those that have the most. And give less to those who have the least. The whole trickle-down agenda of theirs, which has been categorically disproven, clearly isn’t working. What Australians need is a much more inclusive set of economic policies.

Swan was also scathing in his summation of the current Government’s internal discord and warring factions. This is an area in which Swan has much experience, having survived the turbulent Rudd-Gillard-Rudd years. He says the Labor Party has definitely learnt its lessons.

Certainly, in recent years, the ALP has presented itself as a unified force. Even a cursory glance at the Abbott-Turnbull-Morrison Government disunity and desperate tactics last week confirm Swan’s view that the Coalition is “just hopeless” and without “any saving graces".

You can see that they’ve given up on themselves.…

There’s no sense of a collective mission. They’ve given up doing anything other than protecting their own personal survival.

Whilst it’s true that there are areas of policy in which the Labor Party could be more progressive, or distinguish itself more clearly from the Government, there are demonstrable differences. Some of these have been outlined above, in key areas affecting living standards of the majority of Australians.

Indeed, there is a danger in saying that Labor and the Government as “just the same”. Doing so runs the risk of encouraging swinging voters to return this dysfunctional, directionless Coalition Government for another term.

And that would be a disaster for this nation.

"This stupid idea, endlessly advocated by right-wing ideologues, is what has brought America undone. We don't need it." @SwannyQLD calls time on the era of trickle-down economics: https://t.co/Z0TjbHJZ3o

This is only half the story. The full version of this editorial was originally published as part of the Independent Australia weekly newsletter and is also available to subscribers online in the members only area. 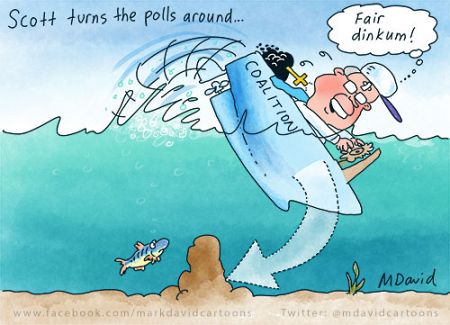