The Garden at the End of the World: don't look away

David Donovan reviews Australian film-maker Gary Caganoff's award-winning and confronting documentary about Afghanistan: 'The Garden at the End of the World'. 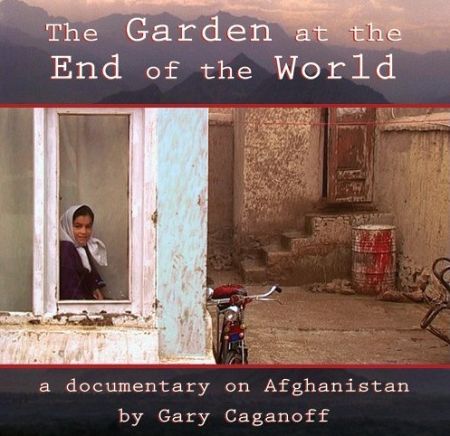 Sometimes, it is easier to look away than to look.

Afghanistan is like that. Yes, we see the pictures on the news: a few minutes of soldiers and sand, some puffs of smoke, a quick piece to camera by a helmeted reporter, some serious words overdubbed over some scrubby hillsides and then on we go to the next story. We see this story told from the comfortable perspective we hold of the conquering western militia, a view that ignores the solemn and disturbing reality that this country is actually someone’s home. That the people in the background are real people that live in Afghanistan every day — they are not soldiers who will one day be able to turn their backs on the horror. They are real human beings, like us, who somehow need to carry on with their lives, no matter how desperate, while the world around them grinds them down through violence, chaos and fear.

The documentary film The Garden at the End of the World is a movie that asks people to look at the human cost of the current debilitating US-led conflict, along with the previous calamitous Soviet War, that has turned the country – and its capital Kabul – from a flower-strewn tourist mecca, and a much loved part of the hippy trail in the 60s and 70s, into the mortar pocked, disintegrating, eyesore it is today. And though it may be easier to pretend not to hear, we should listen to film-maker Gary Caganoff when he asks the bleak question in his narrative:

“What happens to a country when all the young men are dead?”

This is the tragedy of Afghanistan, a country that has been ruptured by war for over 30 years —infrastructure destroyed; families sundered; men slaughtered; and children abused, orphaned and abandoned. And, since the Taliban cruelly prevented the nation’s women from being educated or being able to work, they are left to survive by their wits alone without any skills by which to prosper.

Filming on his own, without crew, Gary Caganoff – an independent filmmaker of 20 years experience – tells the story of two Australians: recognised permaculture expert Rosemary Morrow and former Afghan refugee Mahboba Rawi—who established the charity Mahboba’s Promise to help orphaned, homeless, Afghani children, of whom there are some 60,000 on the streets of Kabul today.

Of course, there are scenes of deep sadness and starkness as the camera traces the disintegrating city streets and buildings, shows the gaunt faces of the children, the poverty of the people and even ventures below-ground to the former torture chamber at the unofficial prison next to the Pul-e-charki prison. Caganoff claims to be the first person – local or foreign – to film or take pictures inside this gaol and there is a horrorifying sequence when he finds hand-drawn pictures of torture drawn on the walls of the dungeon by desperate condemned former prisoners.

But, there is also always hope. We are inspired by the stoic courage and kindness of Mahboba’s uncle, Haji Fazil, who runs the Kabul operations of the charity. And resonant in the mind once the movie is finished are the images of smiles on the faces of the children and their carefree laughter. Despite tragic tales about some of these poor waifs being kidnapped and abused, and their parents killed – despite some of them not ever having received enough nourishment in their brief lives, so they are small for their age ― the children of the orphanage are all beautiful, and they smiled, played, laughed – and fought between themselves – just like other children would. Sadly, again, through the deprivation and disease they had struggled against before reaching the orphanage, some of the children shown are destined not to reach adulthood.

Caganoff said he was moved by the beauty and good nature of the people:

“I believe the film is so real that it puts you in Afghanistan and you can’t fail to put aside your differences and make a connection with these amazing beautiful people.

“Everywhere the people were friendly. Some looked as if they had never seen a video camera before. Maybe not even a camera. So they wouldn't shy away. They just stared at me doing what I was doing. Some of them I focused on to get very personal intimate shots that are in the film. My fave is the old tailor man with the tape measure around his neck and the dust subtly blowing across his face. A gentle soul.”

Gary Caganoff describes himself as “Jewish with Buddhist sympathies”, yet the film was honoured in 2010 with a Human Rights award by the World Association for Christian Communication (WACC) and SIGNIS (the World Catholic Association of Communication). The film was also been part of the official selection at three international film festivals: Berlin, Florida, and NZ. Despite these accolades, for reasons difficult to understand, it has been entirely ignored by the mainstream media in this country.

The production of The Garden at the End of the World was mainly funded by Caganoff himself, but with the support of Screen Australia, the Documentary Foundation Australia and private donations. He has plans to film part two of The Garden, but says raising funding for documentary film-making can be problematic.

“Documentary film making is not done for fame or fortune….it's so damned frustrating and so hard to get industry support,” he says.

You can help Gary Caganoff further document the valiant lives of these downtrodden people, and bring wider public awareness and support for their plight, by buying a DVD of this confronting, yet ultimately inspiring and uplifting, film. Even though it might be far easier to turn away and not watch this important film, it is important for us in the privileged west to count the human cost of our futile wars. Indeed, it seems the least we can do.

To help the orphans of Kabul by donating to Mahboba’s Promise, click here.
FILM AND DRAMA Afghanistan charity David Donovan Gary Caganoff hippy trail Screen Australia SIGNIS The Garden at the End of the World WACC