Condamine fire: CSIRO called out over conflict of interest with GISERA

Make no mistake, the Gas Industry Social and Environmental Research Alliance's (GISERA) role is to spread misinformation about CSG, mostly that it is safe. The claim that fracking isn't to blame for the methane gas bubbling up through the Condamine River is debunked by weight of evidence. Lachlan Barker reports.

LAST WEEK Greens’ MLC Jeremy Buckingham set fire to gas seeping from the Condamine River in Queensland. Buckingham did this to demonstrate the out of control nature of the gas industry in Queensland, particularly on the Darling Downs.

Since that video went live, it has had over 4 million views and brings to mind the iconic footage from the U.S. documentary Gasland, which showed water coming out of a tap being ignited in the kitchen sink.

So clearly there is a problem on the Condamine and Buckingham has done Australia a great service by highlighting how bad the situation has become.

However, since then, various major news outlets have printed a “rebuttal”, claiming that this gas seepage is more likely natural and the gas industry cannot be linked to it.

Here is one example from The Guardian: 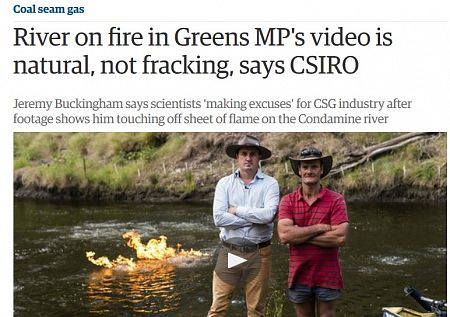 Jeremy Buckingham (l) and local resident John Jenkyn at the site of the gas seep on the Condamine River.

However, Buckingham and a large proportion of the Darling Downs residents do not believe this seepage is natural. Or perhaps if it is, then the ferocious onslaught of CSG wells in the area has caused it to increase.

So we have two parts to this story: is the bubbling in the Condamine natural? And just how independent is the CSIRO on this issue? So I’ll deal with the CSIRO independence issue first.

And the answer right off the bat is no, the CSIRO is not independent in this issue and their statements cannot be trusted.

The “CSIRO” scientist quoted in thatGuardian story is Damian Barrett. Now he is actually a director with GISERA — the Gas Industry Social and Environmental research Alliance.

GISERA is simply a CSG industry PR front, somewhat similar to the Minerals Council of Australia.

Here is a screen grab of their home page: 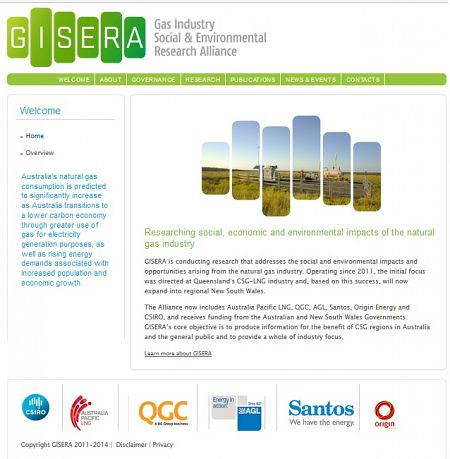 So since this was clearly a gas industry front, I contacted CSIRO media to ask if Lock the Gate or any other community group opposed to CSG had been asked to join this alliance to provide a counter view to that of the gas companies.

Here is their reply:

The makeup of the GISERA Research Advisory Committees (which is responsible for determining which research projects are undertaken and how the research funding is allocated) is dominated by external stakeholders who do not have an interest or connection with the gas industry.

These members also do not have a stated public position on the gas industry operating in a region. For this reason we do not have members of any advocacy group that is either opposed (including Lock the Gate) or represents gas industry interests (e.g. APPEA).

This, along with complete transparency of work done under GISERA, provides the independence and balance that ensures CSIRO’s research is trusted.

I was flabbergasted to say the least, to read that the CSIRO are claiming no connection with the gas industry when the gas companies’ logos are there clear as day on the home page.

So I thanked the media rep for his reply, then as an afterthought asked:

PS: sorry to trouble you again, but can you explain why the gas companies logos are on the Gisera home page?

Is this out of date? It seems to belie the: 'do not have an interest or connection with the gas industry. ' part of the statement.’

I got no reply to that.

However, the connection between the CSG industry and GISERA is brutally clear and I can assure you that their research is not trusted by me nor a large number of people living on the Darling Downs.

So then I went to check out the research that Barrett was claiming to show this gas bubbling in the Condamine was a natural event. I went to the GISERA research page. At the bottom of the page I clicked the details link, then I clicked the Methane seepage in the Surat Basin link.

That opened up a .PDF within which was this:

APPEA – the Australian Petroleum Production and Exploration Association are the main rabidly gas-biased organisation in the country, repeatedly caught out – by me for one – spreading constant misinformation that CSG is safe and that the industry is welcomed with open arms by farmers across the nation.

But more to the point, you may recall that in my reply from CSIRO media, they specifically said that APPEA were not asked to be part of GISERA.

To refresh your memory:

‘For this reason we do not have members of any advocacy group that is either opposed (including Lock the Gate) or represents gas industry interests (e.g. APPEA).‘

Yet here we see evidence of APPEA funding the organisation to the tune of half a million a year.

So, make no mistake, GISERA is simply there to spread misinformation about CSG — mostly that is safe and, in this case, the methane gas bubbling through the Condamine is nothing to do with the gas industry.

So then we turn to the question: is this methane bubbling through the Condamine a natural occurrence?

I can’t answer that definitively, but I can tell you that the weight of statistics are definitely on Jeremy Buckingham’s side.

The earliest confirmable recording of the bubbling in the river is in 2012. I have looked deeper and can find no recording of if before then. There may have indeed been gas bubbling through the water before then, but if it was, is seems to have been so small that no one noticed it.

The coal seam gas industry in Queensland really got moving in 2008; at that time there were 878 wells in Queensland, most on the Darling Downs.

By 2012, when the gas seeps were first noticed/appeared, that number had quadrupled to 3508, again most on the Darling Downs.

This graphic shows that all too well: 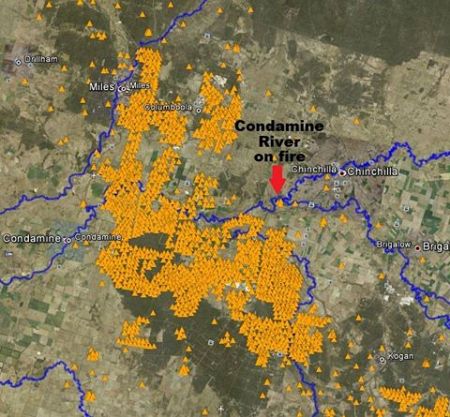 There are a small number of wells immediately near the gas seep that Jeremy Buckingham lit, however since gas can migrate up to 10 to15 kilometres, a vertical well does not have to be directly next to a gas seep to have caused it.

This graphic from 8020Vision gives a general indicator of that: 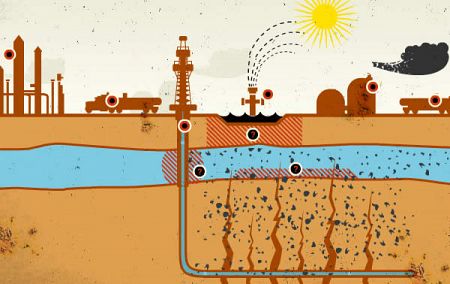 So while it cannot be said that the CSG wells in the immediate area definitely caused the gas seep in the Condamine, by the same token, GISERA’s claiming it is a natural occurrence is fanciful to say the least.

What we can say is that the gas seep in the Condamine to which Jeremy Buckingham set fire was not recorded before 2012 and the seep’s appearance coincided with the number of CSG wells in Queensland increasing fourfold from 878 to 3,508.

There are now 7,331 wells in Queensland, stretching from the Darling Downs up to Gladstone. 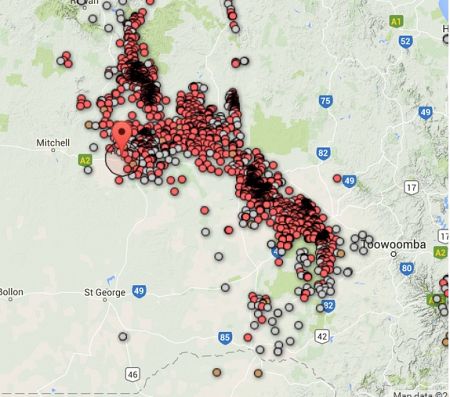 This coincides with the amount of gas bubbling through the river intensifying. It’s a problem by the way because at the very least it is adding to Australia’s fugitive emissions and methane is approx 25 times worse than CO2 as a greenhouse gas. So we need to find out what’s going on and put a stop to it as soon as.

So at the end, it is impossible to believe that the CSG wells have had no affect on the geology of the Condamine River.

Also, you may recall that when I covered this topic before (April 2015) with IA deputy editor, Sandi Keane, the Department of Natural Resources and Mines (DNRM) admitted via email: ‘we may never determine the cause’.

So if the DNRM are admitting that the cause may never be known, it is hard to believe Damian Barrett when he claims this is a natural thing.

Yet even Barrett admits the gas seepage is increasing and so here is what I propose as an experiment.

We shut down all the coal seam gas wells on the Darling Downs for 20 years and see if that alters the intensity of the gas bubbling through the river.

It’s an experiment, but it ought to tell us something.

Worth doing a checklist of the number policies listed on #IPA's manifesto introduced by Abbott/Turnbull, i.e. #72: Privatise #CSIRO! #auspol