AN EMAIL seemingly sent by accident to Independent Australia, reinforces long-held suspicions by the media and environmentalists that regulation of the CSG industry in Queensland is chronically under resourced and, worse, advances the special interest or commercial concerns of the very industry it is supposed to regulate — a practice described as “regulatory capture”. Anti-CSG campaigner Drew Hutton told IA that his book, ‘Mining the Queensland Way’, documents case after case where the interests of the mining industry have trumped those of the public.

Following reports from a local source that gas leaks in the Condamine River near Chinchilla in southern Queensland appeared to be on the increase (with new bubbling found in nearby Wamby Creek), IA contacted the Department of Environment and Heritage Protection (EHP) to see if CSG activities were the cause.

The EHP forwarded IA’s email to the CSG Compliance Unit of the Department of Natural Resources and Mines (DNRM). (It should be noted that there is no independent statutory authority for environmental breaches such as NSW’s Environment Protection Agency.)

And here is where things went pear-shaped for the author of the email — DNRM’s Media Manager, Paul Lynch. Instead of simply ‘replying’, it appears he mistakenly pressed the ‘reply all’ button and so the following email turned up in the in-tray of IA journalist, Lachlan Barker, revealing a culture which should be of concern to all Queenslanders: 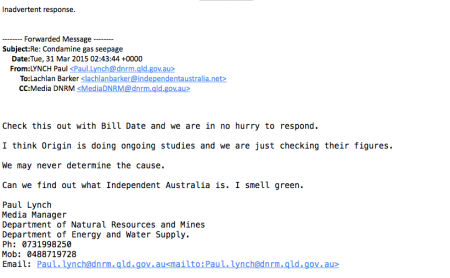 Bill Date is the executive director of the CSG Compliance Unit.

appears to be a delay tactic used for dealing with media enquiries about CSG non-compliance.

'I think Origin is doing ongoing studies and we are just checking their figures...’

‘We may never determine the cause...’

suggests the CSG Compliance Unit will do a cursory check of whatever Origin sends them and not be too worried if the cause can’t be found. (The two closest gas tenements to the site of Condamine leaks are Origin’s and Arrow Energy’s)

IA is not suggesting that the CSG Compliance Unit at DNRM is a "patsy" for the CSG industry but this flies in the face of the stated aims of the Compliance Unit for stringent monitoring.

On the relevant Queensland Government web page it says:

Coal seam gas (CSG) and liquefied natural gas (LNG) operations in Queensland are subject to strict laws to minimise their impacts on the environment.

The Queensland Government has stringent monitoring and compliance regimes in place to make sure companies are meeting their obligations.

As to the line:

‘Can we find out what Independent Australia is. I smell green’,

Paul Lynch may smell "green" but we smell "complicity" as his comment reveals a derisory attitude toward any media investigating issues of public safety and water contamination by CSG mining. Lachlan Barker did receive an "official" response from Paul Lynch sometime later advising that:

'Investigations into the nature and cause of gas seeps appearing in the Condamine River are ongoing in line with the recommendations of an independent scientific panel.

It is expected that determining the source or cause of the gas seeps will require a long-term investigative approach to find science-based answers to the phenomenon.

The Queensland Government will continue to keep landholders fully informed about the progress of the investigations and findings.' 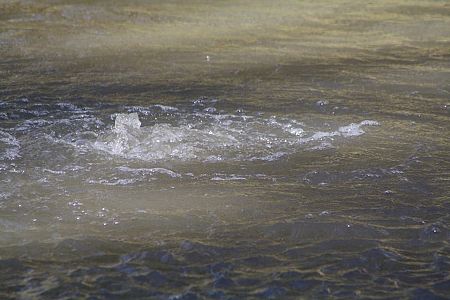 Greens spokesperson for CSG in Queensland, federal senator Larissa Waters’ response to the above email was:

‘The methane bubbling from the Condamine river is a stark reminder of the damage that coal seam gas industry is doing.'

Senator Waters was scathing about the lack of action on this leak, which has been going on for three years.

‘Neither the coal seam gas industry, nor the Labor and Liberal Governments have taken responsibility for this uncontrolled leak. Without understanding or admitting the cause of these gas leaks, how can the Government and CSG industry possibly avoid more leaks happing in future? The admission that the Government may never determine the cause of these leaks confirms what we’ve suspected for years: fracking is an out-of-control experiment on our groundwater and environment.

This ‘go-slow’ exposes the Government’s approach of covering-up and ignoring crucial problems in the CSG industry, while they allow unfettered expansion coal seam gas across the state. This Government department appears to have a culture of trivialising environmental concerns.’

Senator Waters recently introduced a bill into the Senate calling for a ban on fracking.

Isn't it time to end the culture of the "revolving door"?

The revolving door culture of self-interest between the mining industry and governments of all stripes, especially in NSW and Queensland, has seen a steady lineup of politicians in key policy positions take up lucrative job offers in return for “Mickey Mouse” protocols on CSG. An investigation by Sandi Keane into this corrupt practice in NSW was reported in IA in February 2013.

But the mining industry’s insidious practice of securing favoured policy outcomes via plumb job bribes to politicians has now moved on to a new phase — targeting top bureaucrats with regulatory oversight of the industry. Whistleblower Simone Marsh has gobsmacked even the most cynical with her list of over thirty examples of bureaucrats who have jumped ship after being offered a lucrative job with or on behalf of the mining industry. See the transcript of the special ABC Four Corners interview.

Marsh was a former analyst with the Queensland Co-ordinator General, whose role included authoring a report on the environmental effects of the proposed LNG industry. Following the filing of the report in June 2010, she walked out of her job and was not heard of again in the media until she testified at the Queensland government parliamentary inquiry into Queensland government administration of Commonwealth government affairs in November last year. See Simone Marsh's submission here (#39).

Marsh’s list – as supplied to Independent Australia by Simone and documented by Michael West in his Sydney Morning Herald investigation on 28 March 2015 – includes James Purtill, former Director-General of the Queensland Environmental Protection Agency who, with an eye to the main chance, took up a post with Santos GLNG (during the approval phase).

It also includes bureaucratic bigwigs who had controls of the industry oversight levers like Geoff Dickie, Shane McDowall and Phil Dash, who moved out of the Coordinator-General's department directly into industry. Dickie was appointed head of the Queensland Exploration Council and works for the Flinders Group. Shane McDowall was the Deputy Coordinator-General at the time. According to information provided to IA by Simone Marsh, within two weeks of signing off the QGC project, McDowall became Managing Director of John Cotter's land access and approvals consultancy, Flinders Group. QGC was a major client of Flinders Group. Phil Dash also joined the Flinders Group.

Stirling Hinchliffe MP, who was the Minister responsible for the Coordinator-General's office at the time of the 2010 approvals, opened Flinders Group's new expanded office in 2011. Was his "11th hour" Ministerial decision in 2012 re land access due to a call/email from the Flinders Group (on behalf of QGC). See story here.

Hinchliffe was part of the LNG cabinet sub-committee, referred to as the 'LNG committee' in Ian Fletcher's email to the Queensland Treasurer (12 May 2010). Fletcher was Director-General, Department of Employment, Economic Development and Innovation. His email was key evidence of a crime. It can be found in Appendix C of Simon Marsh's submission. The email provides evidence that the 'LNG Committee" may have acted as a 'Court of Star Chamber' (Ian Fletcher's own words) and facilitated 'constitutional innovation' in the approval of CSG-LNG projects in Queensland.

It is likely that Stirling Hinchliffe, John Cotter and Shane McDowall had all known each other for years, from their property and major infrastructure project backgrounds. See here and here.

Another is Alan Feely, head of National Parks and Wildlife Service who went to Santos.

On the subject of Santos, it will be interesting to see how the Queensland police deal with anti-CSG protesters after accepting sponsorship from the mining giant which blatantly features the Santos logo on police cars. 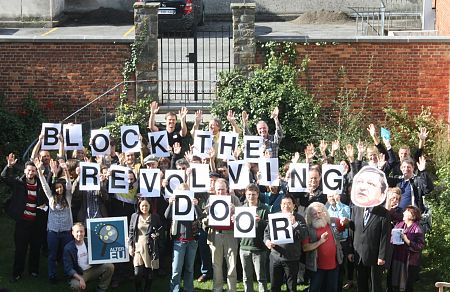 Senator Waters has called on the new Labor government to explain how they are addressing the toxic self-interest culture of the "revolving door" and "regulatory capture".

'The people of Queensland demand that our environment is treated with respect, and Labor must explain how they’re addressing this toxic culture.It’s long past time when land, water and people’s health should be prioritised over the private profits of the gas multinationals.’

Is it any wonder Australians have major concerns about the insane experiment of coal seam gas being played out on an unwitting public when the mining industry, the bureaucracy, the lobbyists and the government are all part of the same corrupt culture which lets mutual self-interest trump public concerns?

Deputy editor, Sandi Keane, sent Paul Lynch, Media Manager DNRM, an extract from the above story and asked for a comment. His email dated 8 April 2015 follows:

As a journalist of 38 years experience, I would consider the use of email material inadvertently sent and clearly not intended for your use to be both unfortunate and less than professional.

At the time I sent that email I was unaware who or what Independent Australia was. There was no intention to delay a response. It was a matter of determining from the Queensland Government’s Coal Seam Gas Compliance Unit whether there had been any update from the ongoing investigations into the nature and cause of gas seeps appearing in the Condamine River.

We provided your reporter with a response to his enquiry the very next day as follows:

“Investigations into the nature and cause of gas seeps appearing in the Condamine River are ongoing in line with the recommendations of an independent scientific panel.

It is expected that determining the source or cause of the gas seeps will require a long-term investigative approach to find science-based answers to the phenomenon.

The Queensland Government will continue to keep landholders fully informed about the progress of the investigations and findings.”

IA readers can decide whether it was in the public interest for her to publish the email sent to IA's Lachlan Barker and certainly not marked "confidential". 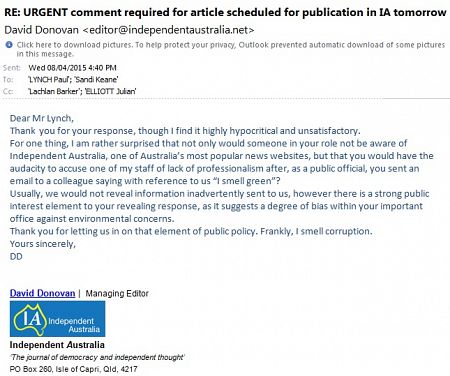