This disturbing article about a virtually forgotten, yet ongoing, tragedy by renowned anti-nuclear campaigner Dr Helen Caldicott was read all around the world, gathering over 56,000 unique views.

Dr Helen Caldicott, explains recent robot photos taken of Fukushima's Daiichi nuclear reactors: radiation levels have not peaked, but have continued to spill toxic waste into the Pacific Ocean — but it's only now the damage has been photographed.

RECENT reporting of a huge radiation measurement at Unit 2 in the Fukushima Daichi reactor complex does not signify that there is a peak in radiation in the reactor building.

All that it indicates is that, for the first time, the Japanese have been able to measure the intense radiation given off by the molten fuel, as each previous attempt has led to failure because the radiation is so intense the robotic parts were functionally destroyed.

The radiation measurement was 530 sieverts, or 53,000 rems (Roentgen Equivalent for Man). The dose at which half an exposed population would die is 250 to 500 rems, so this is a massive measurement. It is quite likely had the robot been able to penetrate deeper into the inner cavern containing the molten corium, the measurement would have been much greater.

These facts illustrate why it will be almost impossible to “decommission” units 1, 2 and 3 as no human could ever be exposed to such extreme radiation. This fact means that Fukushima Daichi will remain a diabolical blot upon Japan and the world for the rest of time, sitting as it does on active earthquake zones. 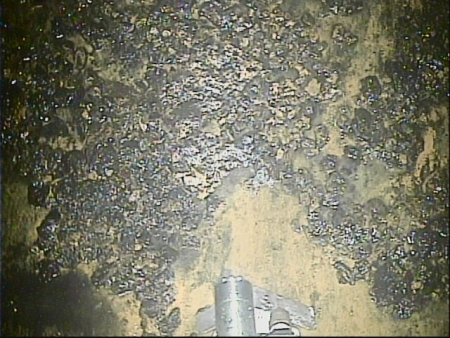 What the photos taken by the robot did reveal was that some of the structural supports of Unit 2 have been damaged. It is also true that all four buildings were structurally damaged by the original earthquake some five years ago and by the subsequent hydrogen explosions so, should there be an earthquake greater than seven on the Richter scale, it is very possible that one or more of these structures could collapse, leading to a massive release of radiation as the building fell on the molten core beneath. But units 1, 2 and 3 also contain cooling pools with very radioactive fuel rods — numbering 392 in Unit 1, 615 in Unit 2, and 566 in Unit 3; if an earthquake were to breach a pool, the gamma rays would be so intense that the site would have to be permanently evacuated. The fuel from Unit 4 and its cooling pool has been removed.

But there is more to fear.

The reactor complex was built adjacent to a mountain range and millions of gallons of water emanate from the mountains daily beneath the reactor complex, causing some of the earth below the reactor buildings to partially liquefy. As the water flows beneath the damaged reactors, it immerses the three molten cores and becomes extremely radioactive as it continues its journey into the adjacent Pacific Ocean.

Six years later, radiation levels at Fukushima are so high not even a robot can survive inside https://t.co/gWuugk2Xqx pic.twitter.com/A7ZB91olvU

Every day since the accident began, 300 to 400 tons of water has poured into the Pacific where numerous isotopes – including cesium 137, 134, strontium 90, tritium, plutonium, americium and up to 100 more – enter the ocean and bio-concentrate by orders of magnitude at each step of the food chain — algae, crustaceans, little fish, big fish then us.

Fish swim thousands of miles and tuna, salmon and other species found on the American west coast now contain some of these radioactive elements, which are tasteless, odourless and invisible. Entering the human body by ingestion they concentrate in various organs, irradiating adjacent cells for many years. The cancer cycle is initiated by a single mutation in a single regulatory gene in a single cell and the incubation time for cancer is any time from 2 to 90 years. And no cancer defines its origin.

We could be catching radioactive fish in Australia or the fish that are imported could contain radioactive isotopes, but unless they are consistently tested we will never know.

As well as the mountain water reaching the Pacific Ocean, since the accident, TEPCO has daily pumped over 300 tons of sea water into the damaged reactors to keep them cool. It becomes intensely radioactive and is pumped out again and stored in over 1,200 huge storage tanks scattered over the Daichi site. These tanks could not withstand a large earthquake and could rupture releasing their contents into the ocean.

But even if that does not happen, TEPCO is rapidly running out of storage space and is trying to convince the local fishermen that it would be okay to empty the tanks into the sea. The Bremsstrahlung radiation like x-rays given off by these tanks is quite high – measuring 10 milirems – presenting a danger to the workers. There are over 4,000 workers on site each day, many recruited by the Yakuza (the Japanese Mafia) and include men who are homeless, drug addicts and those who are mentally unstable.

There’s another problem. Because the molten cores are continuously generating hydrogen, which is explosive, TEPCO has been pumping nitrogen into the reactors to dilute the hydrogen dangers.

Vast areas of Japan are now contaminated, including some areas of Tokyo, which are so radioactive that roadside soil measuring 7,000 becquerels (bc) per kilo would qualify to be buried in a radioactive waste facility in the U.S..

As previously explained, these radioactive elements concentrate in the food chain. The Fukushima Prefecture has always been a food bowl for Japan and, although much of the rice, vegetables and fruit now grown here is radioactive, there is a big push to sell this food both in the Japanese market and overseas. Taiwan has banned the sale of Japanese food, but Australia and the U.S. have not.

Prime Minister Abe recently passed a law that any reporter who told the truth about the situation could be gaoled for ten years. In addition, doctors who tell their patients their disease could be radiation related will not be paid, so there is an immense cover-up in Japan as well as the global media.

The Prefectural Oversite Committee for Fukushima Health is only looking at thyroid cancer among the population and by June 2016, 172 people who were under the age of 18 at the time of the accident have developed, or have suspected, thyroid cancer; the normal incidence in this population is 1 to 2 per million.

However, other cancers and leukemia that are caused by radiation are not being routinely documented, nor are congenital malformations, which were, and are, still rife among the exposed Chernobyl population.

Bottom line, these reactors will never be cleaned up nor decommissioned because such a task is not humanly possible. Hence, they will continue to pour water into the Pacific for the rest of time and threaten Japan and the northern hemisphere with massive releases of radiation should there be another large earthquake.