In April last year, Michelle Pini interviewed Dr Helen Caldicott on the Fukushima disaster. As IA was the first to report the nuclear melt down in Australia with some dozen updates as the full disaster unfolded, we think you'll find this story highly relevant.

"In Australia, we don’t have nuclear power, we just export our radiation for the joy and benefit of the rest of the world - it’s immoral." ~ Dr Helen Caldicott

DR HELEN CALDICOTT is hard to ignore. Her breadth of knowledge and fervour for her subject seem limitless. She gesticulates often, her gaze is direct, and there is a practical sense of urgency in her voice.

An Australian physician and world-renowned anti-nuclear activist and educator, she makes time to be interviewed despite having just returned from a speaking tour of Japan and Denmark. If Caldicott is jetlagged, she shows no sign.

“Fukushima is bigger and much worse than Chernobyl yet we are buying Japanese food imports, we are eating fish that are likely contaminated and there is no telling whether the atmospheric radiation cloud which hovered over Japan initially, will not end up here.”

As a 16 year old, Caldicott read On the Beach, a novel set in Melbourne about a nuclear war resulting in the obliteration of life on earth.

“I kind of lost my innocence after that book and never felt safe again.”

Caldicott then went on to study medicine and learned about the effects of radiation, mutations and cancers. She describes the events that have fuelled her obsession for so long. (Caldicott has campaigned against uranium mining and nuclear power for 43 years.)

“At the same time, Russia and America were testing bombs like there was no tomorrow — it was insanity. We don’t know where things are being grown, and because we can’t taste, smell or see radiation, nobody should be eating Miso soup or rice or anything else imported from Japan. Migratory birds, as well as fish spread radiation —perhaps to Australia. But our food and fish are not being tested.”

She explains that since fish, such as tuna, swim thousands of miles against currents, we should be concerned about radioactive bio-concentration by the time it reaches humans, who are at the apex of the food chain.

Caldicott also suggests imported, second-hand Japanese cars may have contaminated air filters from the time of the accident.

“initiated a food monitoring program which tested all food types imported from Japan for radioactive isotopes … Over 1000 food samples were tested … and none were found to exceed the international guideline levels.”

Solomon also advises that an ARPANSA research project analyzed seafood samples obtained from fisheries in Queensland, the Northern Territory and Western Australia but did not detect any effect from the Dai-ichi NPP accident.

“ARPANSA will repeat this study in 2016, the period in which the levels of radioactive cesium in Australian waters from the accident in Japan are predicted to peak.” 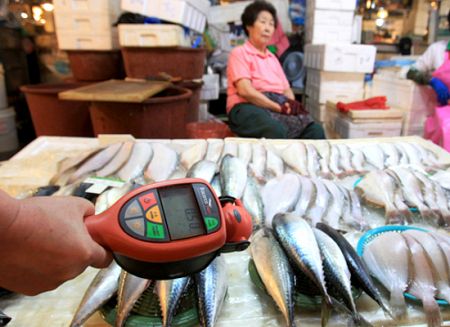 In addition, new and used motor vehicles imported from Japan were randomly screened but, advises Solomon,

“None of the vehicles were found to have contamination. Radioactive materials … were detected briefly at very low levels in atmospheric samples in Darwin.”

But, according to Solomon, these atmospheric releases have ceased.

Dr Caldicott does not accept these assurances as adequate. She says:

“Some say the doses are too low but you only need one hit on a regulatory gene in a single cell to get cancer — it’s a random game of Russian roulette.”

On the subject of Australia’s culpability, Caldicott is adamant:

“Let’s not forget that the uranium at Fukushima was our uranium — we have no right to ignore the situation. We have a moral obligation to take responsibility for this accident.”

“In Australia, we don’t have nuclear power, we just export our radiation for the joy and benefit of the rest of the world — it’s immoral.”

The Australian Conservation Foundation has echoed this view, pointing out Fukushima’s ill-fated reactors were powered by our uranium:

The crisis has profound implications for Australia because the Fukushima disaster started here, in the back of a big yellow truck. … Rocks dug up in northern South Australia and in Kakadu are the source of the radioactive fallout that has spread in the wind across Japan and beyond and the massive volumes of polluted water that continue to be dumped into the Pacific. (Sweeney, D, Fukushima: three years on and still no action, 2014.) 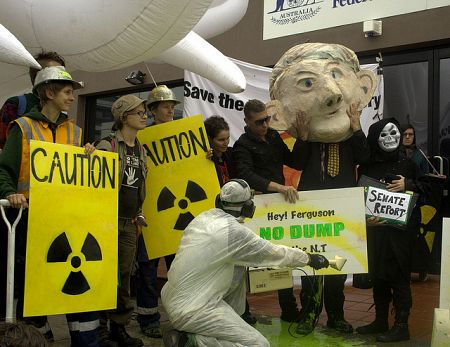 Daniel Zavattiero is Executive Director Uranium at the Australian Uranium Association, the advocacy body for the industry. Pointing to a photo of storage casks containing waste collected from a nuclear power plant in the USA, he says with conviction:

"I love that photo. That’s 28 years of waste in those few impenetrable containers. It’s beautiful. You could run over those with a semi-trailer — they’re virtually indestructible. Isn’t it great?”

As the excitement in his voice bubbles over, it’s hard to believe he is discussing radioactive isotopes. Zavattiero’s view is that Australia should remove the current ban on nuclear development to “allow the technology to compete on its merits”.

He adeptly steers the discussion back to what he sees as the advantages of nuclear energy and repeats phrases such as “zero emissions”, “readily available” and “driving growth and economic prosperity around the world”.

While Zavattiero agrees the nuclear debate in Australia has been adversely impacted by Fukushima (and Chernobyl before it), this is the only area where he considers there are ramifications for Australia.

He shows me an excerpt he has selected from UNSCEAR’s report on the effects of the Fukushima disaster. It states:

‘No radiation-related deaths or acute diseases have been observed among the workers and general public exposed to radiation from the accident.’

“Not diminishing the impact on the Japanese; we fret about this and it’s emotional. But the problems at Fukushima were caused by a tsunami which led to a loss of power to the reactors — they were not caused by the reactors.”

Zavattiero has anticipated most of the questions on this issue and answers many with his own:

On the question of exporting uranium, he is comfortable:

“We only sell to countries that use it for peaceful purposes — this is a mandatory condition,” he says. And adds, “There’s radiation everywhere. All technologies have pros and cons and the unique aspects of the nuclear industry are manageable.”

With regard to spent fuel, Zavattiero says:

“It’s not that much of a worry. And Australia has the chance to be front and centre of meeting that challenge.”

After our meeting, I re-read the UNSCEAR report. It also mentions,

‘An increased risk of thyroid cancer in particular can be inferred for infants and children.’ (UNSCEAR, Report of the United Nations Scientific Committee on the Effects of Atomic Radiation, 2013.)

On this, Caldicott is furious:

“The misinformation about this is endless. Radiation is an invisible killer — that’s the ace up the nuclear industry’s sleeve. You don’t get cancer immediately, it takes years … and it doesn’t bear a sign denoting where it came from.”

“The latent period for leukemia is five to 10 years and solid cancers, 15 to 80 years.”

Thus, she says, it is premature and “misleading” to conclude that there are no radiation-related deaths from the Fukushima accident.

Dr Peter Karamoskos is a nuclear radiologist and the public representative on ARPANSA’s radiation health committee. He is softly spoken, calm and articulate.

Karamoskos likens the committee to a board of directors who come together to discuss the latest science as it relates to regulatory standards. He explains:

“My role as public advocate was expressly created in the ARPANS Act. I am able to speak freely and my views do not need to reflect ARPANSA’s position.”

He confirms that Fukushima is “highly contaminated”, affecting flora, fauna, soil and sediment in the ocean and will be so for “tens of generations”.  Karamoskos says:

“You have to have evacuated of course, and even if it stopped tomorrow, the area will still be contaminated for 200 years.”

He has visited Fukushima post-disaster and is clearly deeply moved:

“Even if you can clear a small area for people to live, contaminated areas surround them. They’ve lived there for generations and they’ve lost their identity. They’re living in emergency accommodation — communities will never be reconstituted.”

He says the local prefectures see themselves as victims and don’t trust the government.

“Levels of contamination are front of centre for Japanese people; they think ‘dose’ every moment of the day.”

“Radioactive material is still being released into the ocean at Fukushima and there is no way of stopping it that I’m aware of.”

However, he believes the maritime discharge as it affects open waters “should not be overstated”, as seawater dilutes the isotopes so that only trace elements are found further afield. He says

“There would be some bleeds across the equator but not to any significant extent.” 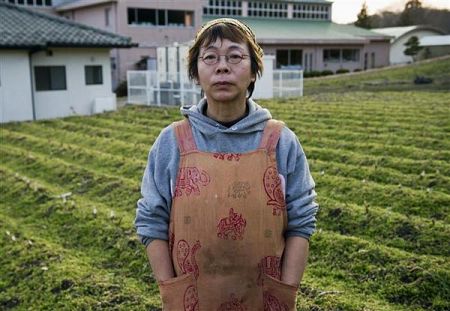 Organic farmer, Tatsuko Ogawara, is 40 km from Fukushima. She's unsure if she can continue as the soil may be contaminated.

ARPANSA’s public advocate recognizes the catastrophic effect of the Dai-ichi disaster, but says it does not pose a direct risk to Australians. He does concede, however, that since “monitoring is local and only as good as the body that’s doing the testing”, it is impossible to be absolutely confident that foods aren’t slipping through the net.

Karamoskos also acknowledges that labeling of imported foods, especially via other countries with less stringent regulations, is a legitimate concern and cannot be guaranteed to be accurate or safe.

Caldicott points to conflicts of interest throughout the entire process of regulatory accountability.

“The Japanese government is in overdrive trying to contain this situation and they can’t stop it. Even the Japanese people don’t believe [their] government.”

On the issue of uranium mining and Australia’s moral obligations with regard to its export, Karamoskos echoes Caldicott’s views:

“Exporting uranium is fraught because we can’t ensure it won’t be used for weapons. Is China or India going to let us inspect their reactors? And then there’s the issue of radioactive waste disposal — storage is not a solution.

Fukushima is an example of how poor regulation and cosy industry relationships, in a technologically advanced country, can result in things going awry within a day.”

Caldicott is committed in her quest to educate Australians (and the world) about Fukushima and its implications:

“This topic has been almost totally ignored by the media in Australia but it needs to be publicized. We are talking about an issue that has had profound ramifications globally.”

And she believes that the Fukushima disaster is not over:

“It’s an atomic time-bomb with a number of buildings still vulnerable to collapse if there’s another earthquake. And they’re building a large cancer hospital in Fukushima — that tells you everything.”

But Dr Helen Caldicott is optimistic about the future:

“The first step to great change is great awareness. Jefferson said, ‘An informed democracy will behave in a responsible fashion’ — we have to bomb them with information.”

Revelations about the aftermath of the Fukushima disaster continue to mount in favour of Dr Caldicott’s predictions. This morning’s news from Global Research reveals that Fukushima University’s Michio Ayoama has advised Kyodo that the West Coast of North America will be hit with as much as 80 per cent of the cesium deposits already experienced in Japan by 2016.

Want to read more on nuclear issues? Subscribe to IA for just $5.