The protests continue in the southern countries of Europe and if nothing changes they will continue for a long time, writes Iurgi Urrutia. 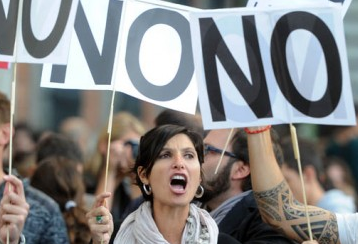 EVERY NOW AND THEN, there comes a time when people have had enough. History demonstrates that when social injustice reaches a high level, social unrest is transformed into a revolt, which advances freedom. The history of human struggle is a trend of gradual betterment and increased rights and freedoms.

In Europe, the Troika (Germany, the European Central Bank and the International Monetary Fund), have attempted to fix the economic issues faced by the southern European countries (and Ireland) through radical austerity measures that aim to save the banks and cut government spending. In Greece, this has resulted in increased unemployment, poverty and suicides (they were at the bottom in terms of suicide rate, now they're right at the top). But it is not the human cost that they're interested in.

The same measures imposed to Greece are now being imposed on other countries. Let's look at some data from Spain.

Spain is currently the second most expensive country to study in Europe. Thousands and thousands of students have not been able to start or continue their university studies due to increased fees. Politicians always speak of the importance of education, but one of the first victims of the austerity measures and one of the worst affected was education funding. And when the students hit the streets in Spring, they were brutally assaulted by police.

Not content with fee increases, the government has also sacked thousands of teachers from public schools, class sizes have increased drastically and teacher salaries have been frozen for the last three to four years. Considering the increases in taxes and the cost of living, the salary received in the public sector (not just teachers, but anyone in the public sector) has been drastically reduced and working conditions have worsened severely. A couple of facts will suffice, small businesses, under heavy stress since 2008 are slowly disappearing and in 2012, every day, eight autonomos (independent workers or sole traders) stop trading.

The response by the government to all this is to further add insult to injury. The Minister for Employment and Social Security, Fatima Bañez, this year implemented a labour reform to make it easier for businesses to sack workers (in Australia we know what WorkChoices was, so we can imagine what this is). Spain now has the highest unemployment rate since Franco's dictatorship. Ironically, Fatima Bañez – the minister who has passed the most aggressive workplace relations reform in the history of Spain – has never worked in her life apart from serving her political party.

Spain is another country where, like in Australia, people are keen to buy a home. Whereas in other European countries home rental is often the norm, Spanish people favour home ownership. In the last twenty years, home prices have ballooned to extraordinary levels, making home ownership incredibly difficult and burdensome, if not impossible. Whilst builders amassed large wealth, most people had to live with their parents until their mid-thirties. Now, that the housing bubble burst, Spain has millions of homes scattered across the country that have never been bought, never been lived in and are rotting away in oblivion. Someone made a lot of money building ghost cities, whilst keeping the prices out of reach.

Since the crisis hit, the country thousands and thousands of people have defaulted and lost their homes. It was reported in June, that every day 159 houses are cleaned out and the people kicked out to the street for defaulting on their home loan or being unable to keep up with the home rental fees. It was estimated that 82 per cent of the families affected have children and have no other home to go to.

That is bad enough, but it's even worse. In the case of people defaulting on a home loan with a bank, after being kicked out of their house by the banks with the support of the police – who do the dirty work for the banks – the now homeless Spanish citizens have to still keep paying the loan to the banks. In other words, Spain is the only country where, after you default on your home loan and the bank takes ownership, you still have to keep paying.

The Government and the Troika say that the austerity measures are necessary. They must cut Government spending in order to pay the debt. However, Spain was posting surpluses before 2008 and was the leading European country in job creation. The Spanish debt was not public, but private. It was through the government's actions that the private debt of the financial institutions was turned into a public one. They decided they could not let the banks fall ― so they saved them and put the burden onto the shoulders of the whole country.

They didn't want to look at Iceland, which refused to bail the banks out. They didn't listen to Stiglitz and Krugman ― the aforementioned Nobel prize winner for economics, who described the austerity measures targeting the government and citizens as "suicide". Instead, there was a financial amnesty and banks were bailed out.

The Governments and the Troika impose austerity measures, but who suffers? The banks created the whole crisis and they were bailed out. No person was charged or convicted for any crime or misdemeanour. They bore no responsibility; no burden. Once again, it has been the citizens who suffer ― especially the most vulnerable. Salaries have been reduced, employment conditions worsened and taxes are increased across the board.

The Government has accused protesters of acting to erode and destroy democracy. The Secretary General of the ruling Popular Party, María Dolores de Cospedal, prior to the demonstrations, compared the actions of the peaceful 25S protesters with the 23F military coup d'etat. The Spanish government delegate, Cristina Cifuentes, has warned that the police have black lists of people, hinting at a  McCarthyist witch hunt.

The irony is that, whilst they accuse protesters of acting to destroy democracy, MPs in parliament have recently changed the law and amended the Spanish Constitution to criminalise protest. The government has also sold financial sovereignty to the Troika and has done a complete u-turn on every single policy they presented to the last elections. How they can speak of themselves as being the legitimate representatives of the people is beyond anyone's understanding.

Another irony is that, whilst the police arrest protesters for criminal infractions in the course of the protests, the riot police blatantly broke the law that states they must at all times carry visible identification in the course of their work. The law also states that they must give their identification number to any person that asks for it for the purpose of identifying the perpetrator of official misconduct. The head of the main police union tweeted, during the protests, in support of the police officers not carrying identification and encouraging them to beat the protesters hard. Next day, the Spanish government delegate, Cristina Cifuentes declared that the police did not carry identification so they couldn't be sued by protesters. It can’t be said any clearer ― and yet no one will be disciplined; there will be no consequences.

Further irony is that Spanish citizens are suffering under strict austerity measures to pay a debt they did not incur. Last week, the Government presented next year's budget, in which they introduced further cuts. The Treasurer, Cristobal Ricardo Montoro, has admitted that the bailout to the banks has increased public debt. In fact, in next year's budget, one quarter of the budget goes solely into paying the interest on the debt. Let's not forget that, as mentioned before, the Spanish Government kept posting surpluses until the housing bubble burst and the crisis began in 2008.

Citizens have hit the streets because their living conditions are worsening every second and they see the adverse effects the austerity measures have had in Greece. They demand that those who caused the crisis pay for it; that private debt is not turned public, that basic social and human rights are not taken away (health, education, housing). 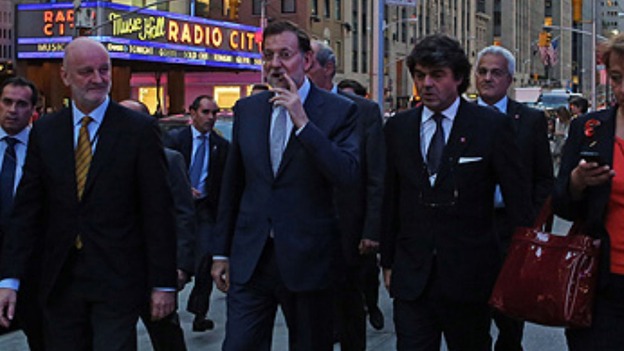 Whilst they demand more democracy, the Spanish president Mariano Rajoy walks down the Sixth Avenue in New York insultingly smoking a big fat cigar and uses his speech at the United Nations to tell world leaders that Gibraltar is Spanish not British. Is that really important when your country is crumbling under your policies?

The Troika and the Spanish government have lost. Too many citizens are affected and under severe stress. They've had enough and they will not stop until there's real, meaningful, change. Let's hope that the Spanish Revolution continues and as in past times in history the result is more democracy, more freedom and more rights.