Some commentators drew parallels between the deep deficits and soaring debt the Coalition embraced in last week’s Budget and Labor’s past policies. Alan Austin shows why they are vastly different.

ANYONE THINKING THE Morrison Government has now adopted Labor’s approach to debt is wrong.

Yes, the Coalition now embraces huge budget deficits and extensive borrowing for years to come — after condemning Labor relentlessly over the last decade for modest deficits and debt.

It may suit the Coalition to have voters believe it is now following Labor’s highly successful program of ten years ago. It isn’t.

The broad difference is that Labor and the Greens borrowed in order to stabilise the economy by building the national estate. The Coalition is borrowing primarily to replace capital lost by foreign corporations through mineral wealth exported with inadequate royalties, company taxes not collected and extensive hand-outs to media companies and others.

Annual infrastructure spending was above $1,600 per person under Labor. That was when gross debt added per person per year averaged just $1,764, which was a fairly close correlation.

In stark contrast, Coalition infrastructure spending now averages below $1,350 per person per year. Yet, gross debt added annually has averaged $3,174 per person.

Clearly, virtually all of Labor’s borrowings built the nation’s assets. But only a fraction of Coalition borrowings are staying in Australia to benefit its citizens.

During the Global Financial Crisis (GFC), Australia’s prompt stimulus ensured fewer jobs were lost than in most other countries.

Today, almost two million Australians are underemployed or have no job at all. The latest unemployment rate of 5.62% ranks a lowly 14th in the OECD, down from sixth when Labor and the Greens were in office.

Through the critical two years, 2009 and 2010, while gross debt deepened by $117 billion, Australia’s net worth declined by $64 billion. So not all of that $117 billion in debt liability was wiped off the nation’s balance sheet. More than half was added to the assets side of the ledger.

Fast forward to today: over the last two years, gross debt deepened by $283.1 billion. Over that period, Australia’s net worth collapsed from minus $450.6 billion to minus $746 billion, an overall decline of $295.4 billion. Thus, all the borrowings were wiped off the books. No offsetting assets were added.

Net worth is the measure of federal government assets minus liabilities. Assets include investments, land, buildings, equipment, infrastructure and cultural assets. Liabilities include government borrowings, debts to suppliers, superannuation and other employee charges.

The small debt Labor added through the GFC was applied extremely well. By December 2011, Australia’s median wealth was the world’s highest; the Australian dollar was worth more than one U.S. dollar; the jobless rate was 5.2%; job participation was a near-perfect 65.1%; wages were growing at 3.6%; economic freedom was the highest in the OECD, annual growth in gross domestic product (GDP) at 3.44% ranked seventh in the OECD; gross debt was the OECD’s fifth-lowest; and Australia had just gained triple-A credit ratings with all three agencies for the first time.

Australia’s economy performed the best by some margin. The next-ranked countries – Switzerland, Luxembourg and Norway – were a long way back. 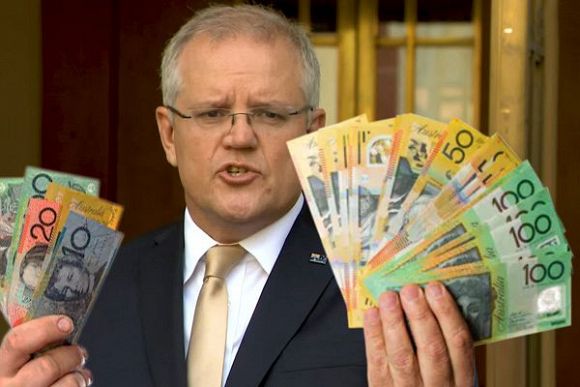 As record debt under the Morrison Government spirals to new heights, perhaps the Coalition will become synonymous with debt disasters.

But it didn’t (except in a narrow, technical sense). Australia has had negative annual GDP growth for the last three quarters. These were minus 6.31% in June 2020, minus 3.70% in September and minus 1.12% in December. We await the March 2021 result.

Australia was the only OECD member to avert recession and widespread job losses in 2008-10. In contrast, many countries are now faring much better than Australia on GDP growth, including South Korea, New Zealand, Ireland, Luxembourg, Lithuania, Turkey and Israel.

The main difference, of course, between Labor and Coalition debt is that the former is used to ensure a reformist government never gains office again. Coalition MPs and the mendacious pro-Tory media continually depict Labor’s debt levels as a 'debt timebomb', 'terrible' and 'a disaster'.

Debt stacked on by the Coalition, which is forecast soon to reach six times larger than Labor’s, is greeted with characterisations such as this:

'As the Coalition proves, good government adapts to challenges.'

'War-like debt here for generations, but it is sustainable.'

If we have to have deficit budgets as far as the eye can see maybe it would be best for voters to let ⁦@AlboMP⁩/Labor actually run ‘em. That way we’d get a National anti-corruption Commission, more affordable housing, higher wages, + an indigenous voice to parliament. pic.twitter.com/qZzmFF2zxb