LAST FRIDAY (12 June) Australia’s gross debt clicked over $673.4 billion. While this doesn’t look significant at first glance, it is $400 billion higher than when the Coalition won office in September 2013.

Readers who remember that election campaign will recall one of the principal issues – in fact, the main economic issue – centred on Labor’s “skyrocketing debt”. The Coalition won that election largely on the promise to substantially reduce that debt.

The $400 billion milestone matters for several reasons, although maybe not the ones you think.

First, it adds significantly to the overwhelming evidence that Australia’s economy under the Coalition has been the most notable failure in the developed world. 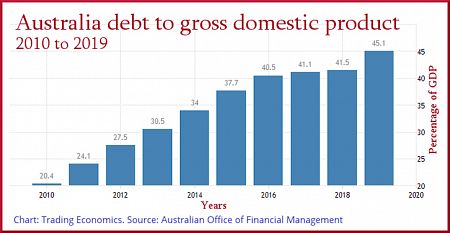 Between 2012 – the last full year Labor managed the economy – and 2019 Australia’s gross debt has ballooned from 27.5% of gross domestic product (GDP) to 45.1%. That is an expansion of 17.6% of GDP. This is the greatest debt blow-out of all 36 wealthy, developed members of the Organisation for Economic Cooperation and Development (OECD). 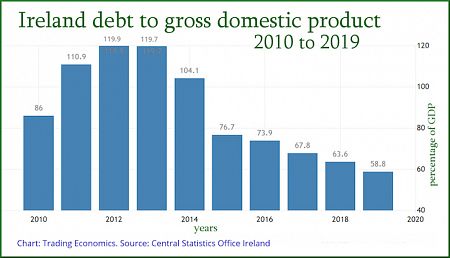 A majority of OECD members has reduced debt through the global boom. The last five or six years have been the best since World War II for well-managed economies to generate surplus budgets and repay the borrowings needed during the Global Financial Crisis (GFC). 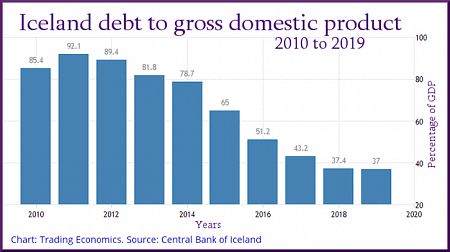 At the other end of the spectrum, just three nations have increased borrowings more than 15% from 2012 to 2019. They are Chile, Greece and Australia. Of these, Australia’s debt expansion has been the greatest. 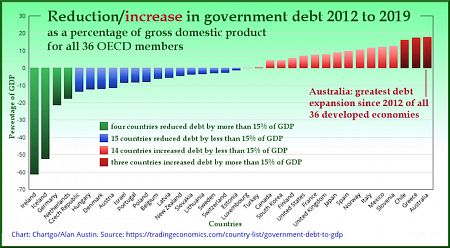 Interest to be paid on gross borrowings this financial year – which ends in two weeks – is on track to be about $20 billion. That is actual cash the Government must find to pay the lenders and thus not available for pressing needs elsewhere.

The school of thought known as modern monetary theory (MMT) claims deficits and debt pose no problem to governments with sovereign currencies, such as Australia, the USA and Japan. While this is true in theory and seems to operate in practice in Japan and Singapore, it does not apply everywhere. Budgets framed by both sides of politics in Australia have expenditure constrained by revenue. This was actually legislated until recently when the debt ceiling was abolished, but it still applies.

Hence that $20 billion paid in interest on the unnecessary debt is money not available for other urgently-needed services.

The current Government applies several strategies to shunt wealth and income offshore to the foreign supporters of the Coalition parties. Allowing widespread tax avoidance is one. Interest on the debt is another.

Of the $673 billion in Australian Government securities on issue – which is the quantum of the gross debt – about 60% is held by foreign investors. Hence about 60% of the $20 billion interest bill goes to foreign interests. That is close to $12 billion a year or – to apply the trick the Coalition played to embarrass the previous Labor Government – that’s $33 million per day. Every day.

With the Aussie dollar down the S-bend, exchanging them for other currencies is often not viable. But buying up Australian agricultural properties is extremely attractive. This is one reason so much land is passing from Australian to foreign ownership. (This column will address this issue as soon as the Government releases the report on foreign ownership of agricultural land to 30 June 2019. This report is now six months overdue.)

The topic of government debt, according to Australia’s mainstream media, exists in order to attack Labor and ensure the Coalition gains and retains office. Hence gross debt of 27.5% of GDP under Labor was “massive and growing debt” and “Labor’s debt timebomb”. Even during the worst global recession since the Great Depression. And even when it was close to the lowest level in the developed world.

But when the Coalition is in office, there is no problem at all with debt reaching 30% of GDP, or 35, or 40, or 45 — during a global boom in investment, profits and government revenue. Not worth even mentioning.

Milestones the Australian media have ignored which they would have screamed hysterically about under Labor include:

Had the media amplified and exaggerated these facts and repeated them endlessly during the 2016 and 2019 elections in the same way they treated the puny debt in 2013, the Coalition would not have won those elections.

Then where would Australia’s economy be? Probably still at the top of the OECD tables, instead of down near the bottom.

Alan Austin’s defamation matter is nearly over. You can read an update here and help out by contributing to the crowd-funding campaign HERE. Alan Austin is an Independent Australia columnist and freelance journalist. You can follow him on Twitter @AlanAustin001.

Australia under the Coalition: Economic management at an all-time low https://t.co/7da9w3qBGu @IndependentAus

11 October 2021, 7:00am A malicious media campaign against an effective state leader is currently underway ...

4 October 2021, 7:00am Tawdry attempts by federal Coalition ministers to vilify Victoria’s Premier have ...

27 September 2021, 8:00am The Morrison years have been appalling for Australian workers. Alan Austin reveals ...
Join the conversation
comments powered by Disqus
News updates