The Morrison Coalition Government has now doubled all debt stacked on by all governments in Australia’s history. Alan Austin updates both the budget failure and the media hypocrisy.

AUSTRALIA'S GROSS DEBT now exceeds $545 billion. That more than doubles the total debt accumulated between 1854 – when the fledgling colonies first borrowed £135,000 from Mother England – until September 2013, when the current Government took office.

As far as we can tell, only one media outlet reported this milestone.

This sepulchral silence highlights the hypocrisy of most of Australia’s mainstream media. It proves yet again they are committed more to protecting another failed Coalition Government than reporting significant events. 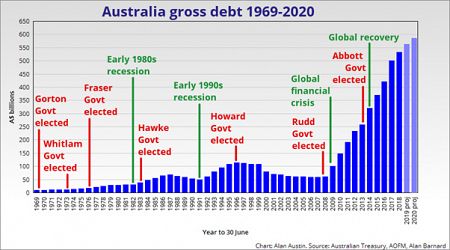 Throughout the Howard years, global money supply enabled Australia’s interest rates to fall below the levels of the Hawke/Keating period. So, the Coalition, together with the newspapers and electronic media, pushed the narrative that “interest rates will always be lower under the Coalition”. This was the dominant theme of the Federal Elections in 2001, 2004 and 2007. It was hammered ceaselessly.

After the 2007 Election, Australia’s interest rates declined further. By early 2009, they were lower under Labor than they had ever been during the Fraser or Howard years. That stymied that tactic. Forever.

Simultaneously, the onset of the global financial crisis (GFC) required governments worldwide to borrow heavily for stimulus spending to maintain economic activity and employment. Australia was the first to announce large-scale investment and, ultimately, delivered the best results.

But the fact that borrowings were now higher than before gave rise to a new malicious mantra — “Labor’s debt and deficit disaster”. This, despite the reality that Australia’s debt remained one of the world’s lowest, reaching just 17.0% of GDP when Labor lost office. It rose above 100% in Japan, the USA, Italy, Singapore, Spain, Belgium and elsewhere.

The Abbott-Turnbull-Morrison-led Australian Liberal-National Coalition doubles all government debt since Federation in just under six years https://t.co/W8awhGjmk6 via @MichaelWestBiz

The Coalition attacks and media feeding frenzy were as ferocious and relentless as they were baseless.

The Daily Telegraph in 2011 was aghast that:

‘Labor has turned the massive budget surplus (amassed by the prudent Howard-Costello government...) into a net government debt of $107 billion.’

As the 2013 Election loomed, the clamour intensified.

‘Gillard Government debt levels are forecast to blow out by 80% to $165 billion in this term alone.’

The Australian described the Gillard Government as a ‘ship of fools’.

Coalition swiftly doubles National debt. $213.1 billion has been added by the Coalition since the 2013 election. See budget surplus is one thing - gross national debt is another #auspol Hockey/Morrison world worse Treasurershttps://t.co/HVqh3q4YAq

ABC News was as enthusiastic as Murdoch’s News Limited. It gave Peter Reith space to assert, ‘Labor's record on economic management has been woeful’. And for Joe Hockey to claim ‘Labor has lost control of the budget’ and ‘The budget is in freefall’.

The fury went on and on, in The Courier-Mail, the ABC’s 730 Report, the Australian Financial Review and elsewhere.

An ABC election report affirmed that ‘The Coalition's main line of attack on the economy is based on the mantra of “debt and deficit”’.

Even after the election, the assaults continued. A December 2013 editorial in The Herald Sun was headed ‘Labor’s debt bomb’.

‘The news is not good. It’s terrible... The massive debt Australia now faces is due, absolutely, to Labor’s financial mismanagement.’

Opposition leaders collaborated with the mendacious media. Then Liberal Party Leader Tony Abbott was scathing, week in, week out:

‘Labor has turned a $20 billion surplus into $167 billion in accumulated deficits... That is $6,000 for every Australian man, woman and child.’

During the 2013 election campaign, Tony Abbott accused Labor of creating a ‘debt and deficit crisis’, but both gross and net debt have risen dramatically under the Coalition. #sydneycriminallawyers #debt #TonyAbbotthttps://t.co/2El5M056y5

The ABC, incidentally, headed its report on this speech:

Nothing to see here, move along

But since the Coalition has come to power, barely a peep has been heard from these bastions of fiscal rectitude.

In March 2014, gross debt clicked over $300 billion, having added $30 billion in just six months. That was the quantum of reduction Abbott had promised to achieve. No news reports.

By April 2017, the Coalition had doubled all the debt Labor stacked on during the GFC. But with no global downturn, no infrastructure to show for it and no excuse whatsoever. Peace and quiet from the media.

Labor added $213.2 billion in five years and nine months, dealing with the worst crisis in 80 years. The Abbott/Turnbull regimes added the same amount in three years and seven months during the strongest boom since World War II.

In September 2017, the psychological $500 billion – half a trillion – was reached with one report in the Fairfax media, but not much else.

And now all debt accumulated by all Australian governments from the colonial days until this hapless Government took office has been doubled. Deafening silence.

Well, not quite total silence. With an election looming, the Murdoch media has decided that debt is not so bad after all.

In a display of rancid hypocrisy, News Limited now assures us that:

‘Government debt is always an issue… but it’s nothing to panic about at these levels.’

No? But we should definitely have panicked when Labor was in office and the debt was one third of current levels.

Finally, remember Tony Abbott apoplectic at Labor’s debt of ‘$6,000 for every Australian man, woman and child.’  What is it now? Try $21,600 per person. Thank you, Tony. Thank you, Malcolm. Thank you, Scott.

Bring on the election.

Morrison can't even manage to stop Spud spending millions on #Paladin, put fuel in ABF boats or manage Aus debt, he's not really one to lecture about fiscal management.#auspol
https://t.co/W2BWmhTKiN via @smh

Wonder why the perception persists that Labor isn't good at the economy?
Because of unfounded statements like this:
'economic management is not a traditional strength of Labor’s'.
GFC anyone? Who doubled the debt, anyone?https://t.co/PYNAOOO0Bp