THINGS MUST BE GRIM at AGL Energy. This year’s tax transparency report released by the Australian Taxation Office (ATO) reveals AGL paid $107 million less in tax in 2018 than back in 2014.

You would deduce from this that business must be tough, profits must be down disastrously and executives and shareholders having a thin time of it. You would be wrong.

Companies which paid no company tax

At least AGL did declare a profit and pay some company tax — even if it was just 1.6 cents in every dollar of its colossal revenue.

A total of 2,214 companies are listed with gross earnings shown. Of these, only 1,649 reveal their taxable income. The others either did not generate any taxable income or have not revealed it. These include some of the world’s biggest exporters of Australia’s resources — Chevron, ExxonMobil, Peabody and Santos.

What a disgracefully corrupt immoral system we live in under the protection of government.
ATO data reveals one third of large companies pay no tax.#auspol https://t.co/T4DVeGOPXa

Of course, there are sound reasons some companies make millions in profits tax-free. Zero tax does not prove malpractice in itself. But when we look at the pattern over the large corporations as a class, the conclusion is inescapable. Avoidance is rife, and getting worse. Here’s how we know.

The Australian Bureau of Statistics (ABS) has confirmed the evidence from export values, commodity prices, dividend yields and the trade surplus that 2017-18 was a bumper year for profits. The year before was pretty good also. If we take the first year of the ATO’s transparency reports as a base, 2013-14, we can see what has happened to overall profits over that journey. See profits chart, below. 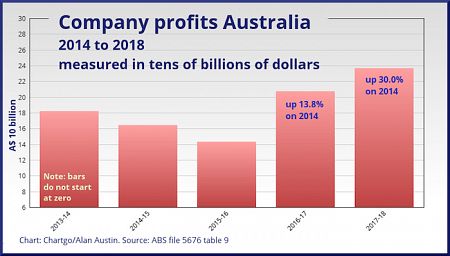 Here is where the ATO’s tax transparency data is invaluable. We can track over five years the amounts individual corporations have reported as gross revenue, taxable profits and tax paid.

A fascinating exercise would be to take all the two billion club companies and see how their tax payments have changed over the last five years. That’s 140 companies. But who has the time? No-one with a life.

Well, Independent Australia has done this, so you don’t have to. The results confirm that the current Federal Government is allowing avoidance on a massive scale. The shifts in the tax these 140 corporations have paid, relative to 2014, are depicted in the chart, below.

Instead of total company tax paid in 2017 increasing by 13% in line with profit increases that year, it actually fell by 1.1%. And in 2018, when the current global boom in commerce, trade and profits arrived in Australia with full force, instead of taxes increasing by 30%, they rose just 8.9%. 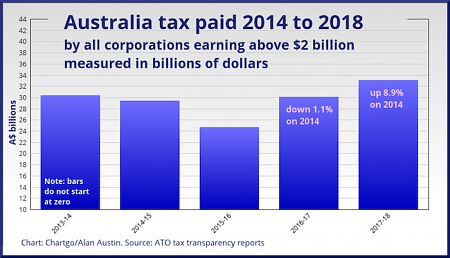 The ATO vigorously asserts its commitment to stopping tax cheats.

‘...delivered on our government commitments, including through our funded taskforces on corporate tax avoidance, the black economy and financial crime.’

With small and medium businesses, this is so. Overall tax collections show total corporate tax collections increasing almost commensurate with profit rises. We can verify this from the budget papers.

But not at the top end. The big corporations, those with the money for lawyers, barristers, offshore tax havens and big donations to the Liberal Party, are only paying what little tax they choose.

Austerity, deficits and the tax the Coalition won't collect https://t.co/ENZRTDK0Cb @IndependentAus
The good news is they could collect a fair tax from them and solve problem. The bad news is that they're big donors to the LNP on condition of avoiding such.

Triangulating the data from the ABS and the ATO enables a rough estimate of the tax revenue the Coalition Government is not collecting.

We can add a similar shortfall attributable to companies with revenue below $2 billion. And then we must add the losses to Treasury – and to the people of Australia – from those which have never paid taxes and don’t intend to.

A reasonable guestimate of the total is around $38 billion each year. This is consistent with earlier calculations here at IA and informed assessments elsewhere.

'there were four ministers with responsibility for matters relating to the tax and superannuation systems in 2017–18.’

There’s your problem right there.

In his pithy way, @markhumphries @TheFeedSBS sums up what this means for who pays tax in Australia. #auspol pic.twitter.com/chxh5LTxmc