News on Australia’s economy is all negative, despite the gloss the Turnbull Government and its media barrackers are trying to apply. Alan Austin dutifully dissects the dismal data.

TREASURER SCOTT MORRISON responded with satisfaction if not smugness at news of Australia’s gross domestic product (GDP) rising in September. It was up 0.9% for the quarter and 2.5% for the year to September.

This is not great news.

It is nowhere near good enough given the robust economy bequeathed to the Coalition in 2013 and the global recovery underway since. A modest annual rate of 2.75% was forecast in the May budget, with 3.25% expected next year. To generate jobs, wages, profits and taxes to meet current payments – let alone repay the debt – more than 3.75% growth is required. This should have been achieved.

Regrettably, the priority the Coalition placed in its first two budgets on shifting wealth and income from the poor and lower middle to the rich and very rich stymied that completely. That agenda has crushed wages, jobs, retail trade, small business profits and business confidence.

Morrison noted with apparent pride that

"... Australia's annual growth is double the rate of Canada, higher than the G7, and above the OECD average."

Why pick Canada? Its economy was managed by the Turnbull-like conservative Harper Government until last month. Not surprisingly, Canada’s economy has tanked along with Australia’s. Its GDP growth fell from a healthy 3.1% two years ago to 1.2% now. Its jobless rate is up from 6.6% in January to 7.1% now. Terms of trade collapsed from 100.8 at the beginning of last year to 90.5 index points now. Other indicators of poor economic performance are budget deficits, job participation, government debt, workers’ wages, corporate profits and the value of the Canadian dollar. Being better than Canada is like being better than Venezuela. 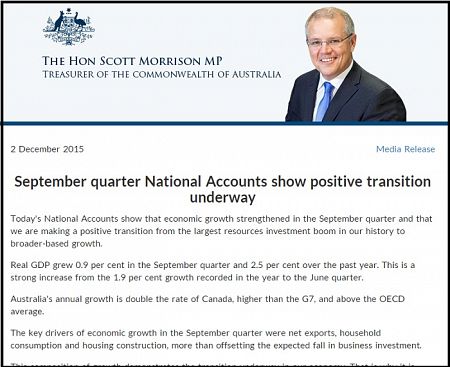 "Above the OECD average"?

Again, barely. Australia’s annual growth ranks 14th out of the 34 developed capitalist economies, comprising the Organisation for Economic Cooperation and Development.  Australia is well behind Norway, Sweden, Slovakia, Poland and even Spain which are above 3%. Ireland, Iceland and the Czech Republic have none of Australia’s natural advantages but are all above 4%. During the GFC, Australia was at or near the top and in the top seven for much of the period since. 14th is a fail.

Beyond the OECD, most of the world experienced strong growth in the September quarter. As this is published, 56 countries have reported September quarter figures. The average for all 56 is 0.92%. So Australia’s 0.90% is below the world average. Probably for the first time ever.

This is not what Turnbull, Morrison and their colleagues promised in Opposition. Joe Hockey repeatedly said the Coalition would “turbo charge economic growth and jobs”.

“Above all, we secure our future prosperity by making sustained economic growth our central objective and ensuring we have a coherent and credible plan for achieving it.  Responsible economic leadership demands nothing less.”

The rest of November’s news confirms the Coalition’s plan is neither coherent nor credible.

Wages rose only 2.47% over the year to September, according to the Bureau of Statistics. This is the second lowest rise on record, the lowest being in 2009 at the depths of the GFC.

Company profits rose by a miserable 0.1% through the year to September. Whether the profits actually fell or are being seriously under-reported to avoid tax is impossible to tell now audits have been drastically cut.

OK. Rudd & ALP saved us from the GFC. I have no faith that @ScottMorrisonMP & LNP can do the same; https://t.co/xg4RGLj3L7 #auspol

Revenue collected by the Australian Tax Office over the last two years fell short of budget forecasts by a staggering $24.1 billion. Analysis of the last two annual reports strongly suggests this is due to the Government not chasing taxes that big business and rich individuals just don’t want to pay.

Finally, Australia’s gross government debt broke through the $400 billion barrier in November. You probably heard the deafening silence from the fawning finance “reporters” across the country.

That’s more than double the rate of borrowings by the Gillard/Rudd Government in its last 12 months — $2.35 billion per month.

The current trajectory suggests the Coalition will have generated the same debt in three and a half years that Labor did in six.
But with two differences: Labor added vast productive assets to the national estate in the form of social housing, roads, hospitals, insulation, school buildings and other infrastructure. And in the process, built the best-performed economy in the world. The Abbott/Turnbull shambles has achieved neither.

More of John Graham's artwork can be found for purchase on the IA store. You can also follow him on Facebook: John Graham Cartoons & Caricatures or on Twitter@JohnGrahamArt. You can follow Alan Austin on Twitter @alantheamazing.

Focus on Shorten has succeeded in painting Labor as the corrupt party. It isn’t. Please read & tweet https://t.co/LDOfQhsTEG @IndependentAus

Hey @ScottMorrisonMP what was that about the Liberals cutting taxes again? pic.twitter.com/QeYQiVHzzQ