The Abbott Government has abandoned any pre-election promises to reduce Australian public debt, with borrowing and interest costs skyrocketing after their first year in power. Alan Austin reports. 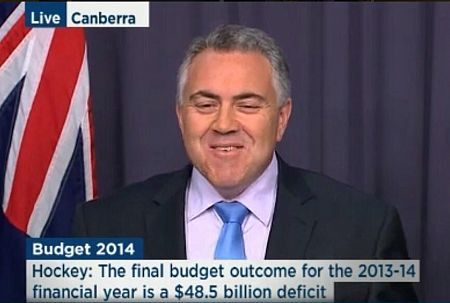 Despite all their rhetoric and hyperbole, both debt and deficit has blown out under the Abbott Government (Image via @qldaah)

THE ABBOTT GOVERNMENT HAS ABANDONED all pre-election commitments to reduce the nation’s ‘skyrocketing debt’. Borrowings have increased dramatically since the last election.

Now we know by how much.

Debt has increased by 13.7% over Labor’s levels. Interest payments have risen a staggering 28.6% to more than thirty million dollars per day — in just the first nine months.

The Final Budget Outcome 2013-14 was released this week by Treasurer Joe Hockey and Finance Minister Mathias Cormann. Buried in the long-awaited document is confirmation that net government debt at the end of June, nine months after the Coalition took office, has risen to $202.46 billion. 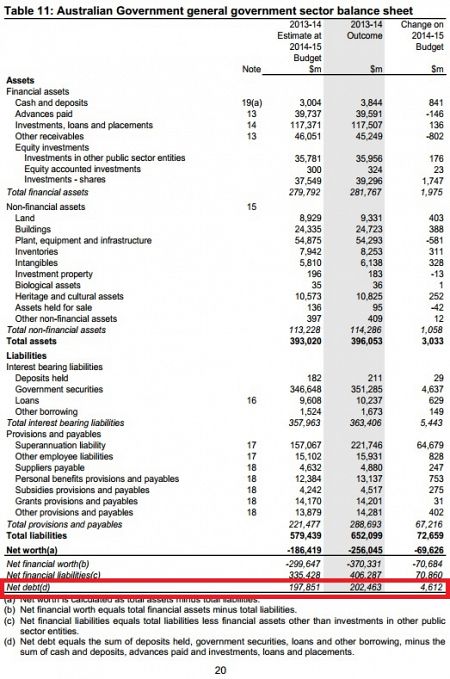 That’s quite a blow-out.

The following monthly report, September 2013, prepared after the Coalition had taken charge, also showed projected year-end debt steady at $178.10 bn. So did the October and November reports. 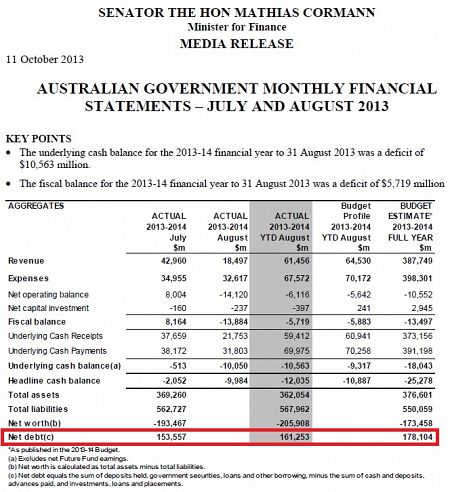 In December, however, following several decisions by the incoming treasurer, including abolishing the debt ceiling, the debt projection jumped to $191.52 billion.

This number was reaffirmed in January, February, March and April 2014. In May, it was increased to $197.85 billion. Then, without notice, monthly reports ceased.

Clearly, the actual outcome under the Coalition is a cool $24.36 billion more debt than forecast had Labor stayed on. Up 13.7%.

Hockey has, of course, attempted to blame Labor:

‘The Final Budget Outcome for the 2013-14 financial year is a budget report card on the previous Government’s irresponsible fiscal and economic management.’

Hardly. Mr Hockey has had more than 42 weeks – and a clear mandate – to reverse anything ‘irresponsible’. Instead, wasteful spending has increased, including dubious travel for ministers and their entourages, costly royal visits and expensive politically-motivated royal commissions. 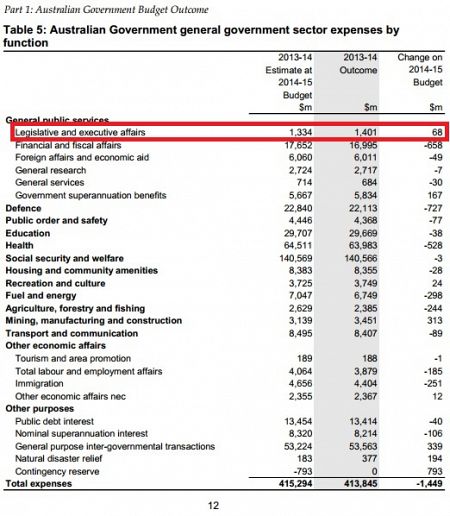 Table 5 of this week’s Treasury document shows that in just seven weeks between the May budget and June 30, expenditure on ‘legislative and executive affairs’ blew out by a staggering $68 million.

That was not Labor’s doing.

Other unjustifiable spending by the Abbott Government includes its punitive border protection regime and an $8.8 billion grant paid to the Reserve Bank that it didn’t ask for and doesn’t need. On the revenue side, equally damaging failures include abolishing the carbon and mining taxes without adequate replacement income. Those were not Labor decisions.

This week’s proof of the debt expansion follows confirmation after the May budget that Abbott and Hockey had more than doubled the projected budget deficits over Labor’s levels.

ABC Fact Check unit showed in June that government decisions increased the deficits for the four-year forward estimates period by more than $68 billion.

Clearly, there is no commitment whatsoever to

‘… balance the books, live within our means and return the budget to surplus as quickly as possible.’

Gone are the dire warnings before the last election of debt ‘spiralling out of control’.

So if the debt was more than $202 billion in June and rising rapidly, what is it now, three months later? Well, we just don’t know. The debt reports produced monthly since December 1999 have suddenly stopped.

Independent Australia asked the Finance Department why this was and when the next statement would be released.

How long after? We shall see.

Meanwhile, we now know what the extra debt is costing. A year ago, the Final Budget Outcome for 2012-13, released by incoming treasurer Hockey, showed net interest payments on the debt were $8.3 billion for that year – the last full year Labor managed the economy. Labor’s projected interest bill for 2013-14 was then $8.4 billion, according to Treasury and Finance’s Pre-election Economic and Fiscal Outlook. 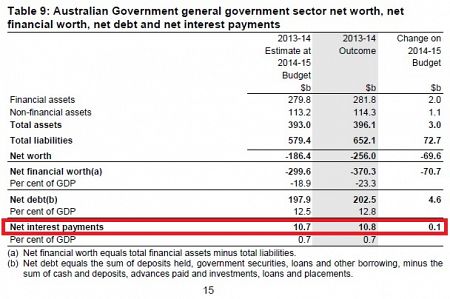 Of course, this debt increase is of no immediate economic concern provided the investments are well-managed. There are compelling arguments that Australia’s debt has been too low given negative real interest rates and the opportunity for investments in productive infrastructure.

Australia’s debt to GDP ratio is a mere 12.8% — even with the recent Hockey blow-out. If that were doubled Australia’s debt would still be less than Switzerland’s. If tripled it would be less than Canada’s. It could be multiplied by six and remain lower than Germany’s and the UK’s.

All these countries have a triple A credit rating and hence no discernible debt problem. And, of course, neither does Australia.

Australia does have, however, a surplus of government hypocrisy and a deficit in truthfulness and competence. 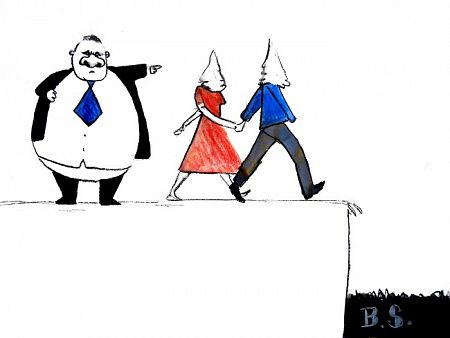