The PM bellowed that he was “appalled”, he was “disgusted” with the “abuse of taxpayers’ money” and that it was “disgraceful”, before the suitably theatrical finale of, “And it’s not on!”.

It’s firstly comical that the PM can say the words “gold watch” with a straight face, given another gold watch fiasco a few years back. During that particular gift bonanza, it was Coalition ministers who received gold watches. Worth $250,000, those Rolexes were worth ten times as much as the "bargain basement" ones Holgate bestowed. One of the recipients of those earlier and classier timepieces was also Stuart Robert — a senior minister in the current Morrison Cabinet.

This, however, Morrison was neither shocked nor appalled to discover.

Morrison’s confected outrage over Holgate's gifts to executives is even more disconcerting when you consider that it is his hand-picked Australia Post board that approved these particular gold watches in the first place.

Yet, in his characteristic, "let’s-find-a-scapegoat" style, it is only the current CEO who has warranted the PM's furious displeasure.

And Communications Minister Paul Fletcher jumped on the outrage bandwagon faster than you could say "Western Sydney Airport land deal".

"I have not used taxpayers’ money. We do not receive government funding. We are a commercial organisation … It was a recommendation from our chair that these people get rewarded.”

In an added twist, hundreds of post office licensees across the country are each mailing Prime Minister Scott Morrison a $5 note in a show of support for the Australia Post CEO.

‘"There's a huge groundswell of support for Christine Holgate."

According to Cramp, the watches were "minuscule in the face of $100 million in savings each year for five years" and a fraction of the money Holgate has saved Australia Post licensees and taxpayers.

Areas that should warrant some of the outrage the PM found for the watches but apparently do not, include, but are not limited to: 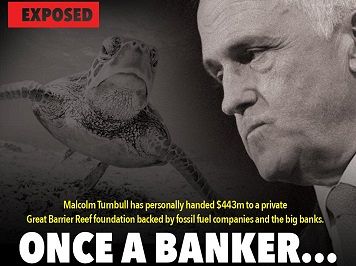 Turnbull, the #Reefgate rort and Rupert

The Reefgate rort may be the biggest scandal in Australian political history — but is just the latest in a long line of taxpayer cash splashes from Turnbull to his cronies, including the Murdochs.

Then there are the CEOs still raking in the mega bonuses while claiming JobKeeper handouts and even sacking staff, such as:

If we extend the scope of Morrison’s dubious moral compass to include state premiers, it seems incongruous that his “gold-standard” premier, Gladys Berejiklian, whose deeds have her mired in alleged corruption, have, by contrast, only inspired the PM to pledge his absolute support.

Lastly, if none of the above warrants Morrison’s immediate attention or outrage, then his Government’s growing list of failed promises should at least warrant ours.

Here are a few that come to mind:

It's easy to brag about gold standards and make promises you have no intention of keeping; as easy as feigning outrage over four gold watches while billions are being pilfered.

Instead of the endless PR and diversion tactics, it is time the Morrison Government was held to account. Perhaps Scotty from Marketing needs to invest in a good time-keeping mechanism to help him find the time to finally organise a Federal independent commission against corruption.

While the Morrison government’s loudly condemned questionable spending at Australia Post this week, it’s dragging the chain on a national anti-corruption watchdog.

So why the double standard? Is It time for a national anti-corruption commission? pic.twitter.com/UR2izMkpC5