Queensland: Pendulum swinging back to Labor for #election2016?

Queensland's backlash against the Rudd/Gillard Government delivered Abbott in 2013. John Maycock writes it's time to abandon the LNP whose attacks on health care, pensioners, retirees and low income earners are turning the tide of anti-Labor sentiment.

IN THIS hopefully prophetic IA article by Dr Martin Hirst, he suggests an

'.. all out "News Corpse" attack on Labor (ALP) over the next few weeks. We saw how successful this was in 2010 and 2013, and Murdoch’s hacks will pull out all stops to see Shorten defeated.'

Of course, Dr Hirst is referring to the hung Parliament and the Labor minority government of 2010 and the failure of Labor at the 2013 election — while also pointing to the influence the conservative propaganda machine and the MSM had on those outcomes.

However, when looking at the 2010 election in regards to ‘seats which changed hands’, a slightly different story emerges. This is not to say Dr Hirst is wrong about the MSM attacks on Labor. Indeed the 2010 outcome itself was a boon for Murdoch and Abbott, they “folded it into their repertoire”. Illegitimate government doing dirty deals backflips and lies. But also to push a myth that there was a groundswell across the nation abandoning Labor policies in favour of Liberal policies. Team Australians were flocking to Abbott’s cause — apparently.

To see what actually happened you have to initially leave out the Queensland results, where Labor lost seven seats to LNP, when looking at the numbers. So firstly, what happened with the rest of the country?

Bennelong went from Labor to Liberal, which was to be expected as this is the “blue ribbon” Liberal seat lost by Howard in 2007, as did Hasluck and Macquarie — but on the other hand, Greenway Latrobe and McEwen all went from Liberal to Labor.

There was no real shift in the national zeitgeist towards the Tea Party ideology of the Abbott “circus” — but there was certainly a ratcheting up of a media driven “manufacturing of consent” to the contrary “creamed off” the 2010 outcome.  And here it was Queensland that did all the damage. Had Queensland followed the national trend there would not have been a hung parliament and Abbott would never have gained that propaganda bonus that led to him taking government in 2013. (Of course this is not to say that things would have gone the other way, just the possibility that they may have.) 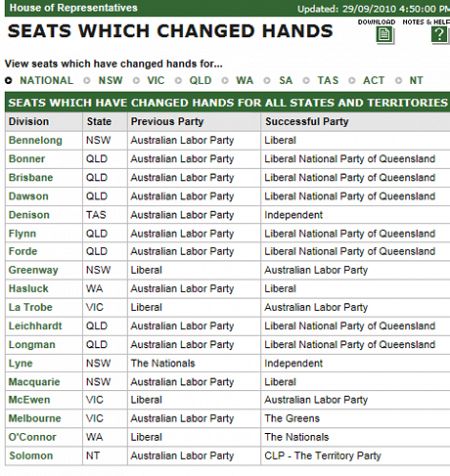 So what went on in Queensland?

Some suggested that the 2010 Queensland Federal vote was more to do with a backlash against Labor and Anna Bligh. Perhaps it was that they couldn’t punish Bligh until the next state election. So giving a hint of what was to come for Queensland in 2012, they punished Labor Federally.

Consider, Julie Sibraa from Wells Haslem suggested that the 2010 Queensland swing could;

‘…be attributed to… the dumping of Queenslander Kevin Rudd, the mining tax and the unpopularity of the then State Labor Government.'

Or from a different perspective, for Margaret Gleeson at the GLW writing about the 2015 demise of Newman and his government the:

‘Voters [had] sent a clear message to the LNP and the ALP that privatisation of public assets will not be tolerated. [In that it was] [t]he electoral backlash against privatisation [that had] led to the ALP being reduced to… seven in Parliament’ (the 2012 state election).

While John Wanna from The Conversation, discussing the then pending 2012 Queensland state election, under the subheading ‘Labor hatred vented?’ suggested that:

‘The big interest in the Queensland election from a national perspective is whether Queenslanders will have got the anti-Labor sentiment out of their blood before a federal election comes is due’ [sic] (the 2013 Federal election).

So Queenslanders had a problem with Labor due to the Gillard/ Rudd coup, mining taxes, and the State Labor government privatising infrastructure. The hatred had not vented by 2012 when they elected Newman. And come 2013 not only did two more Queensland Labor seats fall but the rest of Australia - having succumbed to the “memes” built around the minority government - voted Labor out.

Now Martin Hirst in his follow up article lists eleven Queensland seats that hold a chance for Labor, of those seats seven of them are the ones that Labor lost in 2010 and two were lost in 2013. However, supporting the notion that Rudd’s demise was partly behind the backlash, six of those seats along with another two fell from Liberal to Labor in 2007. Note that Rudd became leader of the Labor party in December 2006. While it seems the reinstatement of Rudd prior to the 2013 election was not enough to pull those seats back to Labor, perhaps the hate was still simmering.

Encouragingly, those seats, Bonner, Dawson, Forde, Leichhardt, Longman and Petrie are obviously capable of swinging, and perhaps if voters within those electorates see beyond the personality politics that appears to have driven them over the last three federal elections —and if they are also in the anti-privatisation camp, there is a chance they may swing back to Labor.

As well, the seat of Brisbane was Labor prior to 2007 while Flynn, created in 2006, went to Labor in 2007. But both fell to LNP in 2010. Perhaps the anti-Labor issue with the voters in these seats was more to do with privatisation, which is also encouraging - while Capricornia which fell in 2013 is more traditionally a Labor seat. These seats could also swing back to Labor.

That is nine seats from Dr Hirst's list where he could be right on the button. The Newman experience may have dampened Queenslander’s ardour toward Tea Party politics. They certainly turned on Newman once they realised his agenda. If Queenslanders are opposed to privatisation the attacks on Medicare, this should be reason enough to abandon the LNP, as should the attacks on health care, pensioners, retirees, low income earners and the poor. Indeed, the incompetence controversies, lies and arrogance of the Coalition alone should be enough to have turned that tide of “anti-Labor sentiment”. And surely time has healed the wounds of the Rudd/Gillard disaster.

However there is an elephant in the room which Dr Hirst touches on when discussing the seat of Dawson and the incumbent George Christensen’s margin of 7.6%:

‘There would need to be a local backlash against the rabid right-wing Christensen for him to lose’.

Islamophobia and xenophobia –  refugees, boat people and immigrants, mosques, Christmas carols and national anthems, what we eat and what we wear – these notions appear to have a solid foothold in Queensland. Consider, nine of the twenty locations across Australia that “hosted” Reclaim Australia rallies twelve months ago were in Queensland — and here it would seem that it will take a state-wide backlash against the rabid right to turn things around.

So then my fellow Queenslanders, could we focus on the real issues come Election Day?

After all, it was our doing. We hi-jacked the 2010 election thrusting the nation into apparent political chaos and driving the trend that brought us Abbott in 2013. And let’s not forget the lesson we taught ourselves when we punished Bligh. We rid ourselves of Newman once we realised what we had done.

Perhaps now is the time to pay our penance to our fellow Australians and do our bit to help rid Australia of the scourge we selfishly brought upon them.