Is Turnbull edging closer to catastrophe with latest polls and demise of his loyalists?

This week's opinion polls and likely demise of his loyalists seem to point towards a catastrophe for Turnbull and celebrations for Shorten, writes Dr Martin Hirst.

THIS IS not good news [The Australian paywalled] for Malcolm Turnbull.

'The Turnbull Government is facing the prospect of losing 10 seats in NSW, six in Queensland and three in Western Australia, with a significant slump in support in the key election battlegrounds.'

The Australian headlined a 6% swing against the government according to its own Newspoll data on 30 May.

I wrote this piece the day before [Sunday 29 May], without seeing the Newspoll data. Then in Monday's Fairfax papers we also saw confirmation that the coalition is in trouble. James Massola wrote that the LNP is likely to lose at least a dozen seats and maybe even more.

'Political strategists for both major parties believe the Coalition is on track to lose about 12 seats at the July 2 poll, slashing Malcolm Turnbull's buffer in the Parliament but returning his government with a reduced second-term majority.'

Seems like I might be on the money with my prediction of a Shorten ALP government after the election.

But the numbers depend almost entirely on who's doing the counting.

For example, Labor thinks 11 seats in Queensland are in play, but to others the margins in some seem insurmountable. For example, it would take an almost unachievable 6.7% swing to unseat Immigration Minister (and part-time potato model) Peter Dutton in Dickson. But some plucky voters have a strategy to help make it happen on polling day.

Mr Potatohead is suing Sinister Mutton for a breach of copyright

The key thing is that local factors will influence the national swing and an average swing of around 4% may not be enough to unseat Turnbull if it does not occur in the right electorates (those that the ALP needs to win back and has a realistic chance of winning).

Polling is politics, not science

Opinion polling is not an exact science. Polling in Australia is controlled by commercial entities that are interested in packaging and selling data, not necessarily in accurate and useful conclusions. We also have to be wary of the margin of error, which can, at times, be greater than the difference between the party options. Methodologies differ too, which means that there is little, if any, comparability between polls.

So with that disclaimer in mind, are the polls an accurate predictor of election outcomes?

Yes, within their limitations they can be. But the limitations are legion and cannot be ignored:

The other major factor we have to take into account is that there are big regional differences in voting intention based on more localised factors. Often in Australia, we conveniently identify the regions with the state and territory boundaries. This is crucial when discussing the potential for a swing one way or another. The swing is never really uniform across regions or states and sometimes very local factors (within one electorate, for example) can mean that no amount of telephone polling can ever accurately predict how people will vote.

We know that a uniform national swing of between 4-4.5% will deliver government to the ALP, but state differences mean that the national average may not deliver enough seats if regional variations are greater than the national swing.

Therefore, we need to look at the poll numbers on a state by state basis if we are to get any kind of read on what might happen in five weeks time.

A state by state breakdown

According to Roy Morgan (16 May figures), the Coalition currently only has a very slim two-party preferred lead in one state, but the numbers appear to be all over the place.

There are three crucial seats in Tasmania and the ALP needs to win at least two of them to have any chance of winning nationally.

To win governmentm, Labor would need to capture Braddon and Lyons from the coalition. Lyons comes at 1.7% and Braddon at 2.6. Both are achievable, but state factors may hold Labor back in Tasmania.

On the Morgan figures though you would have to concede that the Coalition is right to be worried about its hold on the Apple Isle.

The figures in Victoria seem to mirror what's happening in Tasmania. The ALP lead on 2PP is 56.5% versus the Coalition's 43.5%

The Coalition is rightly worried about Corangamite, Deakin, Dunkley and La Trobe. However, the Greens may put up a fight against the ALP's accident prone Dave Feeney. On the other side, some commentators are still saying that the Turnbull factor will help the Coalition in Victoria.

Personally, I don't think this is right. Turnbull is not part of the state's patrician Liberal establishment and the IPAlite push in Goldstein and on the Victorian senate ticket does not align with Turnbull's factional interests. I think that Turnbull is so on the nose nationally that he cannot help in Victoria.

In 2013 the statewide swing in WA to the coaliton was notionally only 1.7%. The Morgan poll in mid-May indicated a swing back to Labor of 8.8%. This would be more than enough to secure a Labor victory

Two weeks into the campaign and Morgan has the ALP in front with 54% over the Coalition on 46%.

Labor is hopeful of picking up two seats in the west, Hasluck and Burt.

In mid-May, according to Morgan, the numbers stood at 53% for the ALP and 47% for the Coalition. The seat of Hindmarsh is one that Labor hopes to pick up. South Australia is a state where a swing against the Coalition is likely to be strong given many people see the Abbott Government as turning its back on the state's biggest employers — the auto industry and ship-building. The submarine contract is a big bribe to the electors of South Australia, but it may not be enough to save Turnbull.

Morgan puts the ALP only just in front on 50.5% and the Coalition is close on 49.5% but the unpopularity of the Mike Baird LNP Government at the state level may help Labor federally.

According to insider analysts, the Coalition could lose Barton and Dobell (both notionally Labor after a redistribution), Eden-Monaro, Lindsay, Macarthur, and Robertson. Banks, Page and Patterson could also be added to the list if the swing goes viral.

Labor needs to do well in western Sydney and on the central coast to win back the so-called Howard battlers who deserted the ALP 20 years ago and are yet to all come back. However, anecdotal reports from those doing campaign work on the ground in Sydney's commuter belt indicate the local mood is not necessarily for change.

A team of us spent last week in western Sydney targeting the commuters and to say we came away gutted would be an understatement, but back we go again this week. The polling from both pollsters and parties aren't showing up too well for Labor in these must win seats. The swing back to Labor across western Sydney is in the order of 3.5%. Not enough!

The surprise was the Penrith heartland seat of Lindsay, where Labor’s primary vote has tanked five points to a low of 34% (Fiona whatsits seat !).

There is also the number of retiring MPs that cause a problem as people no matter how politically disconnected seem to stick with those they know. This always creates a drop for the newbies no matter how talented they are, unless they are a known celebrity having a crack at politics.

All up plenty of struggle ,but the thing that did come out of last week's efforts are voters are warming to Bill and want their Medicare, NBN, Gonski and general health care saved.

What is keeping Turnbull's boat afloat is the punters see him as best at the economy and stopping the boats.

The Sunshine State is the only place where the Coalition leads 51% to 49 for Labor.

Significantly, this is where Shorten spent time during the phony war period of the campaign targeting seats around Brisbane and in the north of the state that the ALP would like to win. It is ambitious, but winning all these seats in Queensland would almost certainly secure a Shorten win.

Six urban seats (Brisbane, Bonner, Dickson, Forde, Longman and Petrie) are worth keeping an eye on over the next few weeks. Five regional and rural seats (Capricornia, Dawson, Flynn, Herbert, and Leichhardt) might also be in play.

But how realistic is it that Labor can win all its targeted seats in Queensland? Well the margins make some of them difficult. For example, Labor would love to topple George Christensen in Dawson, but his margin is 7.6%. This is way above the notional national swing which Newspoll generously puts at around 6% at this point in the campaign cycle. There would need to be a local backlash against the rabid right-wing Christensen for him to lose.

There are only two seats for the whole of the Northern Territory, Solomon which is based on the city of Darwin and Lingari which takes in the rest of the territory. Labor is hopeful of picking up Solomon, which it can do with a swing of just under 2%.

Labor holds the two ACT seats with a comfortable margin and will continue to do so.

To give you an indication of how volatile the election is, I played around with the ABC's House of Reps results calculator and this is one version of how an uneven state-by-state swing can deliver government to Bill Shorten. 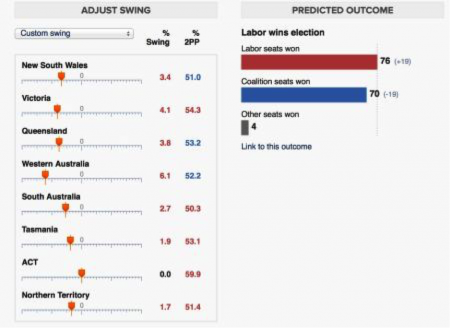 It really is a case of swings and roundabouts. You should try the results calculator yourself.

How Turnbull could win an early election but lose control of his party: https://t.co/w6EGUAN1KN #auspol pic.twitter.com/Ez7pvCgiPM

And if Turnbull wins but loses his loyalist base?

In an analysis by The New Daily in March, entitled 'Why Turnbull could win the election — and still lose',  George Lekakis writes:

'But Malcolm Turnbull could pay a heavy price for being returned to office. Many of those who supported his bid for power are likely to lose their seats if there is a swing against the government, leaving his prime ministership at the mercy of Liberal party members who remain loyal to former PM Tony Abbott.'

Turnbull's loyalists predicted to lose their seats are:

This could leave Turnbull captive to the right.

Will Turnbull be leader after the election? This story going gangbusters on social media. Read why https://t.co/9sLhI700AQ #Election2016

Either way, this week's opinion polls seem to point towards a catastrophe for Turnbull and celebrations for Shorten.

Only time will tell.

Revealed: the 12 seats the Coalition thinks it could lose to Labor on July 2 https://t.co/NQ9DFoeDs3 via @theage