EXCLUSIVE: News from the Sensible Centre™

While the Doc is on holidays we are delighted to introduce a new voice to IA, Sensei Bill, our spy inside the Sensible Centre™. This week, Bill has sent us a draft newsletter that is due to go out tomorrow to all its members.

[Note to boss: Sir, this is a DRAFT ONLY. I have been careful not to use the word FUCK, instead coding it to f**k so as not to offend anyone. Feel free to send corrections and suggestions. Note the deadline for changes is COB today.]

You are boys and girls, right? As you know, the Sensible Centre™ has a “boys and girls only” policy so, please, if you are one of those confused “Alphabet Children”, close your browser now or go here. Remember, help is only a click away.

You see, it is only fair that supporters of the Sensible Centre™ have their own safe place. We know how precious each and every snowflake is to their mummy and their daddy. You do have both a mummy and a daddy, right? If not, please close your browser NOW and go HERE. Someone will always be available to console the afflicted.

The Sensible Centre™ is inclusive and welcomes everybody from the Cory Bernardi faction, Pauline Hanson’s One Notion, Shelton Lyle’s Christian cult, Liberal Party members from Tony Abbott’s electorate, secret donors to the Institute of Public Affairs and all True Blue patriots. If you are not included in this list of inclusion, please CLOSE THE F**KING BROWSER AND GO HERE. You can’t help the tint of your skin tone, but it’s nice to be white on the inside.

We even appreciate the support given to us by friends of the Prime Minister. In fact, once we showed him the pictures, Malcolm was delighted to become our interim patron saint. He will hold that position until we can whitewash Sinister Mutton and he will then take the esteemed title of Potatohead-in-chief.

We are externally grateful to Ms Albrechtsen for penning a most glorious speech on behalf of the incoming Potatohead. She has captured his zeitgeist in the most appalling appealing way.

Thankfully, you can read the speech in-full by clicking on Mr Kenny Devine’s helpful tweet and don’t have to attempt a breach of Mr Murdoch’s fully-functioning paywall:

Suffering from cringe-deficiency?
Looking for a cure?
Read this weird speech Janet Albrechtsen has penned for Peter Dutton.

A week of highlights and lowlifes

There is never a dull moment for the dedicated staff of the Sensible Centre™. Our team works day and night to ensure that only the good news is on the front page and that our mistakes, secret deals and shady transactions are buried up close to the sport news. We like our news clean and tidy, and try to keep all the embarrassments, like Bananaby, out of harm’s way. But sometimes we trip up, like we did this week with Minister Senator Caravan’s citizenship status.

How were we to know that his mother was such a Babushka. I mean, come on, he didn’t even know. And before you get your knickers in a twist, this situation is most definitely not the same as those two Green senators.

They deserve to be hounded out of public life, after all as our best-ever fan bois Patto and Wilso tweeted this week, there’s no way we should change S.44 of the Constitution just because the Greens can’t do administration properly. 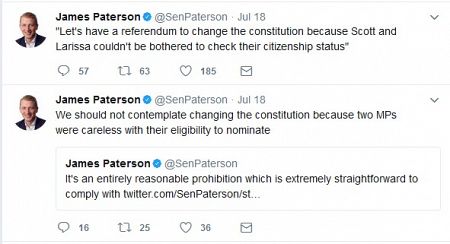 Of course, it is right of the Sensible Centre™ leadership to ignore the schadenfreude inherent in our two-faced approach and refer Senator Caravan’s totally different circumstances to the High Court. Even if (fat chance) it rules against us, we can keep the Senator in the outer party to secure some essential votes.

Of course, we have a fall-back position for such mishaps. The Sensible Centre™ has adopted a slogan for all seasons and all situations. It’s an oldy but a goody and it covers a multitude of sins.

Or as we like to read in our favourite and highly diverse news outlets, Mamma mia, that was a close shave. 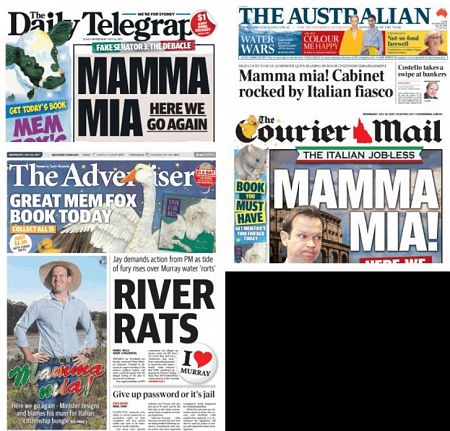 Yes, pure and simple; hypocrisy is our moral code — or at least that’s what we tell ourselves in moments of self-reflection. Most of the time, there is no moral code, just what’s good for us and a firm belief in our own innate superiority — even Bananaby. In reality, we just do whatever the f**k we want and say consequences are for losers. Because here in the winner’s circle, there are no consequences.

We live by the rules, play by the rules and make up the rules as we go along. If you don’t like the rules then, and we’re sick of having to say this, but: GO AWAY AND PLAY OVER HERE. Those Alt-Right boys know how to deal to the losers.

Of course, making up the rules is entirely appropriate in the case of Minister Senator Caravan. His vote on the executive committee of the Sensible Centre™ is vital to our ongoing success. That is why we have generously allowed him to remain in the outer party and to continue voting on important Sensible Centre™ initiatives, such as giving money to the mining industry and continuing to promote Sinister Mutton’s grasping and clasping for power in the supersized Ministry of Love.

So Matt Canavan thinks the job of Minister for Northern Australia is purely to support the mining industry. Says it all. pic.twitter.com/Ao9s6AK47a

We know that Sinister Mutton is unelectable in a fair contest and that’s why we are doing everything we can to give him a makeover and to install him as CEO of the Sensible Centre™ in plenty of time for him to engineer another crisis and steal the next election. So, it’s appropriate that we should give an honourable mention in this week’s newsletter to one of our founding fathers, Tony “Two-Punch” Abbott. He is doing his level best to help Sinister Mutton while continuing to not snipe and wreck from the sidelines.

The real enemy is… "Look, over there, a Muslims!”

As you are no doubt aware – if you’ve been reading previous newsletters – our enemies are dangerous losers who want to do away with equal inequality and bring in unequal equality. Our committee has been doing a great job of p***ing on this idea from a great height and we understand that our donor base is very happy with the progress we’ve made, but much more has to be done. Please remember to say your evening prayers and repeat the holy incantation “Gina, Shenhua, Twiggy, Adani” and to teach it to your boy and girl children.

As you also know, the leader of the loser faction, Mr Bill Shorten (we like to call him Dull Shortarse, hahaha!), is perilously close to toppling our current chairMAN Malcolm #Fizza Turnbull.

apparently this is what the sensible centre looks like pic.twitter.com/dTAqetgnYJ

And while we respect Mr Turnbull’s grim stranglehold on the chair (for now), we cannot allow Dull Shortarse (we never tire of that joke!) to knock him off his perch. It is our firm belief that only another member of the Sensible Centre™ should be allowed to do knife a current chairMAN in the back.

We are very good at giving loser Shortarse a serious wedgie, particularly on the growing and immensely dangerous threat of terrorist Muslimism. Mr Shortarse is unable to compete with us for horribleness and that’s how we like it.

Here at the Sensible Centre™, we have a policy, though we can’t share it with you just yet, of banning immigration from certain Muslim-majority countries if said migrants come by boat. We have all sorts of nefarious deals going with totally inappropriate governments to help us secure our borders, and we are now shifting that inappropriateness to record new levels thanks to the promotion of Sinister Dutton and the creation of the super-duper Ministry of Love.

Yes, we did mention this already, but it is such exciting and glorious news that we had to share it with you again. Also, we wanted an opportunity to kick that serial pest, “Professor” Gillian Triggs in the head one more time. She is moaning and bitching again, and refuses to be put in her place, despite all the hard work done on behalf of the Sensible Centre™ by our loyal minions in the News Corp media. Bloody Triggs just won’t lie down and die, which, if she had a shred of decency she would have done years ago.

So what if Sinister Dutton has extraordinary powers of arrest, detention and surveillance. So what if the Left-dominated “fake news” peddlers don’t like it. They should cry on someone else’s shoulder because, quite frankly, at the Sensible Centre™ we are all out of f**ks to give.

If you’d like to subscribe to the Sensible Centre newsletter, you can do so by contacting us via this email media@border.gov.au.

After this exposure
How can Austns accept @BarnabyJoyceLNP?
He cannot stay in Parlt
And must RESIGNhttps://t.co/wdLJBYgfrL

Did Barnaby Joyce just say 'my grandmother is English...I've never been to England' ?
Here he is in England last month. pic.twitter.com/N8vikwQFGw

Dear Scott, we have to talk about Peter

4 August 2017, 4:00pm Once again, Sensei Bill inside the Sensible Centre™ has given us exclusive access ...
Join the conversation
comments powered by Disqus
News updates