Prime Minister Scott Morrison has not only proven himself a failure to Australians but also on the world stage, writes Bruce Haigh.

AS EACH DAY PASSES, Prime Minister Scott Morrison diminishes in size. He hitched his political wagon to a failed policy of opposing lockdowns and encouraged NSW Premier Gladys Berejiklian to do likewise.

This policy is in the process of crash-and-burn, apparent to all except Berejiklian. Morrison, or at least the precocious minders who surround him, can see it and the political danger posed. Morrison has declared for hard lockdowns but too late.

He has been widely condemned for his failure to rollout vaccines and to build stand-alone quarantine facilities, both Federal Government responsibilities.

Morrison is a shallow, superficial bully whose only concern has ever been himself. He singularly lacks ability, including any form of intellectual strength. More importantly, he lacks leadership; as the crisis of COVID-19 deepens, so does insight into how limited are his capabilities in this area.

Morrison is not helped by the dearth of talent on his front bench. We see Labor leader Anthony Albanese saved by the talent of many of his shadow ministers. Not so with Morrison — in fact, they most often dig his hole deeper.

His handling of the Christian Porter rape allegations and the parliamentary rape of Brittany Higgins has revealed an ugly man bereft of morality and belying claims that he is a Christian. It is far easier to substantiate claims that he is a fraud. And this characteristic is highlighted by Audit Office findings relating to LNP placement of funds, amounting to rorting of grants for sporting clubs, car parks and other infrastructure development to LNP electorates. 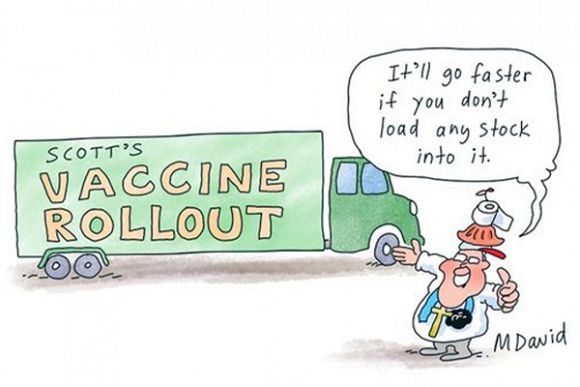 Just as Morrison and his lacklustre parliamentary LNP have to deal with COVID-19, they also have to deal with climate change — but they can’t. Lack of intellectual capacity coupled with a weird revisionist ideology has rendered them as immobile as a kangaroo in the face of a brace of spotlights. They can’t move, can’t think and can’t compute the danger.

But they will because Australia is about to be hit by carbon tariffs from the EU, UK and the U.S., which certainly has our back while pondering just how many knives it can put into it. Europe and China have been hit by massive floods and Canada, the U.S. and southern Europe with forest firestorms. They are in no mood for Morrison’s crap. If he puts his head up, it will be shot off.

Starting with John Howard and his racist policies toward refugees, Australia has worked itself into pariah status on equal footing with Apartheid South Africa. We are neither respected nor liked. Morrison was variously treated like the village idiot, a gate crasher and lightweight at the G7 meeting in Cornwall and U.S. President Joe Biden snubbed him at his climate change meeting. He has not garnered the respect of one foreign leader but he has made a permanent enemy of Chinese President Xi Jinping.

The Chinese have no incentive to improve the relationship with Australia until Morrison and the LNP are gone from power. There is anger at Morrison knowingly having sought to humiliate Xi. Their opinion of Defence Minister Peter Dutton is not much better. They are aware of his ignorant deep-seated racism. The LNP seem not to understand or comprehend that the Chinese have the capacity to listen to many of the dirty, cheap and racist conversations undertaken and remarks made by some senior LNP figures on their mobile phones.

Australia under the LNP has lost significant markets to China, many taken up by America as it watched our back, because of sanctions imposed following Morrison’s rude and gauche pronouncements. And more will be lost. The LNP, by listening to the Institute of Public Affairs (IPA) and the U.S. acolyte, the Australian Strategic Policy Institute (ASPI), will ensure that.

Having gone from the mantra of balanced budgets under Howard and Peter Costello, the LNP is now spending with little thought on how the money will be repaid. It has doubled the debt in five years. It has not opened up new markets and how could it under Trade Minister Dan Tehan? 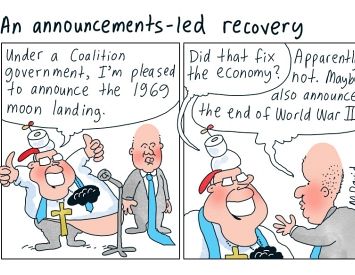 Sailing up and down the South China Sea within kilometres of the Chinese coast in company with the U.S. and UK navies is not a measure that will open up a dialogue with China. It confirms in the Chinese mind that we are sycophants to imaginary U.S. power driven by fear, insecurity and an inferiority complex. Like an annoying lap dog, we bark at China in the false belief that the U.S. will never take us to the pound.

One thing the Morrison Government has not got its head around is the prospect of COVID-19 induced social unrest. COVID-19 is causing untold hardship in poorer countries and heightening existing social and economic tension. We have seen violence erupt recently in South Africa on the pretext of the gaoling of former President Zuma but, in fact, resulting from unaddressed issues of poverty exacerbated by COVID-19.

The last American Presidential Election was in part defined by Donald Trump's refusal to acknowledge the fatal consequences of COVID-19 which played out against him at the ballot box. The same could happen in Brazil and the UK.

Recent unauthorised demonstrations in Australian cities ostensibly against masks, lockdowns and vaccinations, indicate deeper social unrest and are likely to be played out further as the Federal and NSW Governments deliver mixed and, at times, contradictory messages which are creating division, anxiety and anger. The effects of climate change will feed into fear and uncertainty. Social volatility is likely to be a feature of our newly emerging world.

China seems aware of this. The CPC is shoring up its control while ensuring that domestic expectations are met. The last thing it seeks is war. On the other hand, internal division, social upheaval and violence is growing in the U.S., providing impetus to create a unifying external enemy.

These changes are beyond Morrison to comprehend, let alone manage. Would Albanese do any better? He certainly couldn’t do any worse. The challenge is beyond what Australia has faced in recorded White history. It is time we took our Indigenous brothers and sisters on board to help us all find a way forward.