IS THE LAST TIME any infrastructure upgrades were made in your local area about the same time The Hunger Games movie franchise topped the box office? Do your children get changed out in the elements to play sport on rubble? And as you catch the train for work every morning, does the station car park resemble the MCG on Grand Final Day?

These things are obviously all your fault since you clearly live in a Labor electorate.

In a recent television appearance, stunning for its arrogant acknowledgement and matter-of-fact justification of the greatest level of federal pork-barrelling in living memory, Finance Minister Simon Birmingham simply shrugged as if blatant rorting was a natural part of any government’s activity.

The Auditor-General delivered a scathing report… on the Government’s $660 million commuter car park fund. The process…was not open or transparent, there was no evidence of value for money, projects were nominated by Coalition MPs and candidates, the overwhelming majority of the cash went to critical Coalition seats, most of the projects were signed off by the PM the day before he called the election and went into caretaker mode. …

Can you honestly say this was an example of good government?

A long speech, delivered in Birmingham’s characteristic monotone followed, in which he defended all of the above scathing criticisms detailed in the Auditor-General’s report and pretended to understand the concept of democracy, only stopping short of congratulating himself on a job well done.

Speers, to his credit, persisted, interrupting with this:

“The Auditor-General says this was not needs-based…if you look at the evidence of where congestion is the worst, that’s not where this money went. It went into Coalition seats you were trying to hold and win.”

In response, a straight-faced Finance Minister pointed the finger at the electorate and said:

“The Australian voters had their chance and voted the Government back in at the last election...”

In this breathtaking justification for the latest in a seemingly endless list of rorting from the Morrison Government – the one in which he ostensibly "manages" the finances – Birmingham claimed the behaviour was consistent with the rules — the ones they make up as they go along. 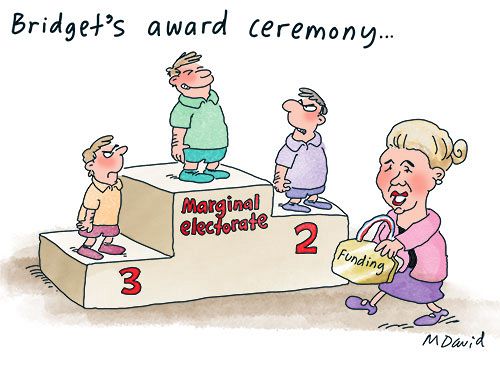 Just what does it take to be sacked or even demoted in the Morrison Government?

By these standards, then, Coalition governments can nonchalantly justify any and all behaviour — and essentially, they have done exactly that to date. The ministers responsible usually escape any consequences for their conduct, are occasionally dropped from the Coalition Ministry (though rarely actually sacked) and are often rewarded for their dubious or allegedly corrupt activities with reinstatements or even promotions.

And this Federal Government has repeatedly pulled the veil over our democracy, shamelessly using the privilege of government for personal gain such as in the following, by no means conclusive, examples:

1. the rorts that follow Energy Minister Angus Taylor wherever he goes, including water rights for family and friends;

[2-6 available in the full members-only article]

7. then there are the good old sports rorts, for which then-Sports Minister Bridget McKenzie took the “fall” but in which the PM was fully aware that money was being pumped into marginal seats as an election tool.

Far from ending the misappropriation of funds or any careers, the above-mentioned sports rorts have brazenly continued, with the latest revelations this week involving funds being funnelled into embattled former Attorney-General Christian Porter's electorate.

Proving once and for all that using tax-payer money to benefit your own ends is rewarded within the Coalition, McKenzie has returned, triumphant, to the Ministry, likely helped in her reinstatement by that other slippery old hand, the newly recycled Deputy PM Barnaby Joyce.

Scott Morrison has, of course, overseen all of the above, defended each and every case and refused to be held accountable, and he still leads this Government.

Indeed, he has, in fact, embraced the concept as described by the president of one of the sports rorts' beneficiaries, Applecross club president, Paul Miller:

The Coalition, then, see this as a perfectly legitimate electioneering strategy and, as former Federal Liberal Party Leader John Hewson recently opined, their new slogan could be:

There could scarcely be a more fitting precursor to the complete annihilation of democracy and abuse of power which this Government has, under each iteration (Abbott/Turnbull/Morrison), managed to unleash on the Australian people. It is indeed significant that the last time any attempt at governance for the majority, as opposed to targeted assistance for Coalition voters, coincided with The Hunger Games.

Perhaps Simon Birmingham, reprehensibly blasé about his Government’s rorting though he is, might be right after all: the voters had their chance.

What hope do we have for good responsible government when Finance Minister actually defends blatant pork barrelling-no integrity, no merit, no accountability- just what they perceive it takes to win government. New slogan - we’ll be as corrupt as we need to be

Pork-barrelling drought funding: A new low for the Morrison Government

The Morrison Government is promising funds for drought relief, but a closer look reveals a severe case of economic mismanagement.