The announcement of extensions to the COVID-19 supplement payments comes with the usual fine print we expect from the Government, writes Tarric Brooker.

IN THE ALMOST two years since the Morrison Government came to power, it has gained a reputation for making grand promises but often failing to deliver with the pledged funding and making policy announcements where the truth lies in the fine print rather than in the headline.

From the drought relief payments towards the beginning of the Morrison Prime Ministership to the recent pledge of over $70 billion in infrastructure spending (of which over 90 per cent likely won’t start until 2022), many would say the Morrison Government’s lack of delivery was an understatement.

But amidst the fanfare of tens of billions of dollars in stimulus programs, one rather important change passed through without much controversy.

When the Morrison Government first announced the creation of the $550 per fortnight JobSeeker coronavirus supplement payment back in March, it was slated to begin on 27 April and be paid for six months, concluding on 27 October.

Except it actually won’t. It will only run for five months, not the initially promised six.

This rather significant issue was brought to light by Greens Senator Rachel Siewert during a hearing of the Senate Select Committee on COVID-19 back in May, during which Senator Siewert pointed out that the earlier-than-expected end of the coronavirus supplement would leave recipients $1,100 worse off.

Now that the Morrison Government will be extending the coronavirus supplement at a reduced rate until the end of the year, the hit to the bottom line for recipients is reduced, but still costs them $600 for the month of October compared with what was initially promised back in late March.

With approximately 2.19 million Centrelink recipients currently qualifying for the supplement payment, that represents a saving to the Morrison Government of over $1.3 billion.

To put that into perspective, the Morrison Government served more than 370,000 Australians Robodebt notices, totalling a collective $721 million. They were later forced to pay back the funds collected as part of the scheme, but not until after over 2,000 people died after receiving a Robodebt notice from the Government.

By ending the current supplement payment rate one month earlier than initially promised, the Morrison Government will be clawing back almost double the entire revenue the Robodebt scheme created from the people in our nation that can afford to lose that money the least. 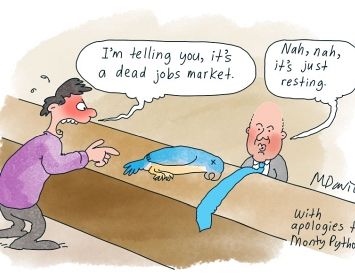 MUNGO MACCALLUM: The future of the COVID-19 economic stimulus

If this isn’t the dreaded second wave of COVID-19, it will do until the real thing comes along.

Meanwhile, there are priests and political staffers who are currently collecting $1,500 per fortnight on JobKeeper despite their jobs never being at risk.

It seems quite mad that the Morrison Government will spend six months giving away billions of dollars in taxpayer money to people and organisations who don’t need it, do nothing about that well-known policy failure, then make up the difference by sneakily moving the goalposts on some of the most vulnerable Australians.

During the Senate Committee hearing during which the effective change in duration was discussed, the issue of “ambiguity” with the facts stated on the Centrelink website was raised.

Up until at least 27 April, the Centrelink website stated that the duration of the supplement payments was “up to six months”, as you can see from the screenshot below.

In early June the website was finally updated with the Morrison Government’s intended end date of 24 September.

With speculation from Liberal MPs that the JobKeeper program could potentially run until the next election, the divide between those who “get a go” and those who don’t seems wider than ever.

All that being said, is anyone really all that surprised? That the Government who refuses to apologise for the disastrous Robodebt scheme and underspent $4.6 billion on the National Disability Insurance Scheme (NDIS) would once again try to find a way to save money in this way?

The Morrison Government choosing to extend the coronavirus supplement payments, albeit at a reduced rate, is a step in the right direction. But ultimately, the fact they chose to needlessly go back on a promise in this way in a time of crisis shows they have learned little from these past few months and that underneath the ongoing stimulus their ideology remains the same.