THE MORRISON GOVERNMENT'S run of ministerial scandals, blunders and absences has pushed its disastrous economic performance further away from the front pages than ever. The pandemic has had the same effect.

Debt data for 2020 was released for all developed member countries of the Organisation for Economic Cooperation and Development (OECD). Australia has tumbled further down the global rankings.

That compares with $161.3 billion left by Labor in 2013. Thus, the Department of Finance projects the Coalition will have more than quadrupled Labor’s net debt by mid-year. And more than quintupled it next year. 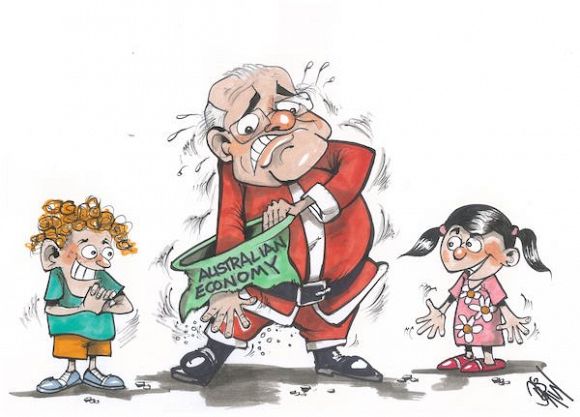 Morrison Government breaks debt records in December — along with promises

Australia’s government debt and the interest on that debt keep rising, despite Coalition denials. Alan Austin updates the record.

Last Friday, Treasury reported gross debt at $815.6 billion, slightly down from the all-time high of $821.2 billion the Friday before. This is the amount on which Treasury must pay interest. This is also the measure which Opposition leader Tony Abbott used in 2013 to belt the Rudd Government about the ears.

The debt did not exceed $300 billion under Labor. At the time of the 2013 Election, it was just $271.7 billion. But it rocketed past $300 billion six months after Abbott became Prime Minister.

The Coalition has now added a staggering $543.9 billion to the gross debt – more than half a trillion – after promising to reduce it dramatically.

Using ABS population numbers, current gross debt comes to $31,744 per man, woman and child. That’s up from just $11,700 when this Government took office.

Future generations must pay interest on that for their entire working lives, unless it is somehow repaid.

According to the Department of Finance, interest on the debt this financial year will be $17,051 million. That’s $46.7 million every day. That quantum is not available to assist Australians who are sick, jobless, homeless or disabled or to help people in poorer countries in even greater need.

Australia now ranks a dismal 17th in the OECD on debt accumulated relative to gross domestic product (GDP). With borrowings at 60.4% of GDP, Australia has joined the middle-ranking nations with debt above 50%.

This is an appalling collapse from Australia’s high ranking over most of the post-war period. Under Labor, from late 2007 to September 2013, Australia’s debt was among the developed world’s lowest. Using the data sets of both Trading Economics and Statista, Australia’s gross debt in December 2012 – at the end of Labor’s last full year – ranked fifth-lowest in the OECD.

The latest data for 2020 allows us to compare changes in debt across the OECD. Seven countries have reduced their gross debt over the period from December 2012 to December 2020. They are Ireland, Iceland, Denmark, Germany, Netherlands, Czech Republic and Hungary.

Another twelve countries increased their debt by less than 10% of GDP. Nine deepened their debt by between 10% and 30%. Only nine have blown out their debt by more than 30%,  including Australia, with a disastrous 32.9% expansion.

The seven countries which reduced their debt over the last eight years did so despite needing more borrowings in 2020 to manage the downturn caused by the COVID-19 pandemic. Australia should not only have been in that group: it should have been at the top of that group.

None of those countries has experienced the boom in export demand and the extraordinary surge in commodity prices which Australia has enjoyed. As IA has shown, Australia recorded the strongest growth in total exports of all OECD economies between 2016 and 2019.

Australia’s fate, of course, is that this Coalition Government has not required the big foreign exporters to pay company taxes. This is exacerbated by the Coalition’s refusal to implement any effective payment for resources extracted. It has also engaged in reverse taxation – handing out cash to big corporations which support the Coalition parties – all of it borrowed money.

What about modern monetary theory?

Modern monetary theory (MMT) claims deficits and debt pose no problem to countries with sovereign currencies, as they can never run out of money. While this is obviously correct, problems remain. The first is that budgets framed by both sides of Australian politics still have expenditure heavily constrained by revenue.

Hence, in the real world, that $17 billion paid in interest on the unnecessary debt is not available for other priorities.

The greater problem which MMT does not address is that about three-quarters of the debt this Government currently holds is owed to foreign governments and corporations. The more Australian dollars handed to foreigners, the greater the loss of local ownership of agricultural and other land and assets.