The Morrison Government's handling of the Porter rape allegations has seen a seismic shift in the public mood and people have had enough, writes managing editor Michelle Pini.

SOMETIMES, a big scandal can bring a government down. Occasionally, it’s a series of bad decisions or systemic ineptitude. But every now and then, it is the sum of all these things that is the trigger signifying when the people have had enough.

We have previously discussed how Morrison managed his own ascendancy and why this Coalition Government, sporting a new and more conservative leader, was re-elected.

But none of that seems important now. Because today there has been a seismic shift in the public mood. 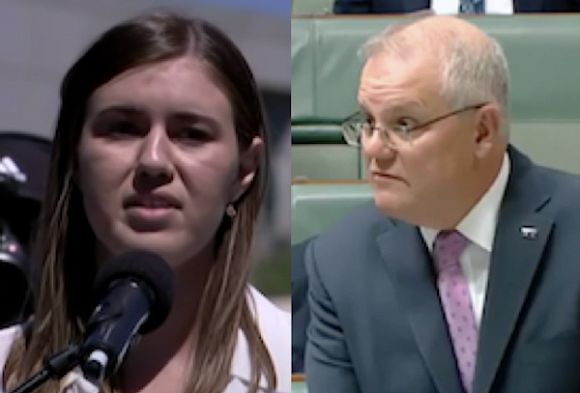 While the nation-wide marches for justice were predominantly about violence for women, like the civil rights protests of the ‘60s and ‘70s, they have come to represent much more.

The protest cry of “enough is enough” demands both an end to violence against women and upon our democracy.

And, as IA reader Ken Dyer reminded us with these words from U.S. Vice President Kamala Harris:

Since 2013, we have witnessed many abuses against women, but also against the poor, the weak and the defenceless by this Coalition Government.

Some of these have appeared small and insignificant, such as former PM Tony Abbott’s many verbal attacks towards women and major policy insults, like appointing himself – a notorious misogynist – as the Minister for Women.

Some have been more covert, such as secret trials for whistleblowers, the undemocratic media searches and the whittling away of press freedoms, and funding cuts for the national broadcaster.

More violent attacks on democracy include those perpetrated against asylum seekers, Indigenous Australians and the general, non-Coalition voter base — such as "sports rorts", Watergate, the aged care debacle and the devastating Robodebt disaster.

During Morrison’s short but scandal-filled rule, the attitude of this Prime Minister and his Cabinet has been to turn their backs on any and all criticism as well as anything which does not further their own agenda.

Prime Minister Morrison repeatedly turns his back on us all, revealing a disdain and obvious contempt for the concerns of the Australian people and anyone who dares to question his authority.

He did so symbolically by exiting stage-Right to go on holiday in Hawaii while the nation burned.

The PM turns his back physically and repeatedly on the Parliamentary Opposition during Question Time.

He does this during media conferences by refusing to answer incriminating questions.

And Morrison turned his back on women yesterday by refusing to venture out of his hidey-hole to face their concerns, choosing instead to dog-whistle about what happens in other, less democratic countries, where protesters are “met with bullets”.

This was a double-barrelled shot from the PM.

Firstly, it is Trump-like in approach, intended to fuel anger against the protesters from those in the community who, like Tony Abbott and Christian Porter, prefer to have the little women at home, ironing their shirts.

And it is also menacing — its underlying message employing, as Dr Jennifer Wilson explained, the language of abusers. It says to women, effectively, You’re lucky we don’t shoot you.

Scott Morrison, declares it "a triumph of democracy" that we did not get "met with bullets" at the March For Justice today. 🤯#March4Justice #MarchForJustice #auspol pic.twitter.com/SRiJdAtVJg

Finally, Morrison does so by his actions when he repeatedly covers up serious abuses of power by his ministers, denying, deflecting, spinning the facts and appealing to his supporter base.

And until now, this strategy has worked in his favour.

The problem is, though, that in the case of Brittany Higgins, we know there was a rapist in Parliament House. What we don’t know is what the Government has done about bringing him to justice or to ensure this appalling crime isn’t repeated in our Parliament.

In the case of Attorney-General Christian Porter, we know he is the subject of rape allegations. We know the victim is now dead. What we don’t know is if there is any substance to the allegations.

In this instance, however, it is what we do know that is the problem for the Government:

And this time, these concerns are bi-partisan. Because violence against women affects us all, both male and female, regardless of political preference. It devastates victims as well as their families and friends. This fact, consistently ignored by our Government's inaction, is indicative of what has become acceptable in our democracy.

And the people now believe enough really is enough.

The fallout against the Federal Government’s persistent failure to deal with all of these issues is – if you believe Newspoll has improved its data collation – finally also being indicated in the polls.

The tide of opposition to this Government can be seen in the WA Election result, where Labor didn’t just win, they effectively destroyed their Liberal Party Opposition in a historic landslide.

The reverberations were felt as far as Victoria, where the current Liberal Opposition, despite a sustained smear campaign against Premier Daniel Andrews, seems to get more irrelevant with each passing week. This week saw a leadership spill, in which the current Liberal Leader Michael O'Brien held on to his spot, for now.

The mainstream media publicity machine, meanwhile, has been in overdrive, downplaying Labor's win. In the News Corp press, the protests, which saw tens of thousands demand change, have already all but disappeared from their pages.

The Prime Minister went about his usual spin routine and actually took credit for Labor's win, claiming he had "bankrolled" the state during the pandemic.

But perhaps, on the subject of rapes in Parliament, the mainstream media's influence is no longer as profound. Because "the status of women is the status of democracy". And today, the seismic swing in the public mood is a huge win for democracy, and it's not going away, “big swinging dicks" notwithstanding.

The PM is right, it is great to be part of a liberal democracy, where protesters are not met with bullets; nor do we cut the hands off thieves, or guillotine corrupt politicians.