Rocky Dabscheck tunes in as Donald Trump reveals in an exclusive radio interview his plans to "Make America great again".

FEMALE JOURNALIST: We are very fortunate to have in our studio here at CBS, Republican presidential nominee Donald Trump.

JOURNALIST: Okay, then Donald. I believe you finally will disclose exclusively on our show tonight, how you are going to make America great again.

TRUMP: Yes I will Tracy. You don’t mind me calling you Tracy, do you?

JOURNALIST: Actually I do. It’s not my name. I’m Lauren. You can call me Lauren.

TRUMP: Lauren. I love that name. Let me state at the very beginning, Lauren, that I love women. In fact, I love as many of them as I can. 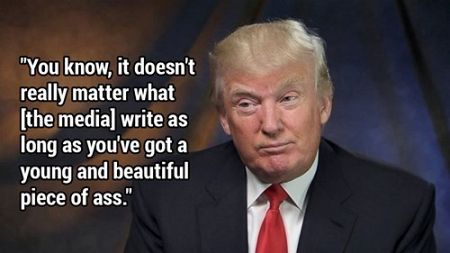 JOURNALIST: If we can get straight to the matter at hand. The plan you intend to implement to make America great again?

TRUMP: Speaking about implants. Are yours real, or are they implants? With a great set like that you’ll be a winner at Flushing Meadows or Wimbledon.

TRUMP: Oh. OK Lauren. My plan is simple, effective and foolproof. I’m worth billions and billions and most of it, actually, is other people’s money. By the way, an attractive young thing like you could do a lot worse than to end up with a sugar daddy like me.

Anyway. I’m loaded. If we weren’t on national TV I’d say I’m fucking loaded. I’m so rich I don’t know what to do with it half the time. That’s why I decided to run for the presidency. Costs a fucking fortune. Great tax dodge and if I’m good at anything, I‘m good at dodging taxes. Declare my campaign costs as a loss and I’ll be able to buy the White House, knock it down and build a politically themed casino — with a high-end brothel on the side.

JOURNALIST: But Donald, you can’t do that.

TRUMP: Why not? We’re on the way out. China and Russia are on the way up. Let’s join the Philippines and separate from the American sphere of influence and link up with China and Russia. Love Putin. Great golf buddy of mine and as for the Chinese Premier, I’ll name a Mahjong room after him in one of my casinos and that’ll win him over.

JOURNALIST: But we can’t separate from America. We are America. 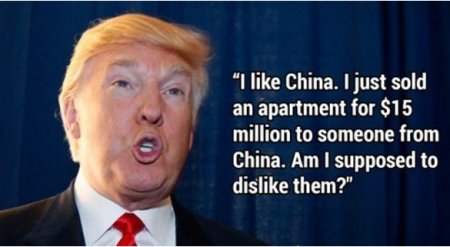 TRUMP: My first wife said I’d never be able to separate from her. Well, I left her and linked up with a Russian. Haven’t looked back since. By the way, I’m normally a tits man but you have great legs.

JOURNALIST: Your economic plan sounds a bit flimsy. We need more than that if you expect us to vote for you.

TRUMP: Of course there’s more. If any nation disagrees with us – except for Russia or China, of course – we bomb the crap out of them. Turn their cities into piles of rubble, then charge them a fortune for our companies (many of them mine) to rebuild their devastated cities. Imagine it. A Trump Casino, Trump Tower and Trump Golf Course in every city in the Middle East, Latin America and Africa within a decade.

JOURNALIST: We already do that Donald, except for the bit about Trump. I think Dick Cheney may have something to say about that last bit.

Before we close, how do you feel about claims that you’re a racist?

JOURNALIST: I think we have enough. Thank you for your time and good luck.

TRUMP: A pleasure Lauren. Speaking of time. If I can have three minutes of your time after the show. You can see I don’t have much self control — three minutes should be all I’ll need.

'The things I allegedly said yesterday, I totally deny. Not true. Wasn’t me. Wasn’t there. Ask Alec Baldwin what he was doing last night.'

Rocky Dabscheck is a musician and author of Stoney Broke and The Hi-Spenders.

It's no laughing matter. Subscribe to IA for just $5.