In what has been described as


“…one of the most dishonest, self-interested fear campaigns … [ever] seen in Australian politics,”

Opposition Leader Tony Abbott last night blamed the mothballing of the Olympic Dam uranium mine expansion on the mining and carbon taxes, before throwing in “industrial militancy” for ideological good measure.

In an excruciating interview on ABC 7.30, in which Abbott attempted to stick to his predetermined script, Leigh Sales’ unexpectedly direct questioning drew him unstuck.

In a telling moment, Abbott admitted to not having read the reasons for BHP making their decision, but dismissed that fact as irrelevant, emphasising the impact of the carbon and mining taxes — despite the mining tax only being levied on coal and iron ore mines.

To paraphrase The Opposition Leader’s icon:


“We will decide the reasons businesses make their internal commercial decisions and the manner in which they make them.”

For the record, the reasons offered by the Opposition Leader are in stark contrast to those given by BHP boss Marius Kloppers for the decision.

From a report in the Sydney Morning Herald this morning:

The attacks were not supported by Mr Kloppers, who stressed that the Federal and South Australian governments had given ''absolutely fantastic'' support to the Olympic Dam proposal in recent years.

The elephant in the room was, obviously, the fact that the nuclear industry is in crisis mode in the wake of the radioactive catastrophe at Fukushima last year, causing Japan to have no operating nuclear plants at present and Germany to make the decision to shut down all its nuclear plants by 2020. In light of that, it is perfectly reasonable for BHP to put this project in abeyance until it can be sure there will be a market for uranium — after they spend $30 billion to dig the biggest pit in human history.

One thing BHP, regrettably, is unlikely to have considered is the fact that the Olympic Dam mine expansion was always a rather dicey proposition — facing immense and concerted opposition from Indigenous and environmental groups.

This is because, firstly, there is significant evidence that the native title process entered into with Indigenous groups was flawed, perhaps even fraudulent (something IA is currently investigating).

In addition, as IA reported last year, Olympic Dam is an environmental catastrophe waiting to happen, due to inadequate safeguards for the immense amount of exposed radioactive tailings that will be left lying around after BHP removes an unprecedented amount of overburden to get to the ore.

The following is the Independent Australia report by environment editor Sandi Keane, originally published on 18 October 2011, in which she discusses the disturbing health and environmental implications of the Olympic Dam expansion.

These are the two take-home messages that will haunt you after watching David Bradbury’s new shocker, Wake Up. Filmmaker, Bradbury, is lauded by critics for his superbly made documentaries. With five AFI awards, two Academy Award nominations and countless international film festival prizes under his belt, the horrific consequences of BHP Billiton’s Olympic Dam expansion is told in chilling, graphic detail. Invest 12 minutes of your children’s future and watch it.

It is likely that October 11 will be judged a more significant date on the environment calendar than October 12, the day the Federal Government’s carbon tax (Clean Energy Bill) passed through the lower house. For different reasons. The 12th will be hailed as a red letter day for the planet, the 11th an environmental cock-up of monumental proportions, whose toxic legacy will take decades to unfold — just like Chernobyl did and Fukushima will. A blight on our health for thousands of years to come.

Both delivered by the same government within the space of 2 days.

The Federal Government’s crucial environmental approval of the expansion of BHP Billiton’s Olympic Dam uranium mine at Roxby Downs was cynically announced on the eve of the historic Clean Energy Bill’s vote in the lower house — with good reason. To bury it. Last week’s reported sighting of Premier, Mike Rann, in Canberra at the Federal government’s tax summit, signalled a fast-track decision by the Environment Minister was in the wings. A week later, Premier Mike Rann signed the agreement with BHP just days before departing politics on 20thOctober.

Rushed isn’t the word for this disgraceful lack of process. For what? So Premier Rann can have his name on a piece of paper and a plaque at the site? Or be catapaulted into the lucrative world of the “pale, male and stale” brigade of political retirees on multinational mining boards?

Here’s a quick primer to help get your head around the monster that is about to be unleashed:

This mountain range of radioactive and carcinogenic tailings is a ticking time bomb just waiting for the next dust storm.

Remember those dust storms that swept across the east coast of Australia just two years ago? Just imagine the dust storms of the future, this time carrying deadly radioactive particles.


Environment Minister Tony Burke has hastily approved the expansion under the Environment Protection and Biodiversity Conservation Act and claimed the conditions placed on the Olympic Dam expansion will be “world’s best practice”.

Environmental conditions at the Ranger uranium mine in the NT are far tougher. Energy Resources of Australia (ERA) is required to backfill the mining waste in the hole, cap it and revegetate it.

Whereas BHP’s responsibility ends 10 years after the mine is closed, ERA’s licence demands that the radioactive tailings be physically isolated from the environment for at least 10,000 years.

This was to address the public health impacts of having tens of millions of tonnes of carcinogenic powder blowing around thecountryside.

BHP’s radioactive tailings will supposedly be capped with a “crust” of harmless pulverized rock. But not for the life of the mine, which will be about 30 years. Even then, being open to the elements, it will eventually break down.

Until then, for the next 30 years, radioactive dust will be free to blow around the countryside. Leached radioactivity will leak into underground water. The massive cost to our health, environment and economy will be ours, not BHP’s. That’s how it works in the nuclear world. No private corporation can afford the cost of nuclear clean ups. Just ask Tepco.

BHP are building a desalination plant in the Spencer Gulf, but it's feared that the salinity will impact on the prawn industry and the spawning ground of the Giant Cuttlefish.

In spite of the desalination plant, the SA government has agreed to continue giving BHP access to 42 million litres daily from the Great Artesian Basin — water it doesn’t require. The basin is already under serious threat. Levels are failing and there are renewed calls for Federal control of the world’s largest natural water basin.

How has it come to this?

Twenty years ago, the SA Liberal Government passed what was then highly controversial legislation to give BHP unfettered access to our resources. Under the Roxby Downs Indenture Ratification Act 1982, BHP was given legal authority to override important state legislation, including the:


Future state governments have lacked the political will to repeal the Act but it is currently the subject of negotiations between the SA Government and BHP Billiton. We expect amendments will be introduced into parliament extending the operation of the Act. The latest news is that an extra week of parliamentary sittings could be scheduled to pass this legislation by Christmas. The Greens are likely to try again for much tougher amendments, though they have not succeeded so far. Today they called for a Parliamentary Inquiry to allow BHP officials to answer questions directly from MPs for the first time.

Despite this, it will take a miracle will turn this decision around.

It is worth noting that BHP Billiton is now 40 per cent foreign owned.

It is also worth noting that 70 per cent of Australian resources are now foreign owned.

Australia is the only country in the world which has given its uranium, iron ore, bauxite, coal, gas, and other minerals and hydrocarbons away for a song to predominantly foreign investors.

The only notable attempt to “buy back the farm” was by the Whitlam government. The current Federal Labor Government has been crucified by the opposition for trying to return a fairer proportion of the profits from Australia’s resources to its rightful owners, the Australian people, through a modest mining tax.

How galling it is for Australians to see a small country like Norway, with just 5 million people, use the revenue from its resources to set up a national fund that guarantees a revenue stream long after its non-renewable resources have gone.

To echo Bradbury’s words, we need to wake up. It’s too late to stop environmental approval by the Federal Government, but there is still time to lobby the SA government to repeal this lawless Act or at least, mine the gold, copper and silver but leave the uranium in the ground. Such is the advice of Monash University’s Dr Gavin Mudd, who has come up with a peer-reviewed model which excludes uranium, is safer and also uses less water and energy.

BHP Billiton's board will make a final decision on whether to proceed by Easter next year. Some shareholders have become active bloggers in the hope that their views will be counted. 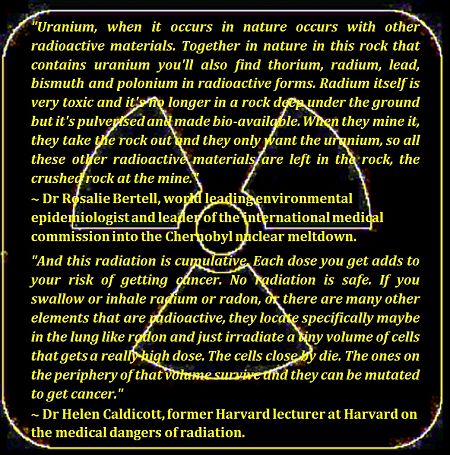