After gaining a majority in Queensland, Labor needs to work out what it is going to do with it — but this is a minor headache compared to the LNP's post-election migraine. Dr Lee Duffield reports. 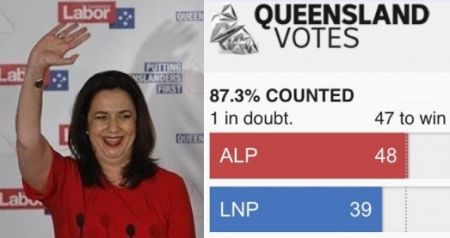 LABOR has moved from minority status to holding 48 of the 93 seats in the Queensland parliament after counting on Thursday finally settled some previously-undecided seats.

The Government of Premier Annastacia Palaszczuk may now apply her two seat majority to try new initiatives and attack some festering issues left unresolved during the years it had to bargain with “third parties” every step of the way.

For some days of counting, Labor had been allocated 47 seats, the barest majority, then this week’s late run of counting gave it number 48 — the very close-run seat of Townsville.

That was according the ABC’s election computer and several others, based on official Electoral Commission numbers, now fast running out since the tallying of votes began on election night, the 25 November.

The Greens win in the Brisbane electorate of Maiwar was confirmed, its candidate Michael Berkman, described on the Greens website an 'environmental lawyer and scientist', seeing off incumbent Liberal National Party (LNP) frontbencher Scott Emerson and edging out Labor’s Ali King.

It’s the Greens’ first seat won by election in the Queensland legislature, although the same part of Brisbane includes much of the former seat of Indooroopilly, held for the Greens by a defector from Labor, Ronan Lee, for a year up to 2009, when he was defeated at elections.

A third late call in the protracted Queensland count was the rural electorate of Hinchinbrook, now claimed by Nick Dametto for the Katter’s Australia Party (KAP), firmly expected to end up with three members in the house. Early on Friday, Hinchinbrook was still classed by ABC as “ahead” not a “gain” for KAP.

A 7.6% swing AGAINST the #LNP in #QLDVotes delivers 48 seat majority to Labor.

JOBS FOR THE NEW GOVERNMENT

In the wash-up, Labor will have the capability of taking some strong legislative action if it has the vision and cohesiveness for doing that.

Put another way, it will no longer have the perverse “luxury” of doing nothing much and maintaining a low profile.

Tree clearing on agricultural lands has been a fiercely-fought battle in  Queensland since large-scale clearing operations became an environmental concern among voters in all areas of the state – urban and rural – by 1980.

The battlelines have been clear: The Beattie and Bligh Labor governments implemented legislation that brought about a substantial reduction in operations over a ten-year period. Then came the radical conservative LNP Government under Campbell Newman (2011-14), which trashed the Labor laws and greenlighted a fresh wave of removal of native and regrowth forest. Premier Palaszczuk, since 2014, has been blocked from doing anything about it by the Opposition and the “Katter boys” (KAP) — bush conservatives with links to the cattle industry.

Using the numbers to settle debate on the vexed issue of the Adani coal mine proposal and projected growth of mining in its region, the Galilee basin, will be more complicated — because this new government will have to work out what it thinks it should use the number for.

On one hand is the demand for continued mining development with associated economic growth for regional Queensland; on the other hand, opposition based on the destructive environmental impacts, weak outlook for funding and shaky reputation of the Indian company behind it.

Those two positions are being vigorously supported within the Labor Party. In Government, it has been attempting a somewhat “arms length” approach, allowing development applications to go through once proved-up — but the time is fast approaching when the mine either has to be pushed through or pushed out.

Such problems for Labor have become a minor tension headache compared with the massive migraine now being suffered by Queensland's LNP Opposition.

Labor could celebrate its overall gains against determined challenges from the rightwing.

LNP members by contrast have been jockeying around, expecting a leadership spill against the party leader, Tim Nicholls. At least two prospective replacements were being mentioned this week — one bush (National) and one town (Liberal).

Looking at possible implications for a Federal election, the figures in Queensland, if repeated, would see the Turnbull Government losing seats.

Pauline Hanson’s One Nation party on the radical right got pockets of substantial support, indicating continued prospects for Senate seats. It polled around 20% in Townsville and captured one Labor seat, Mirani, based on sugar cane farms, coal mines and some beach retirement clusters around Mackay in Central Queensland.

MEDIA COVERAGE — NOT A GOOD LOOK

One aspect of the One Nation exercise this time was the treatment of it by mainstream media as a fully-fledged third major party.

For example, in the lavishing of air-time by the Sky pay-TV network, it was given it equal billing with the two major party leaders in the only televised debate of the election campaign. Also for example, one laughable ABC interview about Townsville with a commentator from the local university was cast entirely in terms of a fight between One Nation and the LNP. Slightest knowledge of the regional electoral history would command that the Labor Party, which held and held on to all three Townsville electorates, needed to be included in the calculations.

Possibly, journalists hoped to do some disingenuous feeding off the accident and conflict prone One Nation to generate sales-worthy news stories. Also possible was that the loaded coverage reflected just uncritical dim-wittedness among unschooled “political” reporters.

Betting on an outsider party with not even two or three seats is tricky and with the actual 2017 election outcome now in front of us, it looks bad for most of the media outlets. After getting it that wrong it is time for some media personnel to enrol in POL101 — get themselves a bit savvy about this politics business.

As it happened, Labor won anyway and the Greens party, ignored by media as strongly as One Nation was over-exposed, didn’t worry about the mass media and just did their own very effective door-to-door campaigning “at the grass roots”.

First we “did a Northcote” in Victoria. Now we’ve “done a Maiwar” in Queensland. What an amazing few weeks we’ve had! I couldn’t be happier #auspol #qldvotes https://t.co/m1LvjkaxId