QUEENSLAND ELECTION: Tote bags, turnarounds and the Adani mine

To understand the Queensland election, so far, is to see it as a tale of two versions of Labor, writes Dr Binoy Kampmark, from Townsville.

THE VOLUNTEER doorknocker tentatively presses the bell with a pudgy finger. Coming to the door, a round, full character greets you — one sporting the colour red. Not the red of socialism, so much, as the red of Australian Labor — a different hue, not to mention implication.

The local member seeking re-election for the Queensland Legislative Assembly on 25 November is Coralee O’Rourke, Member for Mundingburra and Minister for Disability Services, Seniors and Minister Assisting the Premier on North Queensland.

The Australian political volunteer is a gift from heaven to political cadres, who milk them to the point of starvation and nervous breakdown. “What do you want us to do?” comes the coy question. The plaintiff query from the tote bag carrying volunteer strikes an uncomfortable chord.

This is a local parliamentarian, she says pleadingly, who “wears many hats”, a true creature of talents. But she does not want to come across as too confident. Cockiness is eschewed. The member “still has a lot of work to do”.  The note of hope to the future is important: there is more to come, more promises to make and, presumably, to break.

The volunteer mental check-list goes into full swing, her face a visible scribble of considerations and social work concerns. Adani is mentioned and this brings out Labor’s Achilles heel: they wobble and fall, rise and trip, as the occasion demands it.

Historically, the modern Labor party has become a shape-changing expedient, a fashion of climactic unpredictability and assiduously cultivated hypocrisy. Harried by a rising Green vote, but still wishing to be the party of government, erratic behaviour has become the norm.

While the Queensland voter knows, for instance, where the vote might end up with a candidate from One Nation, or one sourced from the Katter Party and even a weak LNP, a vote for Labor is a vote for permanent, unchanging contingency. Adani’s crown rests easily one day, renewables take charge the next. Tree clearing laws are encouraged, only to then be tightened after an outcry.

To understand the Queensland election, so far, is to see it as a tale of two versions of Labor. A joint-statement in October, from O’Rourke and Minister for Agriculture and Rural Economic Development Bill Byrne, outlined the pro-mining side of the Palaszczuk government — a discomforting obsequiousness that has been exploited.

It expressed the unquestionable delight at the announcement by the Indian mining giant that both Rockhampton and Townsville had been shortlisted as fly-in fly-out (FIFO) hubs. 'The rivalry between Townsville and Rockhampton is long-standing,' O’Rourke noted, 'and both Councils have worked with Adani making their case to be a FIFO-hub.' 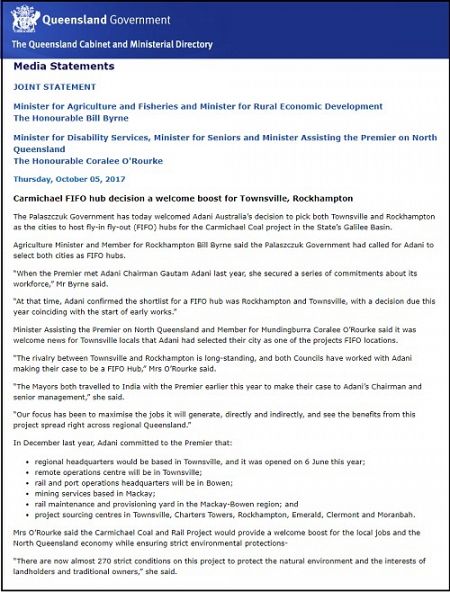 The volunteer, however, is in no mood to be reminded of this. Pilgrims rarely wish to be reminded about the falsehoods of their saints. The focus of this new Labor government is, to that end, different. The tale has changed. The mining aspect is to be lessened. Zen detachment is to be practiced. Emphasis is had, instead, on a range of other supplementing energy sources.

“We are making efforts to make sure that the Queensland electricity grid stabilises over the next few years. We are even building solar energy facilities at Kelso.” The eyes of this nameless volunteer glaze over and before us stands a follower, a programmed machine who has the agenda hammered out from central office in Brisbane.

The inevitable, wasteful tree detritus is offered. “I have some material for you, in case you are interested.” We are not, but that hardly matters. Some rifling takes place through the tote bag. 'Reliable & Affordable Energy' is a note that is shoved into my hands with enthusiasm.

On the back is a list of dizzying figures on how North Queensland will be “powered”. There is much mythmaking and astrological outlay in this. Standing out is a 'proposed hydro-electricity project for the Burdekin' that will have some $236 million thrown at it. Naturally, this act of magic will create 450 as yet non-existent jobs.

Pity, then, that this promise has languished in a state of political fantasy for years.

Last Friday, Queensland Premier Annastacia Palaszczuk had an attack of moral revisionism. Her Government, she claimed, would have “no role in the future” of assessing a proposed $1 billion loan to Adani for its Carmichael coal mine.

From the laboratory of conscience grew a concern that her indirect personal connection with the Indian mining giant might be compromising. Her partner, Shaun Drabsch, had worked on the application to the Northern Australia Infrastructure Facility (NAIF) on behalf of Adani through "Big Four" accountancy firm PricewaterhouseCoopers.

The Premier, however, saw no evident conflict of interest, making the matter a personal one. She complained of the “smear campaign” launched by the Liberal National Party in Canberra.

“This afternoon I announce that my Government has had no role to date in the Federal Government’s assessment process for Adani — now we will have no role in the future.”

here was, naturally, nothing of the sort. The conflict of interest between the Queensland Labor Government and Adani has been an ongoing one, normalised by machine politics promises by Gautam Adani to bolster operations in Townsville, Bowen, and Mackay. But the premier is worried. The estrangement between mining monomania on the one hand and environmental concerns on the other, has become too obvious.

The enthusiastic volunteer casts another moribund piece of paper our way. “More local health services.” On that score, the Labor government can claim to have done less damage, or certainly reverse the predations of the previous, short-lived government of Campbell Newman.

A more deserving outcome for the Palaszczuk Government will be a forced coalition, or partnership with cross-bench parties that make it govern as opposed to dictate and rule. The very fact that Premier Palaszczuk has ruled out working partnerships with other parties may be a starting point for well-deserved doom.

Dr Binoy Kampmark was a Commonwealth Scholar at Selwyn College, Cambridge and lectures at RMIT University, Melbourne. You can follow Dr Kampmark on Twitter @bkampmark.

Welcome to #Townsville @TimNichollsMP @LNPQLD. While here, how about you apologise to locals for your Cuts, Sackings and Selling! #qldvotes pic.twitter.com/QvDu31w7Fx