As ICAC investigations continue over John Barilaro's appointment to a New York trade job, the former Deputy Premier can now add allegations of assaulting the press to his list of transgressions.

Let's go back to last year when Mr Barilaro – Mr John Barilaro – was interviewed in this exclusive chat on 'The Sun Rises', a podcast written and performed by founder and publisher David Donovan and managing editor Michelle Pini.

EVERYONE IS FIXATED on Mr Barilaro, Mr John Barilaro — join us for your fix. Plus, we cross live to NSW Political Commissioner Mick Fulla…

Mr John Barilaro is my name, and fighting the current plague infestation of koalas, otherwise known as feral tree rats, throughout NSW and wasting the coppers' and the courts' time is-a my game.

ANN ARDASUCKUP: Good morning and welcome to The Sun Rises. My name is Ann Ardasuckup and we have a very exciting show planned for you this morning.

We will shortly be crossing live to an extremely important media conference happening in the Sutherland Shire.

The Sutherland Shire, for those who may not know, is home to our much-loved Prime Minister and host to the world-famous Cronulla Race Riots!

But right next door to the Prime Miniature is, of course, Australia's NSW Political Commissioner and Chief Wheelie Bin Monitor Mick Fulla….

And, if you haven’t ever had the good fortune to visit the lovely Borrowanear Road in the Shire suburb of Woolyheadwear, then it really is not to be missed! 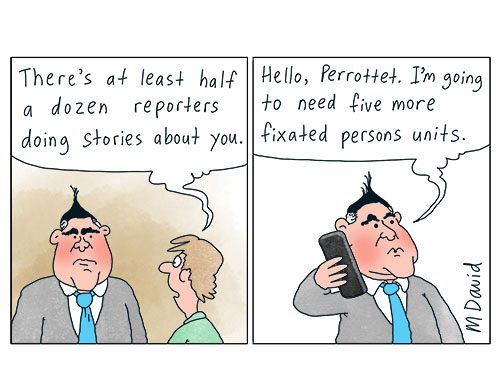 NSW Police Commorrisoner Fulla will be addressing the nation shortly and I, for one, can hardly contain my excitement. It’s brimming over so much it can’t be picked up!

And if that’s not a good enough collection for one fine winter’s morning, joining me in the studio at this very moment is the towering presence of, the Deputy Premier of New South Wales, John Barilaro.

ARDASUCKUP: Oh, I’m so sorry about that. Can someone adjust that microphone? (Clanging and banging) There, that’s about as low as it goes…Let’s try that again! Good morning, Mr John Barilaro. Is that microphone low enough for you now?!

BARILARO: Good morning to you, Ms Ardasuckup. May, I call you Ann?

BARILARO: Excellent Anna, you may call me Mr John Barilaro.

ARDASUCKUP: Oh, yes, indeed. It’s so wonderful to have you in our studio today.

And may I say what a fine job you’re doing, keeping our state safe from all the constant threats of cuddly marsupials falling from trees, and comedians making a mockery of dubious activities and alleged misappropriation of monies, Mr Barilaro?

Here’s clearer footage and details of the John Barilaro incident.

And may I just correct you, there? It’s a-actually, Mr John Barilaro.

BARILARO: That’s right, Angie, Mr John Barilaro is my name, and fighting the current plague infestation of koalas, otherwise known as feral tree rats, throughout NSW and wasting the coppers' and the courts' time is-a my game.

Apologies, Mr John Barilaro, but we’re going to have to cut to our live media conference now, as the NSW Police Commissioner and Bin Monitor Mick Fulla... is about to address the nation.

MICK FULLA...: It’s nice of you all to make your way to green and leafy Woolyheadwear this morning. What a wonderfully white— I mean … bright, sunny day it is. Praise be!

Now, if you’ll allow me to just…

Sorry. excuse me… Oi! You in the boots! Katharine! If you wouldn’t mind standing a few feet away from those camellias, blossom, I think we’d all feel a little bit more … well … rosy. You too, Laura. 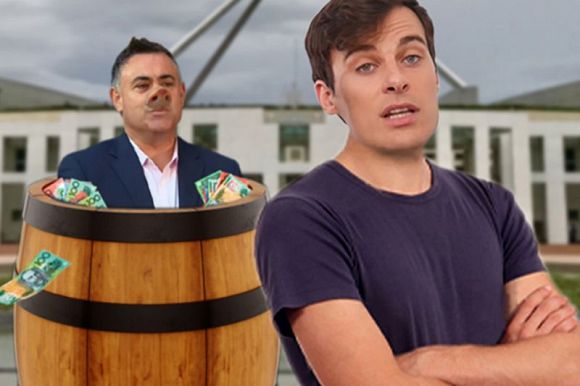 In your own time. I’ve got all day.

Finally! Thank you so much, ladees!

Now, where was I? Oh yes! First, I’m going to make a few opening remarks about the Jordan Shanks Fixated Persons Unit matter, and then open up the lower side patio, front left gazebo and upper lawn area for questions.

Not you, Independent Australia! You just sit there quietly in the compost heap and consider your life choices. Crikey! Talk about gutter journalism.

Anyhoo! Here we all are.

Now, most of you probably only know me as the stern figure at televised press conferences in a neatly starched blue uniform standing behind Liberal Party politicians.

A few others of you might have heard of me as the fellow who puts out Prime Minister Scott Morrison’s wheelie bins. Yes, those ones, Chris. No! Please don’t touch! Thanks. I spent ages last night polishing it...

Now, what you probably don’t know is that not only do I put out Reverend Oracle Morrison’s trash, I also do his edges, mow his lawns and fertilise his award-winning begonias.

Fertilise! Fertilise! I’m sorry, SBS, if you can’t hear me from way down there beside the Japanese garden, then I really can’t help you. 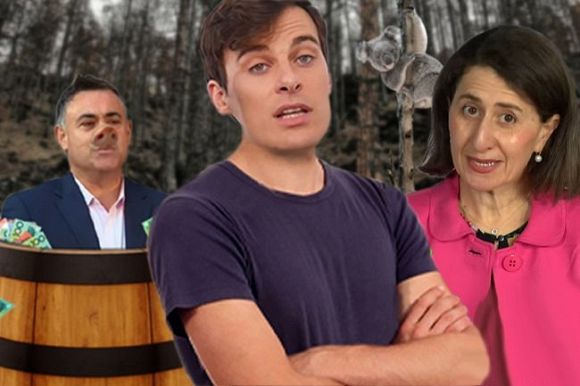 #8 TOP STORY OF 2021: Friendlyjordies, the MSM, ICAC and the demise of Gladys

And if I am not busy enough getting rid of all that trash, I also moonlight as NSW Police Commissionairhead.

Now, in that important role, I would like to update you on some recent activities by the NSW Police Farce, including the arrest of You, Yout, Twoboob video celebrity Jordan Shanks’ sidekick Kristo, against our recent decisions to not investigate former Attorney-General Christian Porter over serious rape allegations... the alleged Parliament House rape by a Liberal staffer of Brittany Higgins and the repeated alleged acts of corruption by good old Suss Gus Taylor.

Now, some of you…

ARDASUCKUP: And... we’re just cutting back now... We’ve just lost the feed there.

So, Mr Barilaro, Mr John Barilaro – I’m afraid that’s all we have time for today. Thank you so much. And thank you, listeners. I’m Ann Ardasuckup and this has been yet another day of The Sun Rises.

BARILARO: See ya later, everybody!