SO, BARNABY “Respect My Privacy!" Joyce has decided that he just wants to be left alone with Channel Seven and their money, and has taken 12 weeks fully paid leave.

Well, that’s fine. We do have freedom of speech in this country, and so Barnaby Joyce MP is welcome to speak to whomever he wants and be paid whatever they will give him for the privilege.

Free speech works both ways, of course, and so IA reserves the right to call him a liar, a dolt, an ignoramus, a boor, a sot, a bully, a lech, a laughing stock and an unmitigated hypocrite. We reserve the right to tell him he shouldn’t come back after just 12 weeks, but should take permanent leave from his position — or, in other words, resign. That he is a disappointment, not only to the unwitting voters of New England, but also to his Party, the Coalition, the Parliament and to an entirely aghast Australian public.

Of course, that is just our opinion, but we have a right to express it. Because that’s how freedom of speech works.

Now, just before, we mentioned hypocrisy and the unwitting voters of New England, so we would like to say a few words about each.

What do you get when you cross a philandering, loud-mouthed retail politician with a former Daily Telegraph government spin doctor? 🤔 https://t.co/z7fgGAkdux
Warning: Pretty cranky in this rant 😜

THE PIGS, THE DOGS AND THE SHEEP

Barnaby Joyce appeared on ABC 7.30 in February and refused to answer questions about his partner Vikki Campion and her pregnancy, citing a desire for privacy. This statement was brought into question just a month later, when he was quoted in the press saying the child’s paternity was a “grey area”. Now we know that privacy itself was not Barnaby’s concern, it was its price. Yes, not only does Barnaby possess all the attributes mentioned above, he is also shallow, insensitive and avaricious.

But it would be remiss of IA to suggest that Joyce’s hypocrisy is unique. Because hypocrisy and its close associate, double standards, are the defining features of Australian public life at the present time. Indeed, they pop up wherever one looks.

For example, while this Government throws the disabled onto NewStart, denies autistic children NDIS and puts former welfare recipients into bankruptcy for ancient fictitious debts, adult babies in the ruling Coalition, such as Barnaby Joyce, are allowed to suckle at the teat of public welfare, and are not only seemingly immune from any retribution, but are actively protected from scrutiny by purportedly “independent” public agencies. 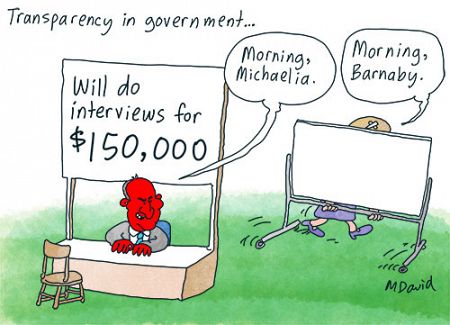 IA columnist Dr Jennifer Wilson expertly summed up the situation in an article yesterday, from which the following is an excerpt:

It was only a matter of time before the Nationals MP and Member for New England decided to turn a profit from his kin after indignant protestations – interestingly enough made when nobody was offering him any money – that his personal life was private and his intention was to protect his infant son from a prurient media. Well, the child is still in need of protection and much of the media still prurient — the only difference now is money.

What is even more worthy of serious consideration, however, is the suite of decisions made by the Independent Parliamentary Expenses Authority’s authorised decision maker, Petra Gartmann, to deny Freedom of Information (FOI) requests made by media organisations on the matter of Joyce and Campion’s travel expenses.

The IPEA’s latest refusal of information, reported in The West Australian on 21 May 2018, is justified by Ms Gartmann on the somewhat baffling grounds that releasing it may

'... endanger the life or physical safety of staff involved or individuals associated.'

Gartmann also claims that revealing the travel expenses of the couple may expose matters of a “personal nature”, despite the travel being for official purposes and funded by the taxpayer.

(You can access the rest of this article HERE.)

The IPEA refuses to release information on Barnaby Joyce's expenses as they are "personal in nature", meanwhile he sells his story to the highest bidder.#FederalICAC #InlandRail #CSG #CORRUPTION #Weatherboard9 #CSG #ShowUsTheDocuments #Auspol
https://t.co/b3d4O7T1rf

Yes, you read that correctly. At least some of those official travel expenses may have been of a personal nature. Most normal people would read that suggestion of a rort as a reason to grant the FOI, but never mind, like almost every other public agency now, the “Independent” Public Expenses Authority is seemingly only there to provide cover for this increasingly shambolic and corrupt government.

This decision reaches the level of perverse when you consider that, in March last year, after receiving negative media coverage about its atrociously administered “robo-debt” scheme, the Federal Government released personal information about some of the people whose debt hardship  stories were revealed by the press in an effort to shame and discredit them. After numerous complaints to the Office of the Information Commissioner (OIAC), that Government agency decided yesterday ‒ after deliberating for more than a year ‒ that it was perfectly right, reasonable and proper for the Government to abuse the privacy of these former welfare recipients for cynical political gain.

You can read the mealy-mouthed statement from the OIAC below:

So, let me get this right.
APEA won't release details of a Government MPs official expenses because that might reveal something "personal in nature".
Meanwhile, the OAIC rule the Government is totally fine to vindictively release the personal details of welfare recipients.
WTAF? pic.twitter.com/fMUijI3xKh

So, it’s one rule for conservative politicians and another for the rest of us.

As George Orwell said in his famous satire:

This is only half the story! The other section of this editorial, 'Breaking Beetroot', originally published as part of the Independent Australia weekly subscribers' newsletter, may be read in the IA members only area. It takes less a minute to subscribe to IA and costs as little as $5 a month, or $50 a year — a tiny sum for superb journalism and loads of extras. IA now has 1,482 subscribers now. Please help us get to 1,500! 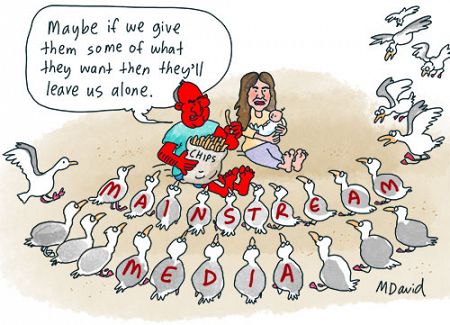