Bob Katter and The World

In the aftermath of the 2013 Federal election, history editor Dr Glenn Davies says it’s time to reflect upon the source of the strong sense of independence Bob Katter draws upon — Charters Towers.

YOU'VE GOT TO TAKE YOUR HAT OFF to Bob Katter, the Independent Federal member for Kennedy — the man with the most famous hat in Australian politics. There’s been a lot of newspaper and digital column space devoted to the maverick politician since 2010, when he and his fellow Independent stopped the nation when deciding which side of politics they would support after the hung Federal election and therefore who would form Government (Katter went with the Coalition, while the other two went with Labor).

Since then, he has created his own political party, strode the national stage, made some monumental gaffes and nearly lost his seat of Kennedy, which has been a Katter family possession (almost continuously) since 1966. However, it is from the ‘hat town’ of Charters Towers from that he draws his inspiration and sense of political independence.


THE KAT IN THE HAT

The north Queensland town of Charters Towers is a deeply conservative and yet strongly independent community. A former gold-mining town southwest of Townsville, it is the capital of the Federal electorate of Kennedy — a dusty, sprawling electorate more than twice the size of Victoria. Even though Katter’s electorate office is in Mount Isa, he has lived most of his life in Charters Towers and is considered a part of the close community. It is the history and people of Charters Towers that inspires and Katter and permits him to act as he does.

The Kennedy electorate spans 568,993 square kilometres — from the Gulf of Carpentaria and Mareeba in the north, to Boulia in the south, and from the Queensland border in the west to the seaboard. It is the biggest electorate in Queensland and the third biggest in Australia. Kennedy is Queensland heartland, a stronghold for beef and agriculture, fishing and mining. Existing since Federation, the seat is named after Edmund Kennedy, an early explorer of Cape York.

The Katter’s have always reminded me of the Phantom. The job is passed down from father to son but the name always remains. Bob Katter followed in the footsteps of his father, Bob Katter Snr, who held the seat for 24 years. Elected to federal parliament in 1966, Bob Katter Snr held the seat of Kennedy for the Country Party and then the National Party until 1990. A highly regarded Coalition politician and minister, Katter Snr had been an ALP supporter before the Labor-split in the 1950s and, in the 1980s, was a leading critic of the ‘Joh-for PM’ campaign. Interestingly, his son Bob Katter Jnr had been a member of Queensland’s one-house parliament, representing the Charters Towers-based seat of Flinders since 1974 where he served as Bjelke-Petersen’s minister for Aboriginal affairs. With his flourishing white hair and trademark R.M. Williams hat, Katter Jr was one of the few state or federal Country/National party politicians respected by Aboriginal clans and their leaders. Katter Snr died of cancer shortly before the 1990 election and his seat was won by the ALP. However, his flamboyant son won it back in 1993.

Bob Katter Jnr was a National Party MP for most of his parliamentary career, until he chose to stand as an Independent in 2001, citing as his reason disenchantment with the National Party’s economic policy. Specifically, he was opposed to the elimination of tariffs and subsidies for agriculture — policies he said were killing the sugar, banana and dairy industries that dominate his electorate. He won in a landslide.

Much of Katter’s electoral success is due to the fact that he articulates and champions the interests of rural industries and of rural employment against a Nationals brand that has, in his opinion, become captive to the philosophies of free trade, economic rationalism, deregulation and corporatisation. He is “old-school” Country Party.

Katter continued to be re-elected as an Independent and in 2010 was one of three Independents elected who, for a few weeks, held the future of the Gillard hung-parliament in their hands. Eventually, he split with the Independents Windsor and Oakeshott and pledged support for Tony Abbott’s Federal Coalition.

On 27 September 2011, Katter's Australian Party (KAP) was registered by the Australian Electoral Commission. In the 2012 Queensland State election, the party won two of the 76 seats it contested, with the Charters Towers-based Shane Knuth holding the seat of Dalrymple and Rob Katter winning Mount Isa. On 25 November 2012, the party was joined by LNP MP Ray Hopper.

The frontier gold town of Charters Towers was one of the major centres of radical republicanism in the colony of Queensland. Settled in 1872, Charters Towers developed into a thriving reef-mining centre. In 1877, with a population approaching 4,000, it was declared a municipality and, by the 1880s, it was one of the major Australian gold reefing fields. The boom of the 1880s, with an extraordinary influx of British capital, involving about five million pounds, had transformed the Queensland economy. The flood of money and employers hungry for profit encouraged the growth of strong trade unions. When relations between employers and workers became strained, the labour movement often blamed the interests of British capital. From here, it was short step for many workers to advocate for a republic and separation.

During its heyday in the 1890s, Charters Towers was the second town of Queensland with a population approaching 30,000. Since the nearest major town, Rockhampton, was a long boat journey away, all the services necessary to civilisation in a very large area of Queensland were concentrated in Charters Towers. It was perhaps this isolation that fostered the nickname “The World”.

My family on my maternal grandfather’s side have lived in Charters Towers since the 1890s, with each generation involved in the gold mining industry. Growing up in Charters Towers in the 1970s and 1980s, my political outlook drew upon my large extended family’s working-class mining heritage and deep personal roots within the gold mining town. In particular, it was my grandfather’s stories of life working the Charters Towers gold mines, and his memories of his father working the goldfield in the 1890s, that moulded the way I saw the world. It was the egalitarianism of the goldfield that seemed to absorb me growing up in Charters Towers. I always had the strong feeling that ‘Jack is as good as his master’. It was obvious that I would approach life with a strong commitment to support the Australian labour movement.

Having grown up in a historic gold mining town with strong family links and heritage foundations, it was natural that I would take up the study of history. In 1988, I wrote my history honours thesis at James Cook University on the history of the 1890s Charters Towers based Australasian Republican Association.

On 3 February 1890, a meeting was held at the Charters Towers School of Arts to form the Australasian Republican Association. Among its leading members were three future Labour members of the Queensland Legislative Assembly, John Dunsford, Charles MacDonald, and the future Labour Premier of the colony, Andrew 'Anderson' Dawson. These three had been part of a radical circle formed around Dunsford’s bookshop which gave Charters Towers residents an opportunity to read works by radical and ‘freethinking’ authors such as Henry George, an advocate of land nationalisation, Tom Paine, author of The Rights of Man, and Karl Marx. The Australasian Republican Association advocated an independent Australian nation and, through this, an idea of what it meant to be Australian that was separate from British greatness.

My republican leanings draw from a time before the “The Bob’s Katter” – an older Charters Towers – a time of miners and working class endeavours. In some ways, Bob Katter and I represent different aspects of the independent history of Charters Towers. Mine draws upon the nineteenth century goldfield independent streak reflected in the emerging union and labour movements and the republican advocacy of the 1890s, while Bob's reflects the grazier class that grew up around the town.

For the first half of the 20th century, Charters Towers was a solid Labor community, but this changed with the 1956 Queensland Labor split that saw the community drift to the conservative side of politics. With the election of Bob Katter Snr, followed by his son, Bob Jnr, Charters Towers had continued to be a community that revelled in its independence. A long-time resident of Charters Towers, Bob Katter personifies the independent stand taken by the town since the 1960s. He reflects the bush feeling of independence from urban dwellers. For them, it is the bush where the real Australia still lives. However, Katter is also drawing upon the strong narrative of an alternate separate northern capital located in Charters Towers and its long story of independence.


WHAT'S THE MATTER WITH KATTER?

At the 7 September 2013 federal poll there was a big swing against Bob Katter in his seat of Kennedy. The LNP reduced Katter’s very safe seat from 18% to that of a marginal and he was forced to rely on preferences from the ALP to not lose his seat. As a result, Katter no longer holds Kennedy with an iron grip. Last election, Katter garnered 39.5% of the primary vote and two-thirds of the two-party preferred vote. On 16 September 2013, Katter was informed by the AEC that he was leading in the count for the seat “by more votes than remain to be counted”.

So, what’s the matter with Katter? Why did he nearly lose his seat in the recent federal election?

Until recently his constituents seemed to love his charisma, energy and frankness. What they seemed to value most about Katter was not whether he delivered on what he promised but his ability to attract attention (for them). Kennedy is diverse country, but its voters are united in their resentment at being ignored. Its population is bigger than the Northern Territory, but Federal Parliament is in far-away Canberra and State Parliament in distant Brisbane. And so Katter, in all his hat-wearing, gun-toting glory, had become an ambassador for the independent political people of Charters Towers and the wider electorate of Kennedy. He reflected north Queenslanders as they liked to see themselves.

Kennedy was thought to be an easy victory for Bob Katter and Katter’s Australian Party (KAP). However, as Katter says an LNP advertising campaign linking him to Labor over preference deals took its toll. The LNP ran the line “a vote for us is a vote for the ALP”. This was certainly a big factor in the voters of the North turning away from Katter. The suggestion of collusion with a big political party went against the grain. The voters of Kennedy had shown for election after election how much they valued the perception if not the reality of independence from the politics of the South. 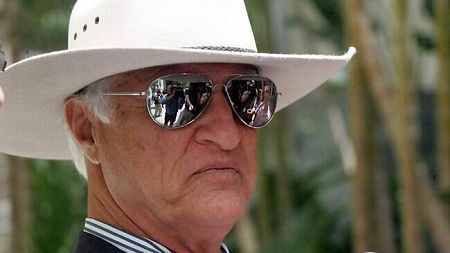 But perhaps a deeper reason for the collapse in support from Charters Towers and the wider Kennedy area was the emergence of KAP itself. Once Katter no longer was just their Katter, tilting at windmills on their behalf, but was rather now riding out across the nation blustering everywhere, the support he once had quickly evaporated. Once he changed from “Our Bob” to “Australia’s Mad Hatter” the well-spring of Charters Towers began to dry up. He was looked upon with suspicion as a Southern collaborator.

These are lessons he will need to reflect upon, otherwise this may well be his last term in office. However, if this was to happen, then it is odds on his son Robbie Katter, State Member for Mt Isa, would don the Phantom costume as the next of the Katter's for Kennedy.