The aimlessness and violence of Australia’s involvement in the Afghanistan War is a sober reminder of the need to re-evaluate Australia’s complicity in U.S.-led wars and the U.S. alliance itself, writes Sam Brennan.

The revelations of the Brereton Report that Australian special forces allegedly killed nearly 40 innocents and committed war crimes in Afghanistan came as little surprise to those who have followed Australian involvement in U.S.-led wars.

As human rights lawyer and activist Kellie Tranter said of the findings: “[People are] disgusted, yes. But no one is shocked, and that’s a problem.”

Australian Defence Force Chief General Angus Campbell blamed military culture for the crimes and said the ADF is being “held to account”.

However, Campbell did not – nor any prominent military or government official – point out that the only way to permanently prevent Australia troops from continuing to commit war crimes is to not be at war.

Why are we there?

Despite the findings of the report, few are asking the question — why we are in Afghanistan?

The reason given for Australia’s longest military engagement has always been convoluted, however, Campbell offered the basic argument in saying:

“Australia needed to deny al Qaeda a base of operation and prevent the Taliban from running the country.”

Whether Australia “needed” to do anything in a country nearly 10,000 kilometres away with which we had little to no interaction is debatable. But even on Campbell’s own terms, there is currently no reason to be in Afghanistan.

The first concern, denying al Qaeda a base of operations, could have been accomplished within two weeks into the war when the Taliban offered to give up their unwelcome guest, Osama bin Laden — an offer they reportedly made before 9/11 as well. Despite this, within six months, al Qaeda leaders in Afghanistan had largely fled or been killed.

The U.S. and its allies pushed al Qaeda out of Afghanistan, but – in an almost Faustian pact – by doing so, allowed for al Qaeda to form significantly stronger bases elsewhere. This led to an organisation as powerful now as it was when war was declared, if not more so.

The second goal, to create a liberal democracy in Kabul while denying the Taliban any role in governing, is also a failure. The idea that an invading force could culturally engineer a country through the barrel of a gun was always flawed. However, the U.S.-backed government of Afghanistan, plagued by corruption and often just as bloody as the Taliban, is not likely to be able to govern the country if the U.S. leaves.

This has been widely accepted for years and with the Taliban currently in peace talks that will most likely see it return to governance in some capacity, it begs the question of why Australian troops are there.

The answer is a lot simpler and more disturbing than what Campbell posits — we are there because the U.S. is there. 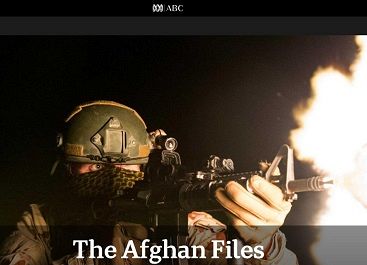 Leaked secret defence force documents give a chilling insight into the corruption wrought on individuals by endless war.

Every prime minister since the Afghanistan invasion began has supported the war, not because it was winnable – as Wikileaks showed, with Kevin Rudd telling a U.S. congressional delegation “Afghanistan scares the hell out of me,” while calling nation-building efforts like the Afghan National Police a “train wreck” – but because the U.S. remained.

This applies to a great many Australian foreign and even domestic policies. Why have we not supported the U.N. Treaty on the Prohibition of Nuclear Weapons? Why is a foreign spy agency operating on our soil? Why is Australia engaged in increasingly damaging diplomatic tit-for-tats with our largest trading partner? Because it is U.S. policy.

Vince Scappatura, in his work ‘The U.S. Lobby and Australian Defence Policy’, documents the largely overlooked influence of U.S. lobby groups in Australia. Organisations such as the Australian American Leadership Dialogue (AALD) act as gatekeepers and reinforce a dogmatically pro-U.S. ideology in political and journalistic elites. Voices that criticise the U.S. alliance and draw attention to the issues it raises are sidelined.

The bipartisan deference to the U.S. over the Australian people is shown in Afghanistan with the majority of Australians wanting a full withdrawal as far back as 2008.

The subordination of the Australian people on this issue – and many others that conflict with U.S. interests – have led to a point where two-thirds of Australians have a poor opinion of the U.S. and only a quarter of young Australians think the alliance is very important for security.

Yet despite this, both major political parties' approaches are little more than platitudes about “common democratic values” or “cultural similarities” – surely not referring to the same culture that results in military forces committing war crimes – while ignoring the public opinion in favour of a more independent relationship.

Faced with reluctance from those in power, the interests of the Australian people and – as the Brereton Report reminds us – the untold damage to the victims of U.S.-led wars, the People’s Inquiry exploring the case for a peaceful and independent Australia will launch Thursday 26 November at 7 PM AEST, organised by the Independent and Peaceful Australia Network.

While the Afghanistan War exemplifies what happens when Australia engages in lockstep uncritical adherence to the U.S., examples are far-reaching, impacting First Nations peoples to workers' rights.

To properly contextualise and challenge the current state of this alliance, we are taking submissions and want to hear from you. To find out more about the areas the inquiry will be covering and how to make your submission, visit the website.