7 ways to make millions with the Morrison Government

While this Coalition Government is at the helm, debts and deficits are no longer regarded as disasters, and money seems not an issue — as long as you know how to play the game.

In fact, unlike when these words were applied to its Labor predecessors – dominating the news cycle for years and ensuring the return of self-exalted “best economic managers” as represented by the Coalition – debts and deficits are now defunct.

In part, this is due to the pandemic, which has proved a handy tool by which to excuse all manner of bad economic management. However, given that the debt had doubled well ahead of any COVID-19 Petrie dish cultures, this alone cannot explain the phenomenon.

The reason this Morrison Government can do whatever it likes with our money is simple: it knows how to manipulate the narrative. And it knows which side of the electric force it needs to harness — the alternating currents directed by fossil fuels and media magnates, of course.

Because these sources of unlimited political power must be safeguarded at all costs.

One of the ways in which the Coalition protects this power base is to ensure it directs as many government-funded opportunities and resources, such as grants, subsidies, relief packages and other assistance to those that best support its existence.

This is the secret, not only of how to gain power in Australia but of how to maintain it — certainly in recent years. It’s about knowing how to play the power game.

To illustrate how this electrically-generated gravy train can be accessed by savvy businesses and individuals, we have prepared an easy how-to guide, outlining how you may benefit.

1. DONATE TO THE LIBERAL AND NATIONAL PARTIES

This is self-explanatory. In order to generate power, you need to attract energy and the political machine is powered by the energy of money.

Firstly, this is the first rule of attraction: you can't be too eager. Also, it is such an unnecessary inconvenience.

Delta Electricity (owner of the Vale Point Power Station) and Shine Energy – the lucky recipients of $8.7 million and $4 million in government grants, respectively – did not need to bother with applications. These fossil fuel corporations were among those already gifted millions in the Federal Budget and then instructed about the formality of paperwork later. Competitive assessment and due diligence are such a drag, after all. 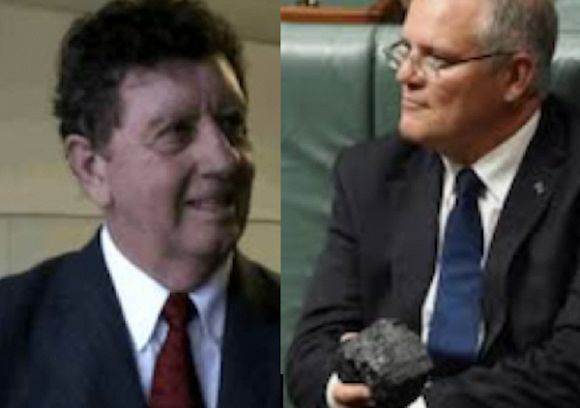 Delta Electricity: another grant recipient asked to formally apply for a grant which had already been approved by the Morrison Government.

As Delta Electricity chief shareholder and frequent donor to the Liberal and National parties, Trevor St Baker explained in 2017:

"In all my business life, I have never lobbied for a benefit, and have built businesses on fundamental policy principles which don't involve government handouts…”

Delta Energy purchasing Vales Point – valued at $739 million in 2017 – from the NSW State Government for the princely sum of $1 million in 2015 doesn’t count either.

Neither does ‘...slashing its value by almost half, despite posting a profit and pocketing a $62 million dividend’ in 2020.

So to recap, Delta Energy made money at the outset, purchasing a public asset clearly worth far more than its bargain-basement price. Delta Energy capitalised on the super-profitable business, pocketing sizable dividends. Then, when Vale Point's value was degraded, Delta would offset this loss as a tax benefit. The Government further invested in a failing business. Finally, and best of all, Delta Electricity did not need to apply for any of these financial windfalls.

That's value for our tax-payer dollar, right there.

‘...To fund the completion of a feasibility study into a new coal-fired power station in Collinsville, despite the company having no prior experience in the energy sector.’

Such minuscule grants are mere drops in the rising sea level, however, for an outdated industry that receives between $5 and $12 billion in Federal Government subsidies each year.

3. BE IN A COALITION OR MARGINAL SEAT

If you must pursue the bothersome task of filling in actual grant applications, ensure you are in a Liberal Party or marginal seat.

As demonstrated by the sports rorts saga, only those whose votes can assist its re-election are contenders for Morrison Government grants.

In recent years, there have also been fewer areas open to recipients who may apply without being invited to so.

In 2019, A $100 million environment grant initiative, established by the Government ahead of the 2019 Election, was restricted to 25 preselected projects. And, you guessed it, most of these were in key Coalition seats.

Being wealthy is certainly handy, not only because you are more likely to qualify for assistance from the Morrison Government but because, should the current of largesse suddenly change direction and any previously granted assistance be revoked, at least you won’t be destitute.

Unlike those who were hounded by Robodebts, for example. Or those who will likely be impoverished once the pandemic supports of JobSeeker and JobKeeper are withdrawn.

As exemplified above, fossil fuels are a firm Morrison Government favourite. The multitude of available grants, subsidies and tax exemptions should be enough to fill your coffers but just in case, relevant boards that may have an effect on your fossil fuel business are also stacked with industry executives, for extra insurance.

However, if energy seems like hard work, what with all the climate change activism, you can always be a media mogul. There are stipulations here, though — only magnates with a predilection for conservative politics will be considered.

In 2017, Murdoch-owned Foxtel was gifted $30 million, for which no application was required.

In April 2020, Foxtel was given another (no application) handout of $17.5 million. Then in June – as the ABC announced 250 job losses to deal with an $84 million budget shortfall – Foxtel was gifted a further (application-free) $10 million. Times are tough, apparently.

6. DO YOUR BIT FOR COAL AND THE COALITION

An important aspect of being a Morrison Government gift recipient is a tacit agreement to keep greenhouse gas emissions going at all costs and/or provide biased commentary and public support for the Coalition.

This explains why Vales Point is a perfect contender for government funding.

'Alarming new data [has confirmed] that the Vales Point Power Station has reported an almost three-fold increase in PM 2.5 pollution...'

This must also be why Murdoch-owned media is a pet Coalition project.

...Commercial media support conservative causes and political parties because their proprietors either believe in these causes and/or believe it is in their financial or business interests to do so. It should come as no surprise that big business will support the party of big business. Journalists and editors working in such self-interested commercial enterprises must navigate the expectations of those who sign their paycheques if they wish to survive and thrive in that environment. As the saying goes, he who pays the piper calls the tune.

7. DONATE AGAIN TO THE LIBERAL AND NATIONAL PARTIES

See point one above.

The reason this Government can do whatever it likes with our money is simple: it knows which side of the electric force it needs to harness if political power is to be safeguarded at all costs.

The health of children should come before the profits of power stations! 650 children in the Lake Macquarie & Central Coast area have asthma caused by emissions from the coal-fired power stations. Vales Point has applied to renew an exemption from pollution limits. #nswpol #coal pic.twitter.com/ZSugfXe1gq

This ;editorial was originally published as part of the Independent Australia weekly newsletter. These editorials are usually only available to subscribers and may be read online in the IA members-only area.