THE MOST PROFOUND challenge arising from Australia becoming the worst developed country for government debt is not the economic hardship this will impose on those having to pay the interest and repay the principal. A more serious issue is that most citizens haven’t a clue what is actually happening.

Australians are even more poorly served by their mainstream media in reporting deficits and debt than by their government which is accumulating them. 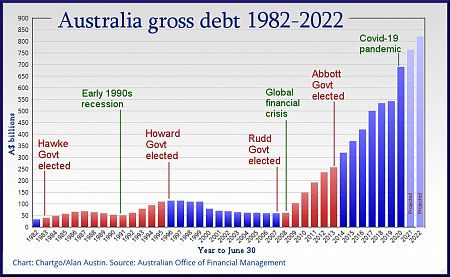 Last Friday, 28 August, gross debt clicked over $768.6 billion. This brings total debt added by the Coalition to $496.9 billion, just under half a trillion. Most Australians do not know this.

Just in the nine months since 29 November last year, total debt added was $213.4 billion. That is more than the Labor Government added in its entire five years and nine months. How many Australians know that?

It is critical to note that most of the Coalition’s debt was accumulated between 2014 and 2019 during a period of buoyant global trade, unprecedented demand for Australia’s exports and record profits. That was when all well-managed economies repaid much of the debt they needed during the Global Financial Crisis (GFC).

In fact, between 2012 and 2019, Australia added the most debt as a percentage of the gross domestic product of all 36 developed democracies in the Organisation for Economic Cooperation and Development (OECD). Australians who read IA, of course, know this. Most others don’t.

This contrasts starkly with Australia’s debt at the end of the Labor period, which was third-lowest in the OECD and highly strategic in nation-building. 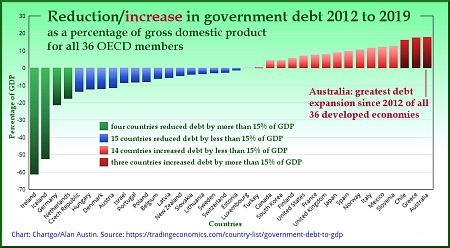 The most dramatic contrast between Labor and the Coalition regarding debt is not the quantum, it is the fact that Labor used it to greatly expand the national estate. The borrowed funds ensured far fewer Australians lost their jobs permanently as a consequence of the GFC than in comparable countries. But they also built assets which will benefit citizens for 100 years or more. These include school and community buildings, energy and water infrastructure, roads, railways, ports, social housing, defence housing, building insulation and other public assets.

Just in Labor’s last year, Australia’s net worth – as reported monthly in the Finance Department’s updates – increased by $45.4 billion.

The Coalition, in contrast, has virtually nothing to show for its vast borrowings – more than three times Labor’s total – and now heading towards four times. Since the Coalition took over from Labor, Australia’s net worth has plummeted by a staggering $418.3 billion. Most people don’t know this.

The record is undeniable. Labor applies the wealth of the nation to build a sound economy and a fair community. The Coalition serves primarily the foreign corporations which send much of the nation’s vast wealth straight offshore. This was detailed here at IA in June. We shall update this when the next set of national accounts are released. 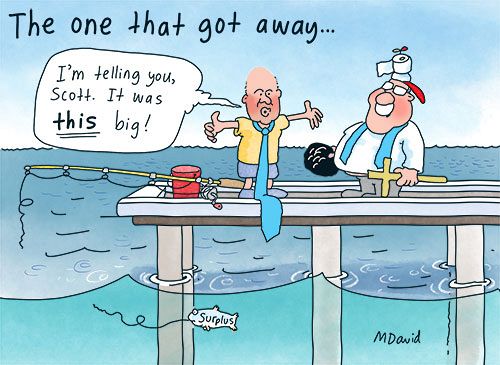 Australia was celebrated worldwide during the last Labor period not just for generating the best-performed economy the world had ever seen, but also for its infrastructure successes. In 2012, the London-based Infrastructure Investor gave the prestigious Infrastructure Minister of the Year award to Australia’s Anthony Albanese. Few Australians, if any, were told that.

Albo’s qualities which earned him the gong included:

‘...his skill and tenacity in overseeing infrastructure development in one of the world’s most active and mature infrastructure markets; his passion about infrastructure and its role in economic growth and job creation; and his recently launched $A6 billion Regional Infrastructure Fund to unlock investment in mining communities.’

‘...kick-starting major rail projects and the way he has involved the federal government in urban infrastructure, where it has not traditionally been particularly influential.’ 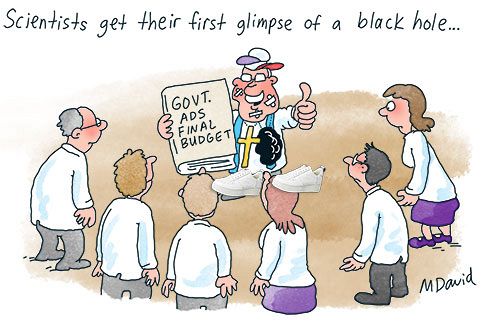 The tenth anniversary of Australia first achieving "world’s best economy" status under Labor, counters the myth of the Coalition as "best economic managers".

Most Australians know little about Labor’s achievements and less about the Coalition’s failures — because the dominant media employ teams of economics writers to falsify the record on both. Mainstream newspapers, television and news radio barely mention the subjects of debt and infrastructure today. But they used them relentlessly to condemn Labor throughout its tenure.

Clearly, what is ailing Australia is not its dearth of wealth. As we saw here last week, exports are booming and profits are soaring, despite the pandemic. Nor does Australia lack experienced political leaders capable of once again building the world’s best-performed economy and a just society. What is lacking is the will to ensure citizens are accurately informed and not conned continually by big business media into voting for a big business government.

This is a challenge beyond economics.

There is no shortage of nation-building initiatives which would address the deteriorating jobless situation and build the national estate — as happened between 2008 and 2013. This will happen again with another visionary administration.

If only someone like Anthony Albanese was around and available to lead a party in government. And if only voters knew his and his party’s actual record of achievement.