Roving reporter Rocky Dabscheck has managed to secure a world exclusive interview on Donald Trump to discuss his f**ken great plans for America.

Independent Australia: We are fortunate to have an exclusive interview with President Trump where he will explain his plan to make America great again.

President Trump. Welcome. Why have you chosen to do an interview with me, an Australian journalist?

Donald Trump: Because American journalists are bad people. They tell lies and cheat and I don’t like them and, more importantly, I couldn’t give a fuck about what you, or any other Australian, thinks. Seriously, ask most Americans to name a great Australian and they’ll say Sydney Harbour.

Trump: That’s what you ask me?! That’s not a nice question. That’s fucking hard! Why not ask me something about Ivanka?

IA: To help you out, how about I mention a few eras and events in American history, and you can say "Great" or "Not so great".

Trump: I’m not big on history. Can’t see any point in it. I can’t sell anything to any of them. They’re all dead.

IA: OK. Was America great when it only had the Indian tribes living there?

Trump: No fucken way. Those dickheads had it all to themselves, for fuck knows how long, and what did the fuckers do. Fucken nothing. Not one golf course. No resorts. No casinos. No shopping malls. Dead set fuckwits; the lot of them! I tell you, America was a barren shithole when the Indians ran the joint.

IA: What about Christopher Columbus in 1492. Was that great?

Trump: Get fucked. That lousy Spanish bastard. So fucking lazy. If I had my way, I would have included Spain in the list of banned nations. Fucking lazy, the lot of them. That paella eating ponce discovers the joint in 1492 and it takes at least another 100 years before they get it together to get over here to live. Not fucking great by any means.

IA: OK. White people started settling in America around 1600, and by 1619 the first slaves arrived to work in Virginia, Is that great?

Trump: Yes. That in itself is great; a step in the right direction, but it doesn’t, in itself, make America great. Though, mind you, cheap labour is fucking wonderful. I built my personal empire on it.

IA: What about the War of Independence against the British in the 1770s.

Trump: That wasn’t bad, but it doesn’t feel as satisfying beating up on people who use tea towels to dry dishes, rather than wear them on their heads. Beating the Brits is a bit like dancing with your sister. But I do agree. By now America is really, really good.

Trump: Get fucked, you idiot! George fucking Washington!! Fuck it. Have you seen how far from Florida Washington is? I hate that word Washington — and the place is a shithole. Freeze your balls off in winter, even in the Oval Office.

Trump: Granted, he did a few good things, and word is, he was a root rat. Fucking great, but then he goes and blows it by getting one of his slave girls pregnant, and lets her have the kid. Dumb! You’ve got to know when to withdraw when making love and war. We’d still be fighting in Vietnam if Jefferson had been running things in the 1960s and 70s.

IA: Well, what about America under Abraham Lincoln.

Trump: No way. The man was a disaster. With that fucked beard of his, he looked like he was auditioning for the Taliban.

IA: He did end slavery.

Trump: Fucking worse thing ever. The cost of labour skyrocketed. Bankruptcies shot through the roof. Small businesses copped it in the arse big time. Lincoln was a Chinese spy as far as I can tell. Get the cost of labour in America up — we become uncompetitive with China and, bingo, America’s fucked.

IA: What about the Civil War at the same time?

Trump: Now that was great. America was great then. We won a war as fully fledged America. Not just telling the Brits to fuck off.

IA: But lots of Americans killed other Americans.

Trump: So, what’s new. We’ve been killing each other for years and years. Main thing is: we won a war.

IA: But America was fighting itself. You had to win.

Trump: Shows how fucking great we were. Our military was strong enough to be both sides in a war. That is true greatness.

Trump: Yes. We were great then.

IA: And then what?

Trump: Nothing much for a while. The first Model T Ford in the early 1900s was OK, but not great. Proof we weren’t that great is the fact World War One is called ‘The Great War’ and the stock market crash in the 20’s led to ‘The Great Depression.’ If America was great then, they couldn’t call these other things great.

IA: What about World War 2?

IA: You weren’t born then. So America was great when it dropped atomic bombs and killed countless thousands of Japanese civilians.

IA: And, since then?

Trump: We were great until the Bay of Pigs fucked us up. After that we couldn’t even beat a bunch of rice farmers in Vietnam. Fucking terrible.

IA: When did America become great again, if indeed it has?

Trump: We hit our stride in the 80s. America the Great was back again. Wiped Grenada’s arse in 83.

Trump: Who cares. We won, just like in 89 when we shoved it up Panama’s clack hole.

Trump: Who gives a fuck about fair? Not me.

IA: I suppose the Berlin Wall came down in '89 and the U.S.S.R. dissolved.

Trump: Yes, that was good. Between you and me, I am in discussions with Putin about rebuilding the wall, and getting Trump Constructions to erect it. We’ll do it on the cheap, probably with left over materials once we complete the wall along the Mexican border. 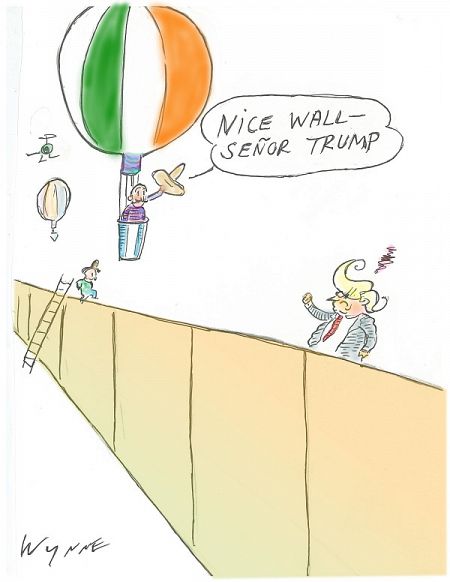 IA: And since then?

IA: So basically, America was great during its Civil War, because you won it. When it dropped atomic bombs on Japan and when it invaded Grenada and Panama.

Now to the question: what’s your plan to make America great again?

In the next weeks, I will declare America is at war with Hawaii.

IA: But that is part of America. You can’t declare war on yourself.

Trump: Get fucked. If I want to I’ll declare war on Hawaii. In fact, I’m  drafting an Executive Order to add Hawaii to the nations whose citizens are banned from coming to America. Bunch of hippy wankers.

Think about it. If we get rid of Hawaii from America, then it proves my point that Obama was an alien who had no legal right to become President. Plus, those fuckers eat into profits made in Florida. My real estate assets in Miami will go through the roof once we get rid of Hawaii.

I plan to bomb the shit out of them, then give it to China, to write off our debt to them. Win win!

And we may declare war on New Zealand as well. Should only take a week tops to have them on their knees. Maybe drop an H bomb on them. No one will miss them anyway. Their sheep are more popular internationally than their people ever will be.

IA: Thank you President for your time.

So there you have it folks. The President’s plan to make America great again. Declare war on Hawaii, New Zealand and rebuild the Berlin Wall.

This is a case where "I'm Not Lying" is a lie. https://t.co/usK0ktYQze

Rocky Dabscheck is a musician/songwriter and front person for Rocky and The Two Bob Millionaires. He is also author of Stoney Broke and The Hi-Spenders.