Whistleblowers provide a valuable service by disclosing information in the public interest but are not often duly supported. Peter Wicks reports.

AS A SOCIETY, we understand, without endorsing the state of affairs, that there are many industries that have criminal or corrupt individuals working within them.

We also understand that it is, in many circumstances, incredibly hard for law enforcement personnel to uncover unlawful behaviour within these industries.

This is why we rely on whistleblowers. People whose conscience will not let them sit quietly by, turning a blind eye to behaviour they know is either criminal, corrupt or immoral.

Blowing the whistle on your workmates, or your employer, is not a decision that is made lightly and almost always takes great courage, as it is often the whistleblower who suffers the most in the aftermath.

With whistleblowers playing such a crucial role and providing a service that's value is often beyond measure, it is vital that they be given support and protection by both law enforcement agencies and also by government.

With that in mind, I'd like to look at some cases that demonstrate the Coalition's record in protecting whistleblowers over recent years.

It is natural for a parent to seek the best education for their children; I'm sure Freya Newman's did.

Freya was a student working part-time in the library at the Whitehouse Fashion Institute to help pay her way through Uni. When Freya discovered that Tony Abbott's daughter Frances was being gifted a $60,000 scholarship while she had to work her butt off to pay her way through her education, she thought the public would be less than impressed at the "sense of injustice" of it all and so blew the whistle.

Freya was right. The public greeted the news with hostility. It was clearly the case of a favour being done because of who Frances' father was, as it was looking likely Abbott would end up in the Lodge at the next election.

Making matters worse, once in office, the Abbott Government sought to deregulate universities in a move that would see some students paying up to $100,000 for a degree, as well as extending funding for private colleges, like Whitehouse. Others who paid their way through their course, like Freya, the Abbott's Government planned to deal with by attacking their penalty rates — an attack that Malcolm Turnbull plans to continue to this day.

So what happened to Freya Newman?

Freya was not treated as a heroine; she was not lauded in the media; there will be no monuments, streets or parks named after her.

Instead, because she fell outside whistleblower protection laws, Freya was named and shamed publicly then left to deal with mountains of vitriol and foul abuse only those from the hard right are capable of spewing out. She was then charged criminally and dragged through the court system. She was eventually granted a good behaviour bond, but it's fair to say she was left terribly battered and bruised emotionally.

At any stage of the ordeal, did Attorney General George Brandis do anything to assist the poor whistleblower or close the loophole that found her in court? Of course not. He was probably too busy defending our god-given right to be bigots.

Currently, we have a refugee detainee system in crisis. We know this because there are whistleblowers who have finally had seen and heard enough about murder, rape, beatings, sexual assaults and utter degradation. Not conditions that these people have fled — but conditions they have been subjected to while under Australian Government supervision and "care".

Welcome to the free world.

However, Immigration Minister Peter Dutton made it clear that the government was going to crack down on this type of behaviour. Unfortunately, though he was not referring to the crimes against humanity being committed in the detention centres he is in charge of — he was referring to those blowing the whistle about the conditions these poor people are made to suffer.

As I write this, I am pleased to say that some have taken the whistleblowing laws into their own hands.

Doctors at Melbourne's Royal Children Hospital have risked two year jail sentences to speak out that the conditions in Dutton's detention centres are harmful to children. In fact, the doctors have gone even further, refusing to release children in their care back into Dutton's detention centres for further psychological damage.It is tragic that a doctor needs to risk two years jail as a whistleblower to ensure a traumatised child can receive adequate treatment.

We also discovered recently the awful case of a young woman forced to beg the government to allow her to come to Australia for an abortion after she was raped at the detention centre on Nauru. This awful case only came to light after the woman's lawyer, tired of waiting for a response from the government, blew the whistle to the media. The recent events in this case are even more shocking.

Another area many of you will know I'm passionate about is animal welfare.

Currently the government is looking to bring forward legislation that has become known as Ag Gag legislation.

Ag Gag is legislation is designed to shut down the reporting of cruelty to animals in the agriculture sector.

Supporters of Ag Gag claim it strengthens trespass laws and protects consumers from biosecurity hazards by increasing sentences for animal advocates who enter farms and obtain footage of alleged cruelty, as they may bring an infectious disease in with them that infects livestock. So great is this threat that there is no proof it has never occurred once. Every bio-security breach that has ever happened has been as a result of either workers on the farm site itself or occurred during the transport of livestock.

However this proposed Federal Ag Gag legislation not only seeks to imprison animal activists acting to enlighten the public, it also seeks prison sentences and huge fines for industry whistleblowers who report cruelty. There is a defence in the proposed Act of good faith, but the onus of proof is upon the activist to prove. In other words, they are guilty before being proven innovent. All this points to the ridiculousness of the Ag Gag proposals. These whistleblowers are working on site already, but only suddenly pose a risk to society when reporting on the cruel and criminal behaviour of their employer?

But it gets worse, the proposal also seeks prison and fines for the publishing of footage or photos of cruelty obtained.

This means the editor of the Sydney Morning Herald, The Age, or the producers of Four Corners can be sent to jail for publishing footage from an agricultural facility that shows cruelty. Since when has what's published on page five of the paper been responsible for a bio-security issue? Supporters of this legislation point to the recommendation that incidents of animal cruelty be reported within 24 hours and therefore that improves animal welfare. This is highly deceptive, what it in fact means is that if the perpetrator by some miracle ends up in court, given the small amount of evidence that can be garnered in the 24 hour window of opportunity, it will be impossible to prove a pattern of behaviour and it will be argued as an isolated incident.

There is however one whistleblower the Coalition have been more than happy to embrace, Kathy Jackson.

Jackson is of course the union turncoat and self-proclaimed whistleblower who now finds herself under the investigation of two police forces for alleged criminal conduct, as well as bankrupt after Federal Court ordered her to repay $1.4 million of allegedly misappropriated funds to union members.

Kathy Jackson is not a whistleblower. In my humble opinion, she is little more than a criminal opportunist. Throwing someone under the nearest bus for financial gain and then hoping that her self-proclaimed whistleblower status will keep her behaviour from being put under the microscope does not satisfy my definition of "whistleblowing".

Yet, this is the type of "whistleblower" the Coalition support.

It is interesting to note that the parliamentary apology the Coalition made for Craig Thomson's parliamentary address, way back at the start of his saga, now makes the Coalition look utterly foolish. Every single one of those whom Thomson named and the Coalition made the parliamentary apology to is now either in gaol or under criminal investigation by the Federal Police's organised crime division. Moreover, we have  learnt this week that Michael Lawler is to have an independent investigation launched into his behaviour by the same Government that's spent the last few years defending him. I have little doubt, though, that this "independent" investigation will be more about covering the tracks and ties of former Employment Minister Eric Abetz, though I could be wrong.

I guess all this begs the question: "Who was the real HSU whistleblower?" 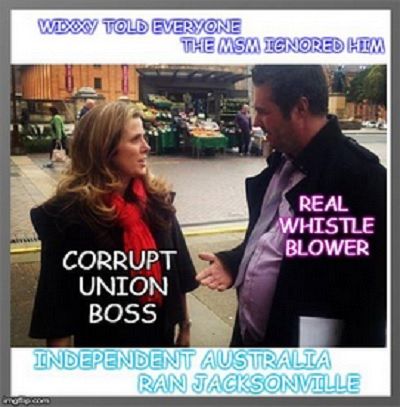 "very interesting and suspiciousFour Corners of Jackson and Lawler — and the Abbott connection https://t.co/4vcIO1JJHH @IndependentAus