Hundreds of people gathered on the steps of the Victorian Parliament House in Melbourne yesterday to stand in protest against the proposed “ag-gag” laws.

For the third consecutive year these proposed laws have been tabled and once again, people are out in force voicing their opposition.

“The current system of enforcing animal welfare protection laws is completely broken and what’s currently proposed by this ag-gag law is not going to help but hinder any progress towards fixing the system. It creates an environment where a task that should be performed by government is being performed instead by community minded citizens."

And it is because of these “community minded citizens” – or “animal activists”, if you like – that the public is aware of puppy farms, caged hens, live export atrocities, the horrors of factory farming and, most recently, Animals Australia’s exposé on the greyhound racing industry’s systematically cruel practices. Without the brave work of these people, the Australian public would be ignorant of many animal abuses — many of which only continue because the public demand the product. If the truths continue to be revealed, then its dangerous times for agribusiness.

West Australian Liberal Senator Dr Chris Back, who is supported by the agricultural industry and much of the country media, wants the laws to be passed in the Senate as quickly as possible. They want to convince the public they are acting the best interests of the animal.

According to Senator Back (reported in the Weekly Times, June 17):

“From a veterinarian’s point of view, the sooner an animal is attended after someone has observed cruelty, the more likely it is that the animal is going to recover, and the more quickly a perpetrator can be brought to account, the more quickly you can stop it happening to other animals.”

However, the reality is that, if passed, these laws would prohibit much of the footage taken in the first place to expose the perpetrators. There would be no chance for someone to "observe the cruelty" because they would risk hefty fines and jail time.

“... improving conditions is not the answer. We need to shut these places down."

The laws purpose is, in effect, to silence would be whistle-blowers and severely stifle the debate surrounding animal welfare. The perpetrators who carry out the cruelty are protected whilst those trying to expose it are persecuted.

The United States has already passed the laws in many states, with four Californian activists charged in January under Utah’s ag-gag law for standing on the roadside and taking pictures of a pig farm.

Similarly, if the laws were to be passed here in Australia, taking a photo or filming abuse would be a punishable crime, but the abuse itself would remain ignored.

The industry will continue to fight to keep the public in the dark and, should these dangerous laws be introduced, they will have won an enormous victory.

If they have nothing to hide and are in support of protecting animal welfare then why not open the gates and let the people in? 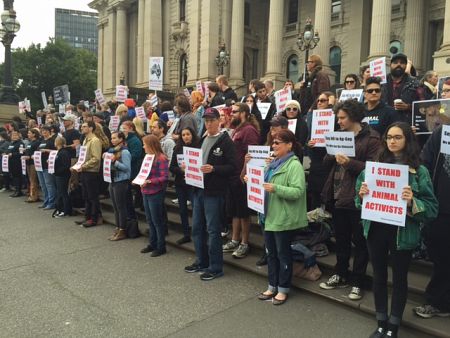 News with a conscience. Subscribe to IA for just $5.

29 June 2015, 9:30am Hundreds of people gathered on the steps of the Victorian Parliament House in ...
Join the conversation
comments powered by Disqus
News updates