Prime Minister Scotty from Photo Ops discusses possible photo options with his trusty, personal photographer who, for privacy concerns, shall be referred to as David Bailey.

MORRISON: Seems I have to hold back on selfies for a while. Any ideas, David?

MORRISON: Photos with kids always go down a treat. How about a series of photos of me at the local primary school playing with the children? Afterwards, I could order pizzas for the kids. We could start with me playing with the kids, then eating pizza with them. Should make for some great photos.

BAILEY: I like it, but the optics may work against you.

MORRISON: Really? I don’t see how.

BAILEY: Men your age. Powerful men and women, kids, and pizza. The QaNon propaganda about Hillary Clinton and the paedophile ring. Kids and pizzas are a no-no for photos these days.

MORRISON: Good friends of mine, Tim and Lynelle Stewart are active in QaNon and it’s never been an issue. Our two families, kids and all, often share a meal of pizzas together. Always a fun family night for all of us. I don’t see the problem.

BAILEY: Trust me, Prime Minister, better to leave it alone. 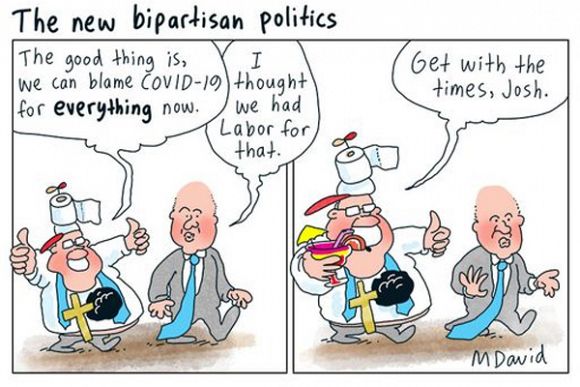 Due to the unprecedented circumstances the world is in, Prime Minister Scott Morrison calls his ministers for an extraordinary meeting.

MORRISON: Okay. I’ll take your word for it. I’m seeing Gladys B later today. She’s looking at improving her public image, with all the recent scandals flying around her.

MORRISON: At a winery on Sydney’s outskirts.

BAILEY: Sounds good. What are you thinking of?

MORRISON: I like the hands-on look. Maybe, Gladys and I inspecting barrels of wine. Should work a treat. I will be seen as supporting our embattled wine industry.

BAILEY: Great thought ... but not such a good idea for you to be seen like that with Gladys at this time.

BAILEY: Whoa. Nothing like that Prime Minister. You, Gladys, barrels; not advisable right now.

MORRISON: Okay. I’ll take your word for it. I know, "Scotty the Action Man" always works! A photo of me in army fatigues, tank behind me. Should make our marginal seat backbenchers breathe more easily.

BAILEY: Another great idea, but I’d hold off on it for a few months.

BAILEY: Yes, but the recent revelations about our military in Afghanistan has nobbled that as a winner of a photo op for some time to come.

MORRISON: Oh. I see your point. I’ve got it! Hillsong has never let me down. Great visuals. Plenty of good photo ops. We’ve got a big service organised this weekend. I’ll be on stage with our church leader, Brian Houston.

BAILEY: Yet another great idea, that sadly, I must reject.

BAILEY: Think about it Prime Minister. Houston’s father, Frank, has been exposed as a paedophile. Houston has been attacked for not reporting his father’s sexual deviancy. Add to that, increasing anger over religious institutions not paying tax and, on top of all of that, Brian Houston was rejected by Donald Trump’s White House — and that really is saying something. Not a good look.

MORRISON: Fair dinkum! This is getting worse by the minute. Okay. Sounds like it’s time to reprise the chunk of coal. Maybe me in my PM’s office, with a chunk of coal on my desk.

MORRISON: Can’t do?! Get fucked! Of course we can!

BAILEY: Sorry Prime Minister. With $700 million of our coal unable to unload in China, it’s no longer a good look — highlights you’ve exasperated our problems with China.

MORRISON: This is getting bad. What’s left? I know! With fire season upon us, a photo of me with some kitted up CFA firefighters is a must.

BAILEY: Let’s knock that idea on the head straight away. The less said about you and fires, the better. Hawaii.

MORRISON: Oh shit. They should be over that by now. Okay ... got it! I know! How about this?

MORRISON: With us doing so well with COVID, I should rock up to a hospital, surround myself with nurses and get a happy snap. Can’t bomb out.

BAILEY: It may work ... but I doubt they’ll be smiling, seeing you’ve made it hard for them to get a pay rise.

MORRISON: We could all mask up. That way you won’t see they’re not smiling.

BAILEY: Sends the wrong signal about how we’re doing with the virus. Looks a bit negative to me.

MORRISON: How about a photo of me at a supermarket checkout?

BAILEY: Forget it. The new industrial relations bill has gone down like a lead balloon with casual workers, and lots of supermarket workers are casual.

MORRISON: This is going from bad to worse. I’ve got it, and I won’t hear anything negative about this idea. Me, at a supermarket, with rows and rows of toilet paper stacked up behind me.

BAILEY: Great! I like it, but let’s go with a more personal image.

MORRISON: What do you suggest?

BAILEY: You, on the toilet, with a toilet roll in both hands and the caption Good governance: toilet rolls galore.

MORRISON: Love it! I’ll get on to make up now to get me ready and I’ll wear my Cronulla Sharks guernsey and cap. How good is that?! 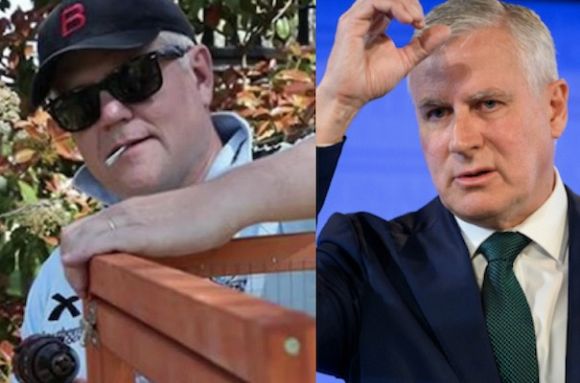 ScoMo and Elvis meet in the PM's backyard and make a spur of the moment decision to attend a local garage sale.