Scotty from Photo Ops enjoys some me time

Independent Australia is granted access to document Scotty Morrison taking time out from his gruelling Photo Ops schedule to relax at home.

JENNY: Scott, what are you doing?

SCOTT: Engaging in much needed, restful me-time so I am able to continue my excellent stewardship of our great nation.

JENNY: That’s all well and good, but what are you actually doing?

SCOTT: Watching a replay of my beloved Sharks 2016 premiership victory over Storm. If only I’d been prime minister then — imagine the photo opportunities.

JENNY: If that’s all you’re doing, you can get off your fat arse and water the lawn and garden. They’re looking pretty dry.

SCOTT: I’ve said this before. Obviously, you didn’t hear it. I don’t hold a hose.

JENNY: Oh, really? I’m Prime Minister Morrison and I don’t hold a hose? Quite frankly, I don’t think you hold a candle to your predecessor, Tony the Mad Monk. He’s not too proud to get his hands dirty. If only he was a Hillsonger, he’d be my perfect man. Make yourself useful.

SCOTT: And do what?

JENNY: You could empty the dishwasher for starters.

SCOTT: Whatever! If it makes you happy.

(PRIME MINISTER MORRISON FORCES HIMSELF OUT OF HIS LOUNGE CHAIR, REMOVES THE CONTENTS OF THE DISHWASHER AND PLACES ALL THE ITEMS ON THE KITCHEN BENCH. HE RETURNS TO THE LIVING ROOM, STRETCHES OUT ON THE COUCH AND CONTINUES WATCHING THE SHARKS TRIUMPH.)

JENNY: Is that it? Is that really your idea of emptying the dishwasher? How about putting them where they should go?

SCOTT: You can’t be serious. Fair dinkum. I’m not a machine. After the effort I’ve just put in, surely I’ve earned some downtime to relax. 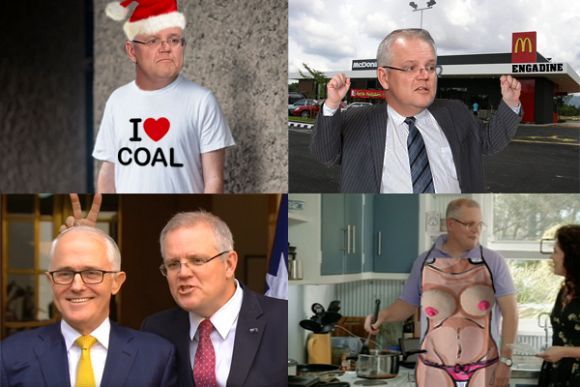 ABBEY: Dad, can you help me?

SCOTT: What is it, dear?

ABBEY: I want to be better at maths. I’m having trouble with this equation. Can you show me?

SCOTT: No dear. Better you have a go by yourself. Remember God and country reward those who have a go. Better to be a learner than a leaner.

ABBEY: What does that mean?

SCOTT: It means God helps those who help themselves. I‘m helping myself now by taking some much needed and well-earned rest. If I help you with the equation you may develop a reliance on others – and the government – to bail you out of trouble. That is the doorway to socialism, dear.

ABBEY: I like socials, Dad. I hope our school doesn’t have to cancel our social this year like they did last year.

SCOTT: No, nothing like that, dear. Socialism is when people get handouts from the government and don’t work for it themselves.

ABBEY: Is that like the $10 million you gave to Visy, owned by your friend Richard Pratt?

SCOTT: Not at all, dear. That’s nothing like socialism.

ABBEY: It looks like what you just said socialism is.

SCOTT: No dear. It’s not socialism. I’m following an age-old Aussie tradition — looking after your mates.

ABBEY: That’s the same as looking after your friends and family isn’t it?

SCOTT: Yes it is.

ABBEY: Well, you know how Sally is one of my school friends?

SCOTT: Of course I do.

ABBEY: Her mother is a musician and her father is a choreographer. You’re the Prime Minister. Can’t I get you to help them by giving them money? After all, they’re my mates because my friend Sally is their daughter.

SCOTT: I have, Abbey. I’ve provided $250 million for the arts community.

SCOTT: Yes it is.

ABBEY: Then why did Sally’s parents have to sell their cars and their pet dog, if they have all that money?

SCOTT: I don’t know. Go ask your mother. Are they churchgoers?

ABBEY: I don’t think so. Sally told me they don’t believe in God. I couldn’t believe my ears!

SCOTT: That explains it.

JENNY: Scott. Scott! Can you hear me?

SCOTT: What is it now, Jenny?

SCOTT: Kidding me aren’t you?

JENNY: No, I’m not kidding.

SCOTT: And risk putting my back out! Seriously, Jenny! Do you have any idea what the burdens of my job feel like? Well, I can tell you...I’m still getting over having to cut short our Hawaiian holiday. And for what?! Like I said, I don’t hold a hose.

JENNY: Well, I won’t be holding any hoses around here if you don’t get our bins out, quick smart.

(AS OUR PRIME MINISTER LUGS HIMSELF UP OFF THE COUCH, HIS PHONE RINGS. NSW PREMIER GLADYS BEREJIKLIAN IS ON THE LINE.)

GLADYS: Scott, I’m copping lots of flak over keeping the test match and opening it to the public

SCOTT: You can’t pull the pin on it, Gladys.

GLADYS: Why? The medicos are going ballistic.

SCOTT: Think about it, Gladys. Great photo opportunities! Especially on McGrath Day. I can be photographed next to Glenn! It will really highlight my deep concern for our public health.