SCOTT MORRISON: Wonderful to be with all of you again.

I met earlier with Peter, Michaelia, Josh and Mathias. We speak as one. The most important thing to stress during this sitting of Parliament is ... blame Dan Andrews for everything. Everything!

(The room responds with warm applause and rings of "Hear, hear!")

SUSSAN LEY: What a guy! No wonder we’re in power.

MORRISON: Peter. Would you like to mention some things we’ve decided we can’t really pin on Andrews?

PETER DUTTON: Of course, Prime Minister. We started with the assassinations of Archduke Franz Ferdinand, Mahatma Gandhi, JFK and Lord Louis Mountbatten — all no-gos. First three happened before he was born, and he was only seven when Mountbatten copped it. Hard to convince the Australian populace a seven-year-old Andrews was that politically active.

SIMON BIRMINGHAM: Bummer! I was thinking we could blame him for the breaking up of The Beatles?

MORRISON: Great idea, but, tragically, we’ve had to rule out anything that happened before he was born.

BIRMINGHAM: What about pinning Lennon’s assassination on him? That happened after he was born.

MORRISON: Great idea Simon. We’ll get the boffins to construct Andrews masterminding a Manchurian candidate to get Lennon. How good is Simon?!

DUTTON: Agree. We workshopped that scenario, but Osama bin Laden was too well known so plausibility may be difficult to achieve.

Greg. You’re a Victorian. Any ideas?

GREG HUNT: Yes, I’ve got a good one. I’ll claim Dan Andrews sabotaged the mask I attempted to wear at the press conference when I was showing people how to place a face mask on, just to make me look incompetent.

Had to show this twat again 👍😜 https://t.co/Nf1pFQf1cY

MORRISON: Hard to argue that point, Greg. After all, a pandemic has happened on your watch. Speaking of watches, any suggestions, Stuart?

STUART ROBERT: I’m sure we can pin the fake Whiteley painting, ’Moonlight on Lavender Bay’, on to Andrews. I’ll get the Federal Police to track down his art teacher from school and get a statement confirming Andrews was obsessed with Whiteley.

MORRISON: How good is Stuart Robert?! He’s the real deal!

Michaelia, share with the room what you’ve got up your sleeve.

MICHAELIA CASH: I’ve got a beauty! We’ll be able to tar and feather "Dan the Man" over this. Remember how long it took to find Saddam Hussein?

DUTTON: I’d have caught him sooner.

CASH: Well, I’ll plant the seed Andrews dug, with his own hands, the rat hole Saddam hid in before being caught in it.

Dan Andrews borrowed my favourite T-shirt and never gave it back.

MORRISON: Fair dinkum, that’s bloody good Michaelia! Planting the seed. I like it!

Reckon it’s the right time to hear from our Minister for Agriculture and Drought, David Littleproud.

ANGUS TAYLOR: (Sotto voice to Alex Hawke) I think he means David Littletobeproudof. If I hadn’t taken all the water he wouldn’t even still have "drought" as part of his title.

DAVID LITTLEPROUD: I’ll frame him as the one who set up the sale of S Kidman and Co’s pastoral farm to China’s Shanghai Cred back in 2016. Andrews was already Premier by then.

CHRISTIAN PORTER: Can’t do, Prime Minister. Gina Rinehart owns two-thirds of that deal. Better not rattle her cage. Plus it’s not in Victoria. And investment from international interests is a federal responsibility.

MORRISON: Don’t worry about it being a federal responsibility. Look at the aged care sector. But I agree — better not rattle Gina’s cage.

JOSH FRYDENBERG: I have a good one, Prime Minister.

MORRISON: The stage is yours, Josh.

LEY: I can slam him for ignoring the negative environmental impact from overdevelopment of flashy apartment high rises, which, no doubt, is the thrust of his push to establish Dan and Daniella Andrews mortgage packaging.

FRYDENBERG: That may be overkill, Sussan. After all, we’re talking bullshit, not the truth.

LEY: Not the truth? It’s never stopped us before!

(The gathering erupts into uproarious laughter. They eventually settle down.)

MORRISON: Great ideas. Very productive, but I think we need to make out Andrews’ dictatorial style makes him impossible to work with, and that is why Victoria’s Chief Health Officer resigned.

RICHARD COLBECK: Brett Sutton didn’t actually resign. The only chief health officer to resign since the pandemic is Brendan Murphy.

MORRISON: Oh, good you know something, at least, Richard. What did Brett Sutton do?

COLBECK: He had a short holiday, Prime Minister.

MORRISON: Hmm. Well, you can’t hang a man for taking a holiday. 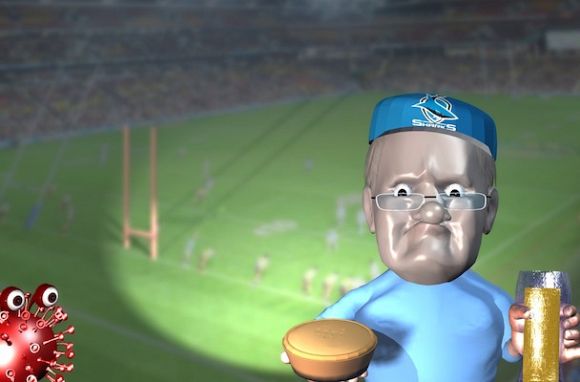 Prime Minister Scotty Morrison calls a press conference to explain why he had already taken off on holiday without explanation.

Rocky Dabscheck is a musician/songwriter and front person for Rocky and The Two Bob Millionaires. He is also the author of '42+1: The (Real) Meaning of Life' and ‘Stoney Broke and the Hi-Spenders'.