By Graham Jackson | 7 October 2012, 2:00pm | comments |
We must also embrace Real Waubra, rescue it from the scaremongers and buy more than a chicken roll from its annual Community Festival, writes Graham Jackson. 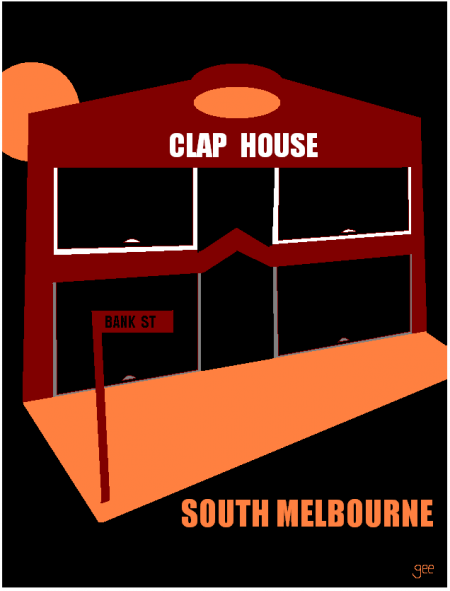 TS Eliot famously wrote — and those of us at Waubra on Saturday might have agreed. The day was a shocker ― cold, wet and windy; a good day for ducks, wind farms, and people who wish Waubra no good.

All those at the Waubra Festival, on the other hand, wished the community very well indeed. Looking surprisingly healthy and cheerful, if a tad cold, the local sporting clubs, CFA and other community groups were all there to welcome us, showing no signs of the numerous diseases, disorders and pacts with the devil I was certain would greet us.

The Waubra Foundation, that malign, shadowy creature, had prepared me for the worst. Those wind turbines I’d glimpsed on the skyline as I passed through Learmonth were responsible for half the world’s problems. If I got too close, would I be infected with a sexual disease? I got on the tour bus feeling decidedly nervous.

Huddling at the foot of a turbine tower – as sheep do to shelter from sun and inclement weather – I felt decidedly at peace with the world. My teeth were chattering, which effectively drowned out any background turbine hum (of which I heard little), but all around the world was encased in cloud. Turbines came and went in the scudding grey. Here and there a gold canola crop splashed through the drabness. Below, a green pyrethrum crop. Beyond, cattle and sheep. The Waubra Wind Farm stands on private, working farmland producing agricultural as well as energy returns. 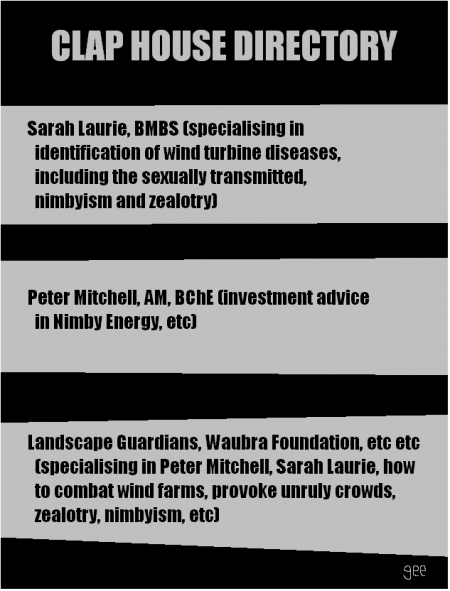 The wind farm company pays local rates, its employees contribute to the local community. It helped provide the sporting facility in which I escaped from the weather to eat my chicken and salad roll. It’s all pretty real.

Sandi Keane has suggested the community rebadge itself as Real Waubra, to differentiate itself from the shadows in South Melbourne that took its name and in the same name pitched the yarns about how wind farms will do us all in. I have no idea why people like Peter Mitchell and Sarah Laurie operate in this fashion. What’s their motivation? Genuine concern? Nimbyism? Something more sinister?

The Landscape Guardians is another anti-wind farm name. And to be fair, the sight of turbines on a horizon isn’t everyone’s pleasure; where some see elegance, others see visual pollution. Where I grew up on the Murray River in the 1950s, locals agonised over the drowning of ‘Old’ Tallangatta, a township about to be flooded by a dam. There were many regrets. How could a bland watery surface compare to the vibrant life of a town? ‘New’ Tallangatta grew up in its place.

hat is reality? A planet with incredible numbers of ‘human kind’ struggling to sustain itself. We have to sustain the Murray-Darling so it can sustain us. We have to be able to produce sustainable energy. 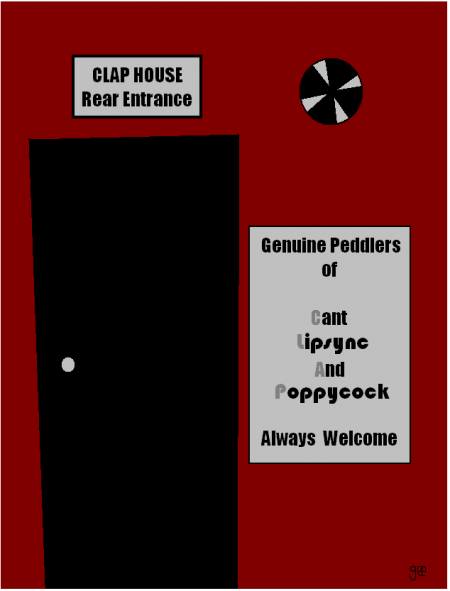 As I write, I have a son making a documentary in the Amazon headwaters about the Shuar people ― some of whom still try to balance their human requirements with those of their environment in the traditional manner. This is their Dreaming, just as a sparse number of our fellow Australians – the First – still struggle to maintain their Dreaming. This is another kind of reality, one most of us have lost, one that can no longer hold sway over our continent in the way it once did ― and as Bill Gammage has so wonderfully described in ‘The Biggest Estate on Earth’.

Our present reality must still include this. It must also embrace Real Waubra, rescue it from the scaremongers and buy more than a chicken roll from its annual Community Festival. Go and have a look. It’s on the Sunraysia Highway, has an old pub that I want to visit next time, and friendly, healthy people. The energy it’s producing is helping us reach the sustainable targets Australia is aiming for ― without any risk of social disease.