At the 30,000 strong Melbourne March in March yesterday was Graham Jackson, who says the value of democracy is our right to march behind any flag we wish to raise.

WHAT PROMPTED THIS ARTICLE was reading JohnB and Decaf’s responses to John Quiggin’s ‘Abbott and Newman’s neo-liberalism wreaking havoc’.

JohnB and Decaf both walked away from the Sydney March in March. I went along to the Melbourne event, but didn’t walk away.

The Melbourne March in March, like Sydney’s, attracted all comers — from the traditional Marxist and Socialist people, to the more recent flora and fauna activists, with all of whom I have interests in common. I have less in common with the Hare Krishnas who were also there. They started down on Bourke St, danced and sang their way up Swanston to the State Library where, for a while, they camped in front of the slowly growing March in March crowd.

Despite these distractions – or, more accurately, because of them – I got totally involved in the occasion. JohnB and Decaf both felt they couldn’t march behind ‘the flag’ of the Sydney event. And this is the point. March in March invited everyone to bring their own flag. Which I did not, being an old codger, none too comfortable raising banners, but nevertheless interested in having a look at what others were marching behind.

Most reflected what we were shortly advised would be the calls as we marched: 'Shame, Abbott, Shame', ‘People Over Profit’, ‘Not in My Name’ and ‘Abbott’s Got To Go’. Just loved that last one, although it probably won’t happen any time soon.

‘People Over Profit’, the call against the corporatocracy, is the call of our time. For me, this spoke most profoundly — the reason I was marching. I live in a democracy. The people are the power. Not oligarchs. Not plutocrats. Not the corporate monsters enfolding the earth in their tentacles.

Many cheers were raised as we listened to the speeches, but none were louder than those greeting a denunciation of Murdoch’s attack on the ABC. I suppose, more particularly, the attack of Murdoch’s journos on the ABC. You all know their names. How craven they are, these lickspittles.

By contrast, poor old Abbott was a bit of a straw man. The best sign I saw raised aloft implored Margie to take Tones off to bed and occupy him for a while — a minute, a day, a week? God alone knows. Half way along the march someone started chanting ‘Abbott is a Wanker’, which made me think I was marching to the MCG and raised a doubt or two about Margie’s ability to keep her man’s mind on the job. 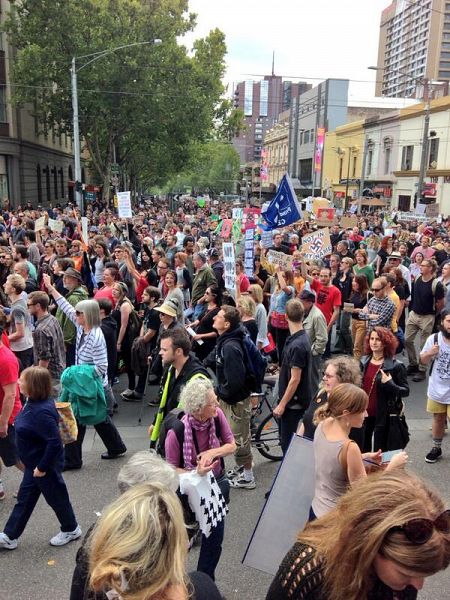 It was all very good humoured, even as the occasion at times obscured the intent of the Abbott government to hide its intentions (Commission of Audit), keep its operations secret (Operation Sovereign Borders) and, not to put too fine a point on it, tell lies (Operation Budget Emergency).

‘Not in My Name’, of course, was about incarcerating asylum seekers in detention centres/gulags/transferee stations/concentration camps – take your pick – off the Australian coast. I called this one pretty loudly.

For the record, I have a unionist background and joined the ALP for the first time late last year in order to vote for Albo and got Shorto instead. That said, unlike a few of my mates, I’m willing to give Shorten a chance to lead Labor on a long term game.

As things stand, no one in Labor seems willing right now to take the hard yards abandoning off-shore processing and getting down to tintacks with the Indonesians, Malaysians and so on to work out the longer term regional answers. So, at the moment, I’m happy to march behind ‘Not in My Name’. Also willing to give everyone a serve – Labor included – taking money off tertiary education, scientists, public servants.

Not in my name.

But in the end I marched behind the unraised flag of the people’s right to protest against anything they wished to protest against. This flag sat on the lap of an elderly woman in a wheelchair. It said something along the lines of ‘we have the right protest’. So while I don’t know if this woman had a particular gripe, apart from her terminal condition (from which we’re all just a breath away) I know I agree with her general conviction — that the value of democracy is our right to march behind any flag we wish to raise. 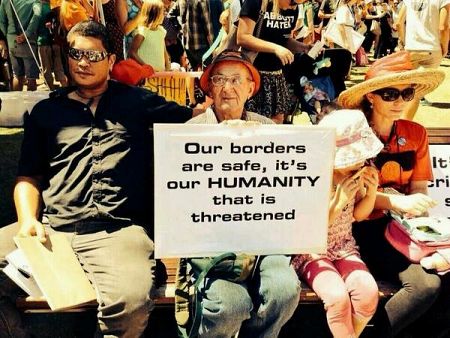 The final March in March will be at 10am today to Parliament House in Canberra. Details here.