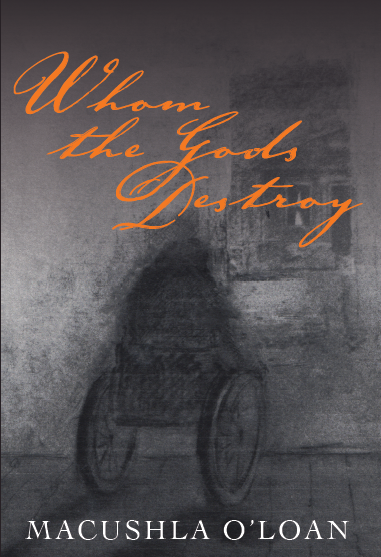 ‘Whom the gods would destroy, they first make mad’ is generally attributed to Euripides, one of the three great tragedians of classical Athens. And there is much of the Greek tragedy in Macushla O’Loan’s first novel Whom the Gods Destroy. Coincidentally, O’Loan – a NIDA graduate who has written for the stage (That Friday Feeling) – has given her observations of the ‘absurd, fantastic, bizarre’ a dramatic presentation.

Whom the Gods Destroy takes the reader into its dark underworld from the opening page, where an abused wife circles her paralysed husband’s bed. Artemis Colley now has the upper hand:

‘Poised and lynx-eyed, she leans across the frame and strikes him in the face. Then with a vengeful retribution she hits him hard again.’

It is no surprise that Artemis Colley has been driven mad by decades of physical abuse. It is no surprise either that her name is Artemis, the goddess associated with hunting and childbirth. Known in her mean suburban street as ‘the Greek’, we soon discover her heritage, her rape and forced marriage to her abuser, Michael Colley, the birth and quick death of their child. Thereafter, the long years of assault and its casual acceptance by the neighbours.

The terrain of the novel is the mind. The novel's physical location is O'Loan's own suburban Melbourne backyard, but her observations of the immigrant city provide only a sparely drawn background to the more intricate world of her characters’ minds and moods. Occasionally the reader is drawn into a present reality – as when a distraught Artemis walks ‘towards asylum’ – but, in much of the first half of the book, the action might be taking place on the pages of a William Faulkner novel. The world of Whom the Gods Destroy is Gothic.

Centre stage in the tragedy, the character about which it turns, is the grotesque Granma Alma Gane. She sits in her wheelchair by a window across the street from the Colley’s, observing all her neighbours, but Artemis in particular. She’s obsessed by the Greek and whether her obsession is another kind of madness later events in the novel will reveal.

Her foul mind and personal habits have darkened the lives of the family around her – her daughter Edna, Edna’s timid husband Jack Barwick, their twelve year old child Elizabeth. Alma corrupted her grand-daughter years ago, symbolised by a name change — Betty. Granma and Betty now exist in open warfare. Betty’s relationship with her parents is no better and she’s also in conflict with a previous best friend at school. Betty is a rebel. 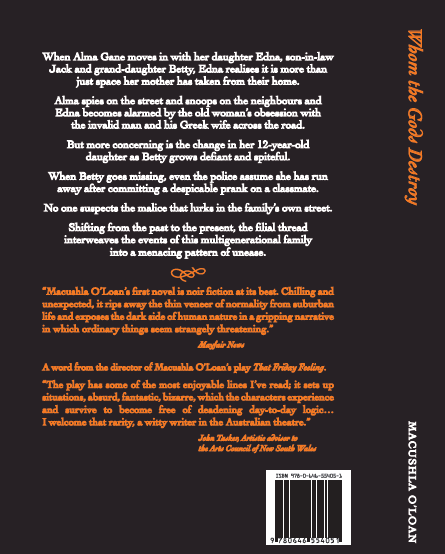 By the time of her disappearance, we know the characters’ histories. We also know Alma doesn’t need her wheelchair to get around, that she pries and snoops and steals. Betty has learned from her. We know Jack has retreated to the world of his backyard chicken coop, that his wife Edna is lost in the family conflict. Across the street mad Artemis is about to acquire a damaged soft toy monkey — a substitute for her long lost child.

In this bizarre situation, Alma crosses the street one Friday night to spy on Artemis, to discover the secret she imagines lies behind the bright, permanently closed curtains. The same night, Betty fails to come home from school, after promising her mother to help her shop in the city.

Thereafter, Whom the Gods Destroy becomes a more conventional novel of the psychological thriller variety, involving police and extra functional characters, as the mystery of Betty’s disappearance is unravelled.

Many readers will enjoy it. My own feeling is that O’Loan has missed an opportunity to create an even more arresting Gothic novella, by narrowing the story to the suburban street, to the two strange houses facing each other – the Colley’s and the Barwick’s – and to the histories of the protagonists that brings them to their necessary ruination. The stuff of Greek tragedy.