THE AMERICANS have a big day in the run up to electing a new president called Super Tuesday. On this day, a multiple of states have their primaries to begin the selection process for candidates.

I mention that because, on Wednesday last week, Australian sport had its own version: Super Wednesday. On this evening the State of Origin rugby league was on at Lang Park in Brisbane. The tennis at Wimbledon was moving forward. The Ashes test cricket series between Australia and England at Sophia Gardens in Cardiff began, and of course the Tour de France cycling was literally rolling along.

And the worst part was, out of all that, not one good result* was achieved.

So in no particular order, we begin.

NSW did not win game three of the State of Origin, and therefore didn’t go on to win the series which stood at 1-1 after game two. A NSW player wasn’t man of the match, and at full time in game three NSW coach Laurie Daley wasn’t happy.

That’s all I’m going to write about that and if any of you Queensland idiots* want to hear more you can write your own damn sports column.

In the tennis, Nick Kyrgios, the last surviving Australian in the singles went down to Richard Gasquet of France in the fourth round, in four sets. I had farmed out the tennis to a friend watching in Sydney who has greater knowledge of this sport. So then, when my friend sent this through to his Facebook page, it showed where it all went wrong for Kyrgios:

‘Kyrgios having a major tanty in the second set at Wimbledon. He needs to pull himself together otherwise this will get really ugly...’

He didn’t – well not greatly anyway – and ended up out of the tournament. So bad was his perceived attitude that he was booed while on court.

After the game Australian swimming legend Dawn Fraser made some controversial comments, reported to have said Kyrgios should "go back to where [his] parents came from."

Fraser has since apologised, which I feel is a good thing, because the last thing this country needs at this time of the Abbott Government is more racism. If Dawn had said he should play tennis with a better attitude that would have made more sense.

However Tennis Australia performance director, Pat Rafter, did say that, indicating that Kyrgios and Bernard Tomic had a less than good attitude to the privilege of playing tennis on the highest stages. Rafter referred to them playing with a sense of entitlement. Which is opposed to Rafter’s reported goal of producing players that can not only win, but which Australia "can be proud of".

Anyway, Wimbledon moved on, and the finals participants then won and lost their matches with a great deal less controversy.

Serena Williams won the women’s event, defeating Garbine Muguruza in straight sets, 6-4, 6-4. Muguruza was seeded 20 and so was a genuine underdog. She played well, but just couldn’t match the all around power and poise of Williams.

In the men’s event, it was the opposite, with the form book being followed. The final saw first seed Novac Djokovic against second seed and seven-time Wimbledon champ Roger Federer. Djokovic won in four sets and was a deserved winner of his third title.

So then we come to Sophia Gardens in Wales and the first test of The Ashes between Australia and England.

England won the toss and batted, and Joe Root, batting at five, led England to a formidable score of 430. Root compiled 134 and was well supported by Gary Ballance (61), Ben Stokes (52) and Moeen Ali (77).

Australia then reached the respectable score of 308 in their first innings, with Chris Rogers the main contributor with 95.

The colour, smell and story of Chris Rogers' arm guard by @ajarrodkimber http://t.co/Z1VpSI97gH

However, as dour cricket legend, and now lugubrious commentator, Geoff Boycott pointed out, the Australians only had themselves to blame for falling short of the English total.

For all of the batsmen got started, but then didn’t go on with it. Rogers fell short of a century, which often has a ripple effect on the psyche of the other batsmen and this ripple effect did seem to come to pass.

England went out for the second dig with a lead of 122 and scored briskly, at 4 runs an over, to post 289, with Ian Bell and Joe Root both scoring 60, while Ben Stokes added 42.

With Australia needing 400 plus in the final innings, this was always a difficult situation as the wicket has by now begun to deteriorate and teams scoring 400 or more in the fourth innings to win rarities in test cricket.

Australia started reasonably enough, but with the loss of Warner for 52 on 97, things began to go awry. The wickets began to clatter and when Haddin went at 6-122, it was clearly all over. Johnson top scored with 77 but it was too little, too late.

So, England won and this test may mark the end for Shane Watson. He has a congenital error in his technique, which leaves him vulnerable to leg before wicket dismissals. He went this way in both innings in this test and so will almost certainly lose his place to Mitchell Marsh for the second test.

Finally, the Tour de France — and again the team we least wish to see do well*, did just that. That is Team Sky and, not only are they English, but they’re sponsored by the Murdoch Press, so a double-ton of evil here. They wear black uniforms to complete the carapace of nasty.

The week of cycling was somewhat enjoyable to begin with as the German leader of Etixx-Quick Step, Tony Martin, taking the yellow jersey, following a blistering finish to win stage four. He looked good to hold the lead for the ensuing time in northern France, until he was involved in a crash at the end of stage six. He went down heavily, but picked himself up and was escorted home by his team mates using linked arms to physically propel him over the line.

However, the X-rays showed that he had broken his collar bone and so had to retire from the race. Thus, the yellow jersey fell by default to Chris Froome, the leader of Team Sky, who still wears it after the most recently ninth completed stage.

Froome and Sky (sadly) look very good to win the whole Tour as they are riding strongly and have a team in form.

The other major contenders, Alberto Contador for Tinkoff-Saxo, Nairo Quintana for Movistar and defending champion Vincenzo Nibali for Astana look out of sorts, and unlikely to test Froome in the Pyrenees and the Alps, where the race moves this week.

Possibly the best chance to displace Froome comes from BMC, led by American Tejay Van Garderen. So the mountains await and time will tell.

Tejay van Garderen, while happy with BMC's Tour, says the mountains will be the real test. http://t.co/hDmds3LvQT pic.twitter.com/1CldsHBfqZ

And now cricket moves to "headquarters" with the second test at Lords. Australian coach Darren Lehmann described the first test loss as merely a "minor hiccup", indicating that better is to come from Australia.

* Editor's note: This publication would like to make a sincere apology to any Queenslanders offended by the rather churlish and untoward outburst by Lachlan Barker in the State of Origin section of this report. Independent Australia, although national in nature, is, of course, proudly published on the Surfers Paradise in Queensland, with our servers located near Noosa on the State's Sunshine Coast. I'm sure that – perhaps after the disappointment of the record 52-6 drubbing the mighty Maroons gave an lacklustre, insipid and poorly disciplined NSW team last Wednesday night, which led to Queensland sealing an unprecedented ninth series win out of the last 10 Origin series fades – Lachlan may find the good grace to apologise to all of us aforementioned 'Queensland idiots'.

Lachlan Barker blogs at cyclonecharlie88.blogspot.com.au and you can follow him on Twitter@CycloneCharlie8. 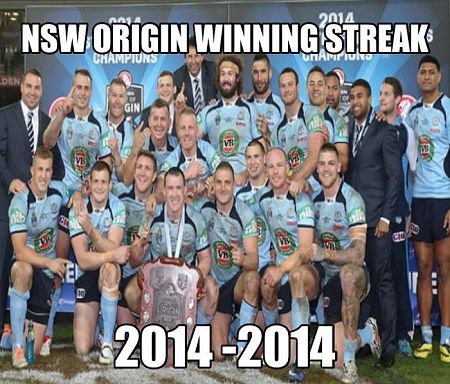 Get in the winner's circle. Subscribe to IA for just $5.