By Rocky Dabscheck | 24 September 2018, 12:00pm | comments |
Prime Minister Scott "ScoMo" Morrison addresses the nation from the grounds of Parliament House, with his fellow Parliamentarians standing behind him as several thousand onlookers listen from the grassy knoll. 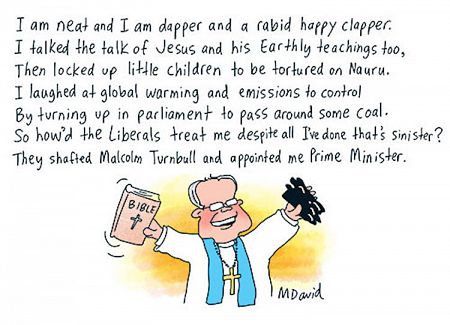 SCOMO: Today, I am happy to proclaim the Canberra Muppet Show is over. Kaput. Cactus. Discontinued. Yesterday’s news. I say Hallelujah! to that.

[ScoMo turns and raises both his arms in the air. The Parliamentarians behind him do the same and they all shout, "Hallelujah!" ScoMo faces the congregation on the grassy knoll.]

SCOMO: I am your leader. And to quote my favourite Aussie pugilist philosopher, “I love youse all”. That’s right. Even the deaf. Hence the sign language person. I don’t want people inflicted with a disability to feel their Prime Minister thinks they are second class citizens. We are all equal in God’s eye. My Christian values ensure I too, see all people, regardless of disability, or special need, as equal. I say Hallelujah! to that.

[He turns to the Parliamentarians and despite their thinning numbers, they let rip with another "Hallelujah!"]

SCOMO: My very own hero, John Howard, is severely hearing impaired. Funny — come to think of it, people hard of hearing say "sorry" a lot, when they ask you to repeat yourself. I can’t recall ever hearing John say sorry.

I am aware some among you fear I am guided too much by my Pentecostal Christian faith. Fear not. All religious belief systems shall guide not only me but the entire Cabinet. For this, I say, Hallelujah!

[The routine with his Parliamentary colleagues is repeated, despite several more having slipped away.]

We are a secular nation. For this reason, neither Tony Abbott nor Julie Bishop is in my Government’s Cabinet. Having me as a Bishop and an Abbot is more than enough.

As our nation’s Prime Minister, I want to perform a citizenship ceremony in front of you. I call Heng Yun Ng to come forth and receive his certificate of Australian Citizenship.

[A man of Asian appearance shyly makes his way forward and stands next to Father ScoMo. Two members of the military hold a wide rimmed water bucket.]

FATHER SCOMO: Are you, Heng Yun Ng, ready to become an Australian citizen?

[ScoMo grabs Ng by the back of his head and forces his face down into the bucket of water, completely submerging Ng's head in the water. He pulls Ng’s head back out of the water.)

ARCHBISHOP SCOMO: I declare you a baptised and naturalised Australian. Hallelujah!

[The remaining Parliamentarians, plus Ng, all repeat, "Hallelujah!"]

ELDER SCOMO: Off you go.

[A rather wet Ng rejoins his family in the by now, thinning crowd.]

RABBI SCOMO: The ScoMo Government will reflect our nation in our entirety. For instance, we have Kelly O’Dwyer, Marise Payne and Michaelia Cash in our Cabinet and none of them is a man And we have Josh Frydenberg — he’s a man but he’s not a Christian. Talk about diversity. Hallelujah!

[ScoMo turns to the parliamentarians and notices Julia Banks, Ann Sudmalis and Lucy Gichuhi slinking away.]

CARDINAL SCOMO: Julia. Ann. Come back. Where are you going? And Lucy. You stay put! Lucy! Lucy!

[Lucy stops in her tracks, turns around and moves back to the line of Parliamentarians. Julia and Ann keep walking. ScoMo then notices there are no other female members of his Government standing in line. ScoMo turns and faces the quickly shrinking congregation on the grassy knoll.]

IMAM SCOMO: Where have our women gone? I know it’s been a long week, but this is ridiculous. We are a secular nation. Unlike many religious organisations, we are allowed female ministers. Seriously, this isn’t a good look.

We need our women. Women are wonderful people. My Mother is a woman and she begat me. My wife is a lovely woman who begat our two daughters. And they will become good women and beget children of their own. And I say, Hallelujah! to that.

[Scomo turns to observe the remaining Parliamentarians lethargically raise their arms and say, "Hallelujah". He turns back to the ever-contracting congregation.]

Some Australians are confused about @ScottMorrisonMP’s evangelical faith and the role it plays in his politics. Christian rock duo #TheShadowMinisters explain through song #Tonightly pic.twitter.com/ISMnRxEekL

REVEREND SCOMO: You have been out here for some time. You must be feeling hungry. I’m hungry for a prosperous, privately educated Australia. And I say Hallelujah! to that.

[A handful of Parliamentarians flap their arms and quietly say, "Hallelujah".]

AYATOLLAH SCOMO: Australia’s Government needs its women. I love my fellow Australians. You are hungry. We’ll feed you. Ten packets of lamingtons and ten punnets of strawberries shall be distributed to curb your hunger. I call upon the women in our Government to hand out this food to you who are congregated here. Liberal and Coalition women — come forth and distribute.

[No women step forward to handle the food parcels. ScoMo turns to see a line, exclusively of men, standing behind him.]

GRAND MUFTI SCOMO: Women. Where the bloody hell are you? If only more women were seen as the best man for the job.

[He faces the now quite sparse congregation on the lawn.]

ABBOT SCOMO: I want to say Hallelujah to you Josh, but I believe that would be wasted on you, so instead I say, mazeltov.

FRYDENBERG: My pleasure. Lamingtons? Strawberries anyone? Take your pick.

HIS HOLINESS SCOMO: While Josh hands out your food I want to tell you about my dream of last night.

I have a dream that every Australian, regardless of their colour, creed, religion, ethnicity, gender, sexual preference or socioeconomic demographic will vote for me, ScoMo the Baptised at the next election.

[Upon saying these words, ScoMo becomes enraptured and starts speaking gibberish. The stragglers still on the grassy knoll, scarper at the rate of knots leaving ScoMo wailing in tongues to a near-vacant hill. All the Parliamentarians have also fled the area.

The sign language interpreter standing next to ScoMo shrugs in exasperation.]

SIGN LANGUAGE INTERPRETER: Fucked if I know how to sign Tongues. And I say Hallelujah! for that.