Most coronavirus statistics are depressing – but not all

The global pandemic continues to ravage the world with ever-increasing infection numbers but there may be signs of hope, writes Alan Austin.

DID YOU KNOW that 37 countries with more than four million people still have not recorded a single coronavirus death? Did you know four countries now have more recovered patients than those currently infected?

Does this mean the end is in sight? When will this happen? And how can we be sure?

This column often analyses obscure statistics to reveal things about the economy some people do not know. We can try the same with the available coronavirus data.

The last week’s updates on the pandemic have mostly been gloomy. Infections in the USA clicked over 100,000. Total infections exceeded 660,000. Deaths in Italy topped 10,000. Worldwide, deaths exceeded 30,000. Australia’s death toll doubled from seven to 14. But there was also good news, as we shall see.

This analysis, as with all slicing and dicing of stats, makes assumptions. We are accepting the validity of the numbers provided. There is no certainty, however, that they are all up to date and reliable. Data used here was current at the time of writing (midday Sunday 29th March ET). Updates are available here.

Nations across the globe are experiencing vastly different impacts. Italy, Switzerland and Spain have been devastated, while Canada, Japan, New Zealand and others have been substantially spared — so far. Worldwide, the numbers of infections, deaths and recoveries are climbing steadily.

Infection rates for countries with more than ten million inhabitants are shown in the silver chart, below: 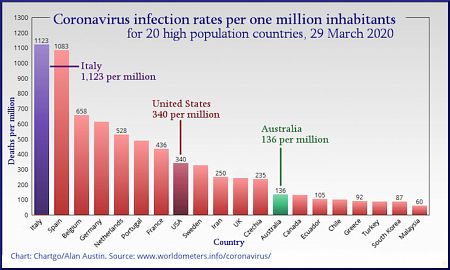 A spike in infections does not mean the virus is suddenly spreading more rapidly. It could mean simply that more testing was done than previously. This happened in Australia on March 22 when a record 537 new cases were reported. That flowed from increased testing on that day.

The top 20 countries are shown in the pink graph, below. Australia with 0.55 does not make this group. 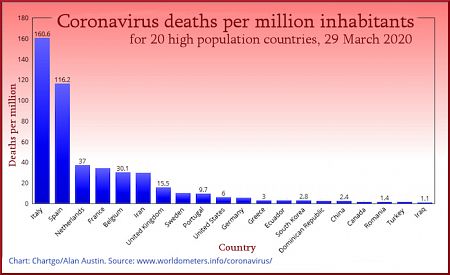 When we look at the shift over the last week, however, a different ranking emerges again. The country with the worst increase in the death toll since 21 March is Portugal, up from six to 100 at last count, a rise of 1,567%. Next comes Turkey with a 1,100% increase from nine to 108. Then comes Brazil, Belgium and the USA. The top 20 large countries – with populations above ten million – are shown in the green graph, below.

The USA has seen a huge rise from just 275 a week ago to 2,211 as this is written. That is a disturbing outcome for a country so far from the epicentres, China and Italy, and which claims to be a global leader in medical research and technology. This has fuelled considerable debate about the adequacy of the Trump Administration’s responses. 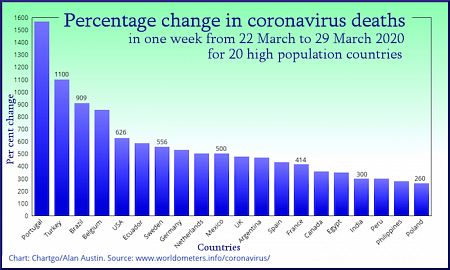 The data shown here does not identify the factors which affect the death rate including:

In the last week, the Chinese city of Wuhan was reopened and many residents – some of them recovered coronavirus sufferers – returned to try to resume normal life. Bahrain, South Korea and the Maldives joined China in recording higher numbers of recovered patients than those still battling the infection.

Countries with zero deaths — so far

Among highly or very highly developed countries (UN classifications) with populations above four million, six countries have recorded no deaths so far. They are New Zealand, Belarus, Bolivia, Georgia, Oman and Slovakia.

Surprisingly, few infections and deaths have been reported in Africa. Libya has a population of ten million and is geographically close to Italy, but has reported only one infection. Ethiopia has a population of 160 million and is not far from Iran, but has reported 16 infections but no deaths. Other large African countries with few infections and no deaths include Uganda, Tanzania, Mozambique and Angola. It is highly likely, however, these countries are not yet effectively monitoring, treating and reporting the virus.

The Economist has just published an analysis of the risk to poor countries, which concluded:

'So covid-19 could soon be all over poor countries. And their health-care systems are in no position to cope. Many cannot deal with the infectious diseases they already know, let alone a new and highly contagious one. Health spending per head in Pakistan is one 200th the level in America. Uganda has more government ministers than intensive-care beds.'

Two countries now have graphs of daily new infections showing near-perfect bell-curves. They are China and South Korea. Relative to their high populations, new cases reported each day are now very low. Current active cases in South Korea, at 4,523 as this is written, are fewer than the recovered cases, 4,811. 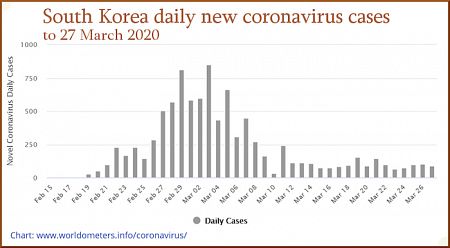 So there is hope. South Korea and China, along with New Zealand, Japan, Bahrain, Singapore and some others, show that infections – and eventually deaths – can be curbed with the right policies, when implemented in a timely manner.

Unfortunately, few countries have acted as swiftly as these. Australia is one of many which have not.

This by Michelle Pini pretty much sums up the reason for the Morrison Government's lacklustre response to COVID-19 and the bushfire crisis:
'Coalition, conservatives and the great unwashed PR campaign' https://t.co/ec6oIvE4Y0 @IndependentAus @VMP9