Following the release of the film, Suffragette, La Trobe University's Janna Thompson asks whether the militancy of these suffragettes was justified.

BETWEEN 1912 and 1914, a group of British suffragettes called the Women’s Social and Political Union (WSPU) launched a campaign of militant action. Led by Emmeline Pankhurst, they avoided harming people but committed various crimes to draw attention to their demands and put pressure on the government. Suffragette (2015), now in cinemas, shows this part of British women’s struggle for the vote.

Was the militancy of these suffragettes justified? The film portrays the frustration women experienced when their peaceful protests and participation in parliamentary enquiries failed to get the desired results. Faced by a government that seemed bent on denying suffrage to women indefinitely, the WSPU decided that more radical forms of protest were necessary.

Militant suffragettes destroyed contents of letterboxes and smashed the windows of thousands of shops and offices. They cut telephone wires, burned down the houses of politicians and prominent members of society, set cricket pavilions alight and carved slogans into golf courses. They slashed paintings in art galleries, destroyed exhibitions at the British Museum and planted bombs in St Paul’s Cathedral, Westminster Abbey and near the Bank of England.

The film features the most famous act of the militant suffragettes — Emily Davison’s disruption of the Derby at Epsom by throwing herself under the King’s horse. 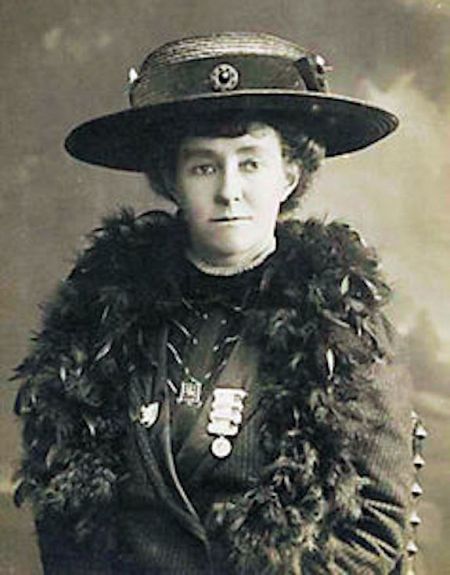 It is estimated that their campaign of destruction caused between £1 billion and £2 billion worth of damage to property in 1913-1914.

The suffragettes aimed their violence against property, not people. Nevertheless, their actions satisfy common definitions of “terrorism”. The Australian Criminal Code, for example, defines a terrorist act as an action done with the intention of coercing and intimidating a government that causes serious damage to people or property.

Pankhurst, a canny political operator, knew that their cause had to be kept in the news if it were to succeed:

The prominent politician Lloyd George, generally a supporter of votes for women, thought that the actions of the militants were ruinous to their cause. Some members of parliament declared that the militant acts proved that women were unstable, hysterical and not to be trusted with the vote.

When World War I began the WSPU suspended its militant activities and joined the war effort. In 1918 the British parliament recognised the contribution of women to the war effort by giving the vote to women older than 30 who also owned some property. Ten years later all women in Britain gained the vote.

Historians are divided about whether militancy helped the cause of women’s suffrage. Some believe the achievement owes more to the non-militant wing of the suffragette movement led by Millicent Fawcett. But the official justification for giving women the vote does not exclude the likelihood that many parliamentarians were moved by the fear that suffragette militancy might resume.

Even if militancy was a factor in bringing about reform, moral question marks hang over the actions of the WSPU. 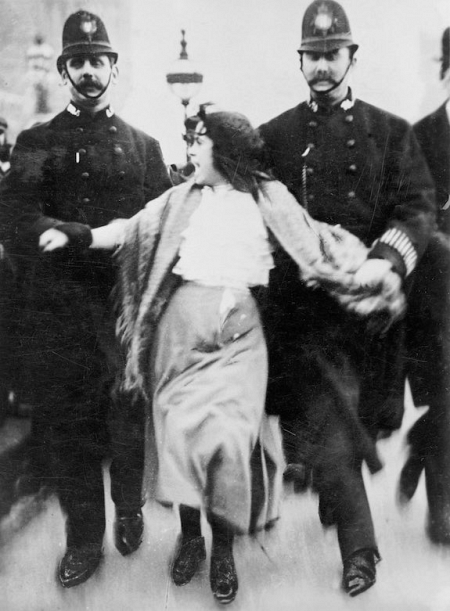 Policemen arrest suffragettes prepared to go to prison to get the vote. (Image via mashable.com)

The moral acceptability of the campaign depended on the fact that they avoided actions that could cause harm to people. Except for Emily Davison, who chose her manner of death, no one was killed. The destruction of property caused loss of money and inconvenience, but no serious harm to the public. Suffragettes attacked cricket pavilions and letterboxes, not hospitals or military installations.

But arson and bombs have the potential to hurt innocent people. A police inspector points this out in Suffragette. He asks the women suspected of burning down a country property, “What if a servant girl had unexpectedly returned to the house?”.

Whatever good the suffragettes thought they were accomplishing has to be weighed against the risk that they posed to members of the public.

There is another reason to be critical of the actions of the militant suffragettes. The aim of the movement was to allow women to play a role in the government of their country. There is a tension between this aim and the violent law-breaking activities of the WSPU. Those who want to participate in making laws ought to distinguish themselves from revolutionaries who want to destroy a government or force it to serve their will.

Civil disobedience has a role to play in a democracy. The Selma freedom march led by Martin Luther King Jr. defied the law and the political authorities of the segregationist South. But King and his followers thought it was important to show respect for democracy and the rule of law by demonstrating peacefully.

The parliamentarians who declared the militant actions of the suffragettes showed that these women were unfit to have a vote were, of course, serving their own political purposes and pandering to the prejudices of many of their constituents. Nevertheless, they had a point.

Note: For a full list of countries and dates suffrage was introduced, see here.

Confronting gender inequality since the Suffragettes: progress has been slow and uncertain https://t.co/zWTpM5y5Lz pic.twitter.com/FmNAkf7avY