Happy Christmas! But maybe not for Michaelia Cash, with this takedown based on her cringeworthy August CFA interview with David Speers coming in #8 on the list of IA's most read stories for 2016.

IN AN INTERVIEW described by observers as both “excruciating” and "a trainwreck”, Federal Employment Minister Senator Michaelia Crash … sorry … Cash, got herself into a dreadful tangle on Monday (22/8/16) trying to explain the need for new laws to regulate Victorian firefighters.

One of the few bright spots in the Coalition’s dismal election campaign was Malcolm Turnbull rallying with Country Fire Authority (CFA) volunteers and staff in Victoria. Administrators of the CFA were then up-in-arms about a new enterprise bargaining agreement, which was said to put more power into the hands of the United Firefighters Union. Turnbull said he would legislate to prevent this from happening and this anti-union posturing played well in the Murdoch media, possibly saving the Liberals at least one seat in Victoria.

Having promised to deliver this legislation and despite doubts about its constitutionality, Senator Michaelia Cash came onto Sky News' PM Agenda to spruik its credentials.

And that’s when things all started to go wrong…

Observing Michaelia Cash navigate a media appearance is always a testing experience. Made famous through a screeching, clawing Senate speech many likened to her being “possessed by the devil”, and with a speaking voice described variously as “Kath and Kim”, “fingernails on a chalkboard” and “Barina pulling a caravan up a hill”, Cash consistently begins behind the eight-ball with the hearing-able public.

Moreover, David Speers has a history of tripping up Federal ministers. He made a fool of Bill Shorten during the Gillard years (whatever she says!), and his celebrated “metadata” interview with George Brandis probably still has “Soapy” wincing when he hears the offending term. So, Cash may have been apprehensive even before taking her seat across from Speers in the Sky studios on Monday afternoon.

As you might expect, Cash began the interview awkwardly.

After an elongated introduction, Speers greeted the senator, to which Cash responded with a sort of vertical Nazi salute. 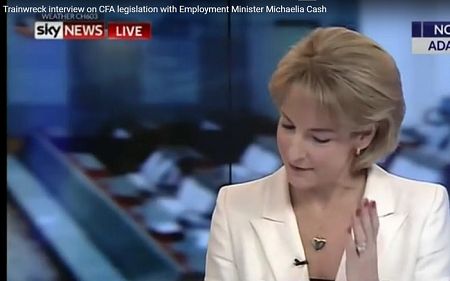 This suggested poor media advice. Some things are better left in the party room.

Then Speers asked why the legislation was necessary. Cash responded with the forceful eye-contact, exaggerated enunciation and energetic hand movements of someone earnestly trying to provide a general outline of quantum mechanics to the household Labrador. 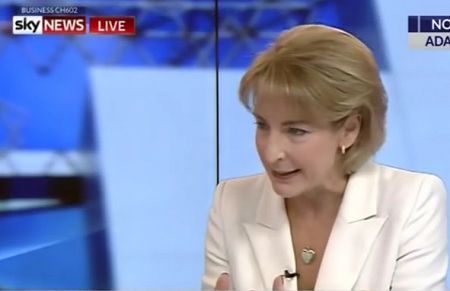 After detailing a few basic talking points, Cash then went to the legislation itself.

“This is it,” she said, proudly waving a thin document in the air to show to Speers, visible yellow highlighter and all. 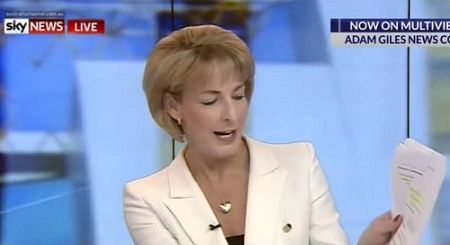 In a theme she was to return to a number of times, Cash lauded the small number of  amendments to the Fair Work Act in the proposed bill, saying

Unfortunately, though, things were just about to get a whole lot thicker.

Cash utters a few vague talking points before throwing caution to the wind and attempting to wade into the detail of the EBA in question:

Yes, this is the main sticking point, agrees Speers, but what does it really mean?

“But what’s your interpretation of it,” Speers asks. 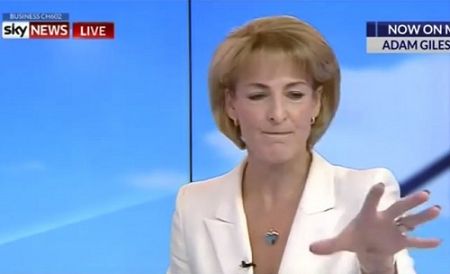 Cash does not explain why the car fire needs to be put out twice, nor, indeed, how the vehicle miraculously reignites like a novelty candle.

Instead, she attempts to elucidate the new state of affairs:

“… seven professional firefighters need to be despatched before the commencement of safe firefighter operations.”

But what are "safe firefighter operations", asks Speers?

Cash, apparently a practicing lawyer before entering politics, flicks through the document aimlessly.

“Well, I can’t find it at all within this agreement,” she replies, pointing down at it with both hands, as if casting a hex on its progenitors. 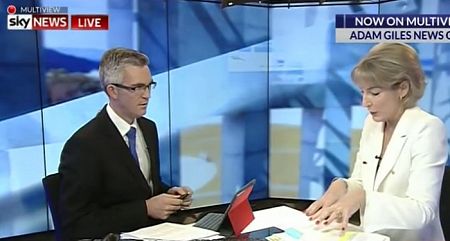 It was here that Speers finally forced Cash off the road and into an ironbark on the side of the highway.

Studiously looking down at a document and pointing at it with a pen, Speers casually sideswipes the minister:

“Clause 7a of this agreement says it does not require seven firefighters to be physically present at the fireground before actually commencing firefighting operations.” 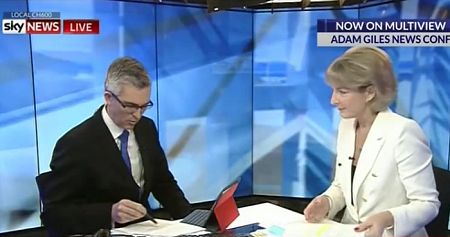 This unexpectedly good legal work from the faithful Labrador causes immediate panic from Cash, whose gesticulations turn from frenetic to frenzied.

“Well, when you actually read this agreement, a number of the clauses intersect and it’s certainly being raised by…” babbles Cash.

“Have you read the agreement now,” Speers interrupts.

“Well I have the agreement in front of me,” gestures Cash, unnecessarily.

“Because you hadn’t read it this morning. You said you’d been briefed on it.”

“Oh, but I had read it this morning,” pants Cash, “and then been briefed on it.”

Watch me skillfully turn pages & say I'm not sure about that as @David_Speers made me look unprepared & unconvincinghttps://t.co/NwwO3zTTfw

It’s a fundamental change, she bleats!

But how, replies Speers.

Sensing utter calamity, Cash struggles to get out of the car, but finds she is pinned behind the steering wheel:

“The CFA board that was sacked can’t be wrong. Jane Garrett, the minister ‒ and not one on my side of politics ‒ she was so offended by what was going on she was forced to resign.”

“Well, can the chief fire officer at the CFA also not be wrong, because he says this proposed agreement won’t affect his ability to direct the fire,” asks Speers.

Sirens can now be heard in the distance, as Cash brings up other officials to support her argument. Speers helpfully agrees there are “differing interpretations”. Cash thinks Speers is about to assist her, but then notices he is holding a jerry can. 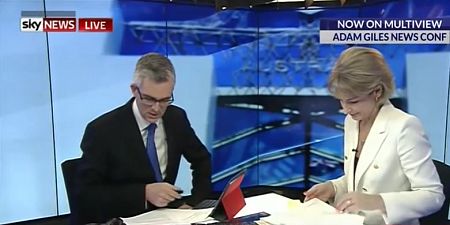 “Let’s get further into the detail,” says Speers, splashing petrol on the bonnet. “Clause 7a(1) says the role of volunteers in fighting bushfires and maintaining community safety … is not altered by this agreement.”

“Well, I com-plete-ly disagree with that clause,” nasals Cash, before upping the ante yet again:

“Can I just say, 60,000 volunteers can-NOT be wrong! When you read the different clauses within the agreement. They intersect!”

“But what’s the one that worries you most?” asks Speers:

Ah yes, we all know this legal argument. It’s the vibe, your honour!

And it is now, in the interests of good taste, with Speers patiently and relentlessly posing the same obvious question ‒ why is this legislation needed ‒ and Cash chittering about the brevity of the legislation, and chattering on about how she has spoken to hundreds, nay, thousands of volunteers, including someone called Don – all of whom, apparently, "can't be wrong" – that we draw a discreet veil over the remainder of this unfortunate incident.

The good news is that after the flames were extinguished ‒ twice, as per regulations ‒ and the jaws of life administered, Cash was able to be successfully pulled from the smoking wreck.

Yes, she suffered severe third degree burns and the effects of inhalation, and is now said to be in a serious but stable condition — but with a full six year term in the Senate in front of her, she is expected to make a near full recovery.

And with drivers like this behind the wheel, the IA Forensic Crash Scene Unit expects to have a lot of work to do in this term of Parliament.

You may watch the full interview below — if you dare!

All I'll say about Michaelia Cash's interview with Speers is that I can see why both she and Brandis gave up practicing law to try politics.

Independent Australia supporters and members can also listen to managing editor Dave Donovan in his weekly podcasts in IA's Member's Only Area.

@independentaus @davrosz Just about to read this, did you see this Dave. https://t.co/G76ghgnBSI 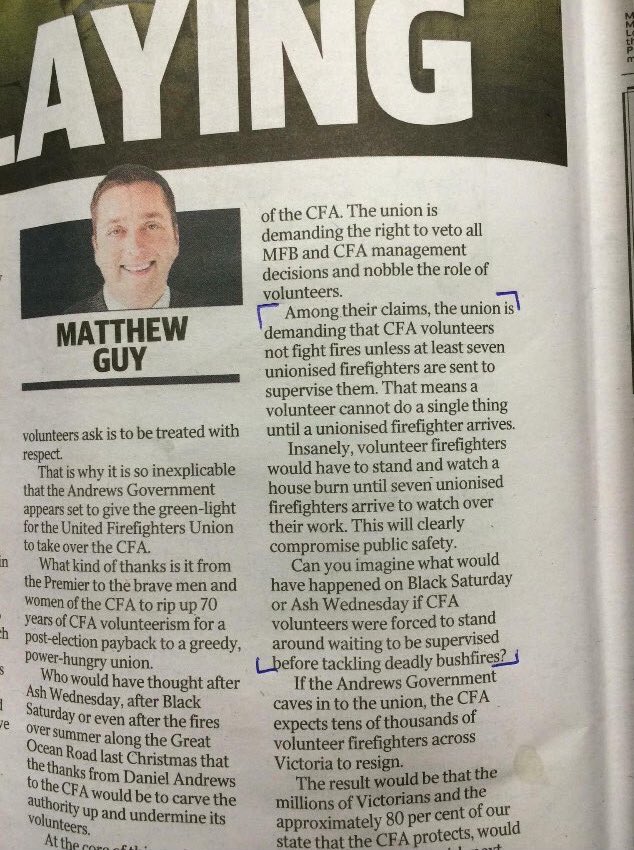