In the wake of the Charlie Hebdo, there is renewed support for the notion of untrammelled free speech without any responsibilities — Arrin Chapman says this is dangerous, selfish and shortsighted. 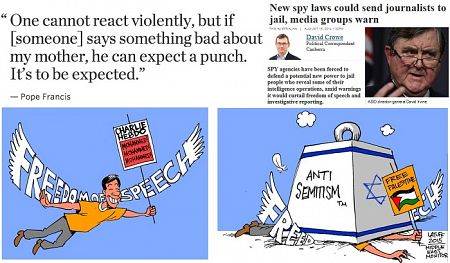 How absolute is the right of freedom of speech — and how hypocritical are some of its most vocal proponents?

THERE IS A PREVAILING VIEW in our society that “freedom of speech” is an inalienable human right.

This assertion is apparently backed up by a majority of free thinking individuals, governments and human rights organisations. Indeed, there is a Universal Declaration of Human Rights that enshrines this notion in international law.

This, however, is only one side of the coin.

What is often lost in discussions about free speech is the responsibilities inherent in the possession of such a freedom. Freedom does not legitimize the unchecked power of every person to be free to do as they please, for that would be chaos and would end in the strong dominating the weak through brute force.

True freedom is a construct that allows, ideally, every person to live without fear of persecution. It requires every person to take into account others when considering the impact of an action or decision.

This is why we need, here in Australia, key legislation like the Racial Discrimination Act to guide us around the tricky grey space that is free speech versus freedom from discrimination and vilification.

The idea that media organisations such as Charlie Hebdo have a right to publish offensive and discriminatory material, as put forth by people such as former NSW Solicitor-General Michael Sexton, flies in the face of this idea.

This is not to say that criticism of ideas is not valid — in fact, it is the way that societies progress. New ideas are created through the criticism of the old. The current debate on same sex marriage is a perfect example of this. Without freedom of speech this topic would be unassailable and the section of society oppressed by the traditional ideas of marriage would not have a voice.

However, Charlie Hedbo does not give a voice to oppressed members of society or seek to create a dialogue. While it seeks to make social and political comments, it instead attacks sections of society in a blunt and simplistic manner equivalent to penis drawings in toilet blocks. The Boko Haram cover with its racist colonial era depiction of Africans is a perfect example of this. It is the equivalent of using black face to demonstrate the point of view of a racist bogan. Though ironic, it nevertheless crudely reinforces racial stereotypes and there are more sophisticated ways to make the same point with humour.

In relation to the Prophet Mohammed there are some addition considerations that must be taken in to account when arguing, as many have, that this publication attacks all religions equally and therefore is a pillar of free speech.

The Muslim population of France is comprised largely of post-colonial Africans and Arabs who are already marginalised both socially and systemically. As such, it is a subject that needs to be treated with great sensitivity.

While Charlie Hebdo claim to have depicted the Prophet in order to ridicule extremists, this depiction instead simply serves to further disenfranchise the already marginalised Muslim community of France. This, of course, does not mean they deserved to die — of course not. The response was horrific, deplorable and unconscionable, and the actions of the extremists responsible should rightly be condemned. This does not exempt Charlie Hebdo, or any other publications, from the responsibilities of freedom of speech, nor make them immune to the criticism that reinforcing ethnic stereotypes further alienates marginalised sections of society that extremist groups feed on.

Since these attacks, there has been discussion around a key piece of legislation in Australia. Unlike France, Australia has no explicit reference to freedom of speech in its Constitution. In some ways, this simplifies discussion around these issues as there is no historical precedent to fall back on when arguing for the relaxing the laws around discriminatory speech.

In this country, the key piece of legislation forcing publications and commentators alike to consider whether they are causing racial offence or making a legitimate point is the Commonwealth Racial Discrimination Act 1975. The importance of this legislation ‒ and specifically its much debated Section 18C ‒ is in holding people to account. In this way, we force influential people to consider the rights of others and the impact of their words.

One need only cast their mind back to Alan Jones’ remarks in 2005 and the situation that unfolded in Cronulla soon after for an example of why this is necessary.

The purpose of moderating free speech, then, is not to limit discussion but to maintain a degree of civility and moderation when discussing emotionally loaded subjects. It is also to avoid the sweeping generalisations that come of a lazy mind.

It is a truism that emotion comes more easily than considered thought and this is clearly demonstrated in not only the Je suis Charlie campaign but also in Charlie Hebdo’s subsequent response to this attack. The imperative question of why this has happened has been all but drowned in seas of emotional reprisal, both in the destruction of Muslim edifices and marches proclaiming solidarity behind this nebulous version of free speech — a version that allows racism and bigotry to be passed off an inherent human right.

In the end, what we need to remember is that freedom of speech is both a right and a responsibility. In order to live in a cohesive society, we need to consider the most marginalised and construct strategies to alleviate, not exacerbate, that disenfranchisement. Reactionary responses inevitably result in deeper division and a stronger “Us versus Them” mentality, which those who wish us harm can exploit to achieve their aims.

Perhaps it is time we stopped reacting and started analysing how we want to define our freedom. 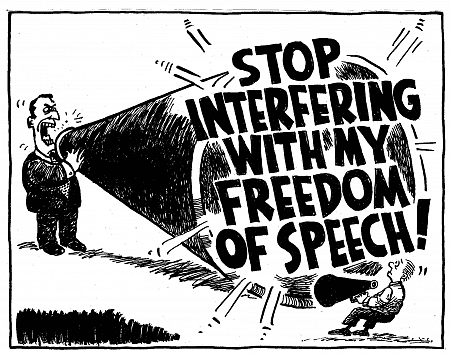