In the brouhaha following Zaky Mallah's appearance on Monday's Q and A program, little attention has been given to MP Steven Ciobo's part in the exchange or the point that Mallah was trying to make. Arrin Chapman reminds us of the importance of avoiding disenfranchising those young Muslims already marginalised.

One of the interesting things about the furore over Zaky Mallah’s question and the following exchange on Q&A on Monday is how little discussion there has been about Steven Ciobo’s part in the exchange.

The question from Mallah was what would have happened had his case been decided by the minister rather than the courts (which acquitted him of terrorism).

The response from Ciobo, live on air, openly threatened the freedom of a man who was acquitted of terrorism charges yet there’s been little discussion how this reflects on the government’s proposed anti-terror laws.  Nor how such a remark could easily have provoked the response it did from Mallah (that such attitude could incite young Muslims to go off and fight for Islamic State.)

‘My understanding of your case was that you were acquitted because at that point in time, the laws weren’t retrospective.

But I’m happy to look you straight in the eye and say that I’d be pleased to be part of the Government that would say that you were out of the country, as far as I’m concerned.’ 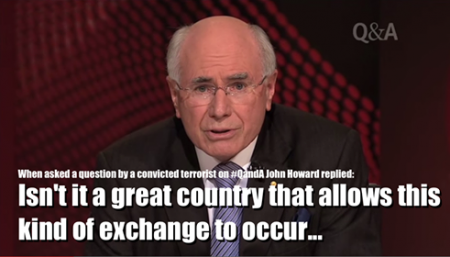 So, even though Mallah was acquitted of terrorism, were Steven Ciobo the minister responsible, he would have had him exiled.

If Ciobo’s opinions are indeed indicative of the government's, then we should be worried about the amount of power this government has in its pursuit of national security — and perhaps Mallah has a point about further disenfranchising Muslim youths.

Zaky Mallah is the perfect example of a man with an opinion on the direction his country is taking but has difficulty articulating his ideas. He is political engaged but not equipped with the rhetoric and nuance to be part of a debate on a forum such as Q and A. This lack of political articulation seems to be what Waleed Aly was attempting to get at recently on the Project.

This, however, does not make his ideas any less valid, especially considering this is hardly the first time that someone has expressed a controversial or even offensive opinion on Q and A. The astronomically disproportionate reactions from the government and the Murdoch press to his comments is proof of this. The government’s rush to discredit him and use as a tool to sow fear in the community shows just how necessary it was that Mallah spoke up.
Zaky Mallah: ISIS propaganda is bullshit and we should let foreign fighters return to help stop others being radicalised.

The first red rag should have been when Ciobo told Mallah he was…’not familiar with the circumstances of your case', then proceeded tell him that he would be…'happy to look you straight in the eye and say that I would be pleased to be part of a government that would say that you're out of the country as far as I'm concerned.’

Mallah was acquitted by the High Court and is a sole Australian citizen. While it is no secret that the current government would like the power to strip sole citizens of their citizenship, Ciobo who by his own admission is not familiar with the case, is more than happy to see this young man made stateless. His reasoning appeared to come down to the fact that Mallah in 2003, then 19 years old, had been convicted on the non-terrorism related charge of ‘threatening violence against a Commonwealth official’ and a technicality he could not articulate because he was not familiar with the case.

Was Mallah guilty of being a stupid teenager who threatened to kill ASIO officers? Yes. Was he worth ASIO keeping an eye on? Yes. Should he be stripped of his citizenship and exiled? The High Court acquitted him of terrorism charges as they felt that he had no intention of following through with his threats and as such, if we believe in the rule of law then, no. Ciobo’s comment demonstrates the level of power that he would be happy for the Commonwealth to wield were he to have the opportunity.

As the Prime Minister has not moved to distance the government from these comments we can only assume that this is a sentiment that he agrees with. This is a problem: if we start circumventing the rule of law in an effort to protect the nation then what is to stop the rapid decent in to a pseudo dictatorship where people simply disappear.

Tony Abbott, for his part has begun waging a war of libel and using it to attack one of the last bastions of balanced press, the ABC. His comment that,

demonstrates just how far he is willing to go to attack his enemies if he thinks he can get away with it. Not to mention, unlike Mallah, the Prime Minister puts remarks such as this out into the public arena in the full knowledge that they are inflammatory, simplistic and exaggerated.

What better way to silence dissent than to say "Heads should roll at ABC" over the Zaky Mallah matter. Remember this at the early election

At no point has Mr Mallah ever indicated that he supports terrorists or terrorism. In fact, he has repeatedly stated that he does not support ISIS, accusing them of ‘hijacking Islam'. This transparently open willingness on the part of the Prime Minister to lie about those who criticise his regime coupled with Ciobo’s comments should raise serious concerns about the march toward further impingements on civil liberties in this country.

The last thing this country needs is further division. Mallah was right on one thing. Attitudes like those so casually expressed by Ciobo toward Mallah do have a negative effect. It is an effect that I, as a teacher, have often seen in dealing with disengaged students.

It is brutally simple, if the students see that you don’t care then they will respond in kind. The key is to find a way to make disenfranchised people feel relevant and accepted.

Ciobo demonstrated in his interaction with Mallah that he had no interest in understanding the complex reasons that may have led Mallah or any other young Muslim to consider participating in violent action against the state.

This is the root of what Mallah was trying to (admittedly poorly) articulate and what has been lost in the smoke screen created by attacking both him and the ABC. The Liberal party is not interested in the whys of radicalisation. It is only interested in the punitive measures that further marginalise an already marginalised section of our society.

Recommended further reading in IA on the 'need for non-coercive community engagement to stop radicalisation of Muslim youth' by Parashar Das.